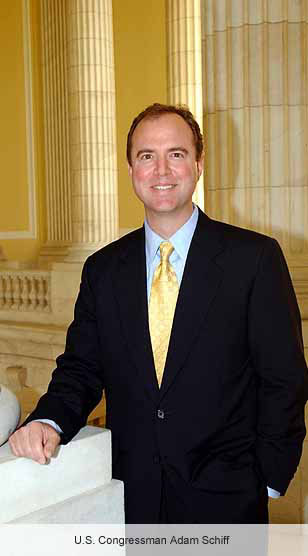 Congressman Adam Schiff has called on President Barack Obama to recognize the Armenian Genocide in a column that appeared Wall Street Journal on April 4, 2009, just a day before the President was set to visit Turkey on his first overseas trip since taking office earlier this year.

“No American president since World War II has come into office with a stronger understanding of the facts about this terrible chapter in history,” Schiff said. He also touched upon the fact that as a presidential candidate, Mr. Obama argued that “America deserves a leader who speaks truthfully about the Armenian genocide and responds forcefully to all genocides.”

Schiff went on to point out how Mr. Obama’s words reflected a powerful personal commitment and how Turkey has circumvented the issue of recognition when it comes to the genocide.

For over 90 years, Turkey has refused to recognize this dark chapter of its Ottoman past, and apologists in this country have abetted its campaign of denial with an ever-changing litany of reasons why this year is simply not the right year for recognition. True to form, opponents now argue that recognition would torpedo recent efforts by Turkey and Armenia to reconcile and reopen the border that was closed by the Turks in 1993.

Armenian officials reject this argument. In a recent letter to Congress, Armen Rustamyan, the chairman of the Armenian parliament’s foreign relations committee, expressed confidence “that the recognition of the Armenian Genocide by the United States would not only not hamper, but on the contrary will contribute to the prospects of a thorough dialogue between Turkey and Armenia.”

Schiff, a Democrat who represents California’s 29th congressional district which includes Alhambra, Burbank, Glendale, Monterey Park and Pasadena, also called on the fact that our failure to speak plainly on past genocides has impaired our ability to take action against other genocides like the killings that have taken place in Darfur.

In a news conference with Turkish President Abdullah Gul,  Mr. Obama stood by his 2008 assertion that the killing of the Armenians by Ottoman Turks in 1915 constituted “genocide,” however he did not repeat the word, reports BBC News.

Schiff has been a leading voice in Armenian-American issues and has strongly pushed for signing of the US House Resolution 106 recognizing the Armenian Genocide.

Below is a clip of Congressman Adam Schiff questioning Secretary of State Rice on the Administration’s opposition to recognizing the Armenian Genocide in 2007.

Listen to This: Diane Minassian and Vincent Baguian’s French-Armenian Duet