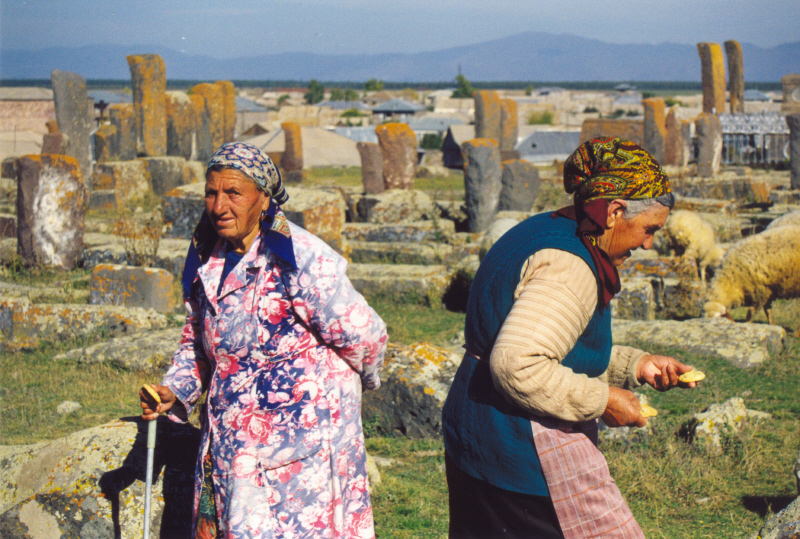 There long has been a phenomenon that not just myself, but countless other Armenians have taken note of, those ubiquitous floral patterned dresses that older Armenian women seem to wear. Whether they are at the store, at a church bazaar, a kef or anywhere else, they wear these things all the time! I have a feeling there is some rite of passage for Armenian women regarding this thing. You would think some people might catch on to new fashions yet women take after their mothers and continue this tradition of dressing like their grandparent’s generation.

There is this feeling in the pit of my stomach that today’s Armenian girls, despite their UGGs and Juicy Couture pants, will inevitably grow into this fashion faux pas . There’s the pattern with the dresses, they are usually accompanied by those bland orthopedic shoes and dark stockings and I can’t forget to mention some of the tacky jewelry as well. I’m going to tell one of my stories about these dresses, a quick one that some of you can relate to. I went to one of the church bazaars during this past summer with my mother and grandmother, letting my grandmother drag me around, introducing me to some of her friends. They all tell me they remember how little I was, kiss me on both cheeks and pinch me and they all wore those dresses but this is not the clincher. After leaving the bazaar, we went to another one but thought it was closed so we continued home and at a stop light me, my mother and grandmother look over. There they were, three older women, all slightly overweight, floral dresses, and all making eye contact with us. It was at this moment everyone in the car knew that these women were Armenian. We did not know them, we did not see them at the bazaar, but we could tell that they were Armenian because of how they dressed and I find something hilarious yet disturbing about that fact.

It was funny and a little sad, but such a stupid thing to laugh about. It’s really just one of those cultural peculiarities that you have love, savoring it because you know it’s unique, one of those things that you just end up telling yourself, “I love being Armenian.”

I will not deny however that this does not occur in other cultures as well, I’m sure there are grandmothers out there with their mysterious subculture that nobody can understand. Differences are not always bad, I bet there are some Armenians out there who can totally relate to what I‘m writing about and some might not, Armenian subcultures vary widely and what I am describing are my own experiences that have culminated in a greater appreciation my culture and how it relates to me personally.

So I just ask you to look around at the grandfatherly men playing tavlo(backgammon) in the park, the hairy, heavily mustached men who grill at the kefs and bazaars and the packs of medzmayrigs gossiping with each other and simply,  appreciate it.