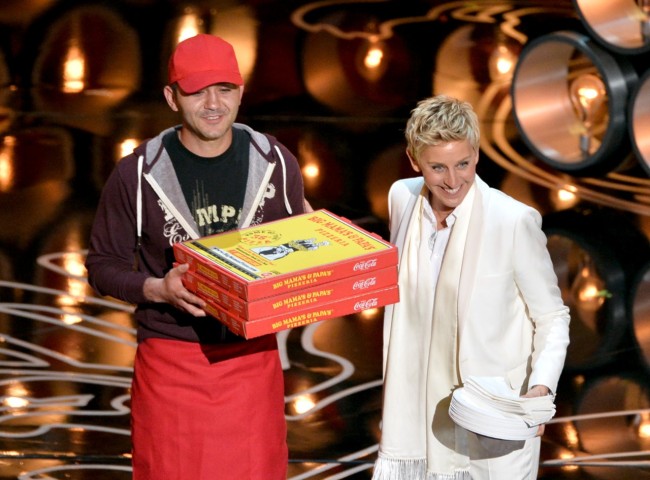 In one of the Oscar’s most talked about moments, the sea of A-list celebrities sitting front row at tonight’s ceremony got a little more than the golden statue they were hoping, as host Ellen DeGeneres treated the likes of Martin Scorsese and Brad Pitt to some good old fashioned pizza, which let’s be honest, is probably what you were stuffing your face with at that exact moment, too.

The pizzas, carried on stage by Edgar Martirosyan (who had no idea he was going to come face to face with Meryl Streep) came from none other than Big Mama’s & Papa’s Pizzeria, an L.A.-based, Armenian-American chain who is now garnering fans left and right. As Ellen walked around, offering pizza  to Leonardo Dicaprio (who politely declined) and a pregnant Kerry Washington (who accepted and noted another pregnant woman nearby needed some too), the Big Mama’s rep kept his cool, delivering his pies like a pro.

At one point, Brad Pitt stepped in to help with paper plate distribution.

Naturally, Armenians on social networks went a bit wild, as Armenians tend to do when one of their tribe gets put in an international spotlight:

People has compiled a list of all the celebs that got a pizza from Ellen and Big Mama’s, including Jamie Foxx’s daughter Corinne who also gave them a shout out on Twitter.

Getting an advertising spot during an Oscar’s broadcast, as you can imagine, costs millions, meaning Big Mama’s walked all the way on stage and away from it with a pretty sweet, priceless deal. The best part? None of it was planned.

The order came through at around 5 o’clock and 20 pizzas were requested for the crew, Wayne Grigorian from Big Mama’s & Pizzas told Ianyanmag.com. “When the driver got there, Ellen invited him to just walk on the stage. Next thing he knew he was in front of all these lights and cameras, and then realized he was on stage and its live. It was quite an unexpected experience.”

Martirosyan is a franchise owner of the Hollywood location, the one closest to where the Oscars were taking place at the Dolby Theatre.

“I guess we were just lucky enough to be there,” Grigorian said, adding that Aghakhanyan had worked hard to establish Big Mama’s through lots of trial and tribulation.

The chain, founded by Agakhanyan in 1991 and his brother who came to Los Angeles from Armenia when he was only 12-years-old has grown considerably to 20 locations across Southern California. Since the age  of 16, Agakhanyan worked at pizza chains  as a cook while he was still going to school in Glendale, Calif. but the road to open his own pizza place was filled with years of challenges, he explained in an interview with celebrity and personality interviewer Gary James.

“I didn’t have a car actually. I rode a bicycle. Eventually, we had a really old oven and the maximum size pizza which I could put in was an 8” pizza. Very narrow. Then 2 years later I bought a Jeep Wrangler. Then I sold it to buy a new hood and oven. Then I went to having no car again. Once I changed the oven and the hood, then I put in a bigger, wider pizza oven. The same pizza oven Domino’s Pizza was using back then. The size of the pizza oven was so wide I could fit 2 28” pizzas right next to each other.”

Check out the cheese-filled fiasco below: