Bethel Bilezikian Charkoudian didn’t know this photo was being taken. She didn’t even know who took it, or the identity of the girl standing near the sign she was holding up. But in April 1965, she decided she needed to be at a march with 50,000 other people led by Dr. Martin Luther King protesting racial discrimination and segregation.

When Charkoudian’s photo appeared on social media over 50 years later, it went viral, inspiring Armenians in America and beyond.

“This made me tear up,” one wrote. “Thanks for bringing this to light,” another said. Then came the comment that solidified how much of an impact it had made: “I’m so proud of this.”

At a time when America feels more divided than ever after a contentious election that also sparked heated debate in Armenian-American circles, hate crimes are on the rise and young black men face the highest rate of U.S. police killings last year, this small act of compassion from decades ago not only resonated with Armenian-Americans, it exposed a kind of intersectionality between communities that often remains unseen, one that is rooted in a universal belief in human rights. Among other communities, Armenians dispersed across the U.S. and world whose ancestors survived gross human rights violations in the Armenian Genocide understand that better than most. 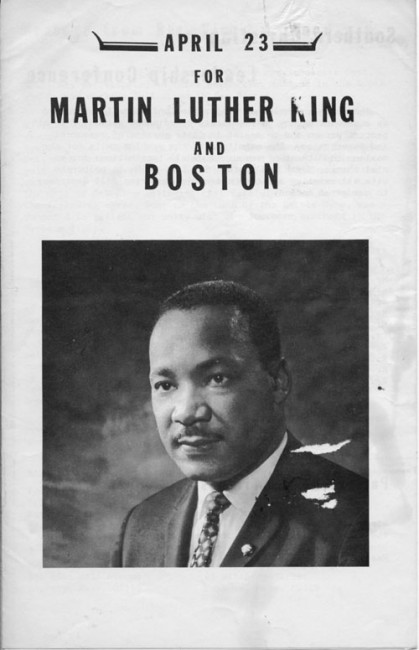 A brochure from King’s visit to Boston./ Northeastern University Library

Charkoudian was a 25-year-old teacher from Newton, Mass. when the photo was taken, inspired by her own background to be a visible, Armenian presence at the rally.

“We fought so hard for our own right to exist, both in historic Armenia as well as in the United states, as well as historically,” she told me on the phone when I called her, eager to learn more about the story behind the image. “We fought hard.”

This self-proclaimed “Marash Girl” who writes in a blog by the very same name (which is where the photo originally appeared), grew up as the only Armenian child in her class at school, living with her extended family, including her parents, grandparents, aunts, uncles and cousins, where it was common to hear both Turkish and Armenian being spoken.

Her father was a storyteller she says, and often entertained with tales of family resilience and survival back in Marash. However, she stresses, the stories never revolved around the topic of hate.

“It was always about the Turks next door who helped them, the Turks who warned them when soldiers were coming,” she says. “It was not a family of hate, it was a family of love. We never learned to hate the Turks – we knew what had happened, but we didn’t learn hate.”

Charkoudian grew up in the Armenian Protestant Evangelical Church and always felt like an outsider, even in the Armenian community. Being different was something she was comfortable with, and the ease with which she embraced her status was something that helped her relate to people who were also classified as “other” in America.

Once, when she was 21, she went into a wine store with a friend who was of Navajo descent. They walked in together to buy a gift for a friend’s birthday party. “I don’t sell fire water to redskins,” she remembers the clerk telling her friend.

It was experiences like these that led her to becoming sensitive about racism and social inequality. By the time Martin Luther King was slated to come to Boston, she was already very interested in the civil rights effort, putting up signs and posters of support in her bedroom.

She had originally wanted to go on the bus rides and sit ins, but her father wouldn’t give her permission.

So the next best thing was to go to the Boston rally. She hadn’t planned on making a sign, but there were people passing out placards and markers, so she took a placard and a marker and wrote her slogan:

“Armenians for Freedom for All.”

She marched with thousands of others, towards city hall. A brochure saved from the event details that the march was to protest issues like segregation in public housing and education. “In short, we march to protest the lie that a New Boston can be built without social justice.”
When King, whose alma mater was Boston University, landed at Logan Airport, he addressed a joint session of the Massachusetts General Court, where he spoke about the fact that segregation must die if democracy is to live, according to the New England Historical Society.

At one point, a girl came up to her – the girl on the left of the photo – and told her she was half-Armenian. “Can I stand next to you?” she said.

She remembers a few Armenians standing on the sidelines, heckling and making fun of her for participating, but she didn’t let them deter her. 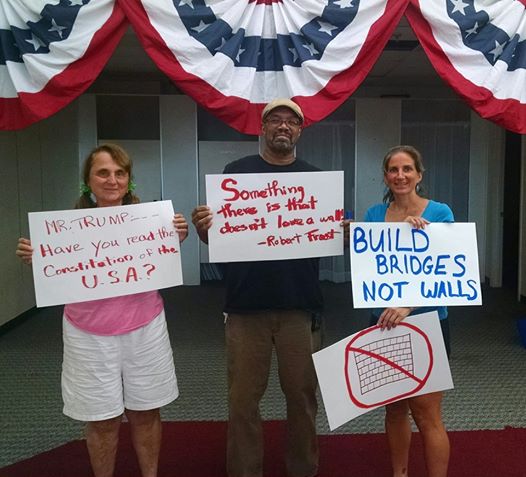 It was just 50 years earlier, in the aftermath of the genocide when thousands of survivors had landed in America to try and rebuild their lives.

When Charkoudian, who now runs “Bethel Charkoudian Books,” a book appraisal and consulting company, found out that her photo from half a century ago had been shared so many times online, she immediately thought – what is it that I’ve done today?

That is, a life without fear when it comes to standing up or reaching out to those who are in need, whether it was over 50 years ago, or today.

Op-Ed: In the Age of Trump, Staying Silent About Global Armenian Community isn't an Option