Although commercial property insurance broker Anush Movsesian Avejic’s day begins at an early 5:30 a.m, it doesn’t stop her from coming home every evening after a long day of work and designing jewelry in the shape of colorful bracelets with eye motifs and pomegranate necklaces with red Czech crystals as seeds. With an Esty store “Pomegranate & Eye,” the Ebay of all things handmade, and recent news of a few designs of her bracelets being carried at Burbank’s Bliss Unlimited, this Los Angeles insurance broker also doubles as a jewelry designer, whose sales mostly are to non-Armenians intrigued by the colorful juxtaposition of beads and other fine materials that carry stories and traditions behind their aesthetic appeal.

Born in Los Angeles, Avejic’s grandparents were survivors of the Armenian Genocide and her parents settled in the L.A. area in the 30s.  Avejic credits her father with sparking her interest in jewelry, who she ventured off to downtown L.A with to shop the bead stores whenever her mother needed a necklace to wear with an outfit.

“I’d love going with him, checking out all colors, shapes and styles of beads. We’d bring home beads, and he’d string them and make Mom some cool creations.”

However, her greatest inspirations come from her grandmothers who raised her and her family to be proud Armenians and Americans as well, she said.

“I grew up hearing about the genocide and the struggles they had gone through. Throughout my life, when the going has gotten tough, I have always remembered my grandmothers and the strong women they were.”

She also looks to Vivaldi, old needlework and nature as some of her other inspirations.

Growing up in Los Angeles, Avejic experienced a very different Armenian community than the bustling one we know of today.

“I grew up in an L.A. that was pretty devoid of Armenians. The small group of us that were here were very proud of our heritage. My parents were very committed to making sure my two brothers, sister and I were immersed in our culture.”

With her Armenian heritage woven through her creations, Avejic’s designs are simple, delicate and evoke a sense of history. Her fascination with eye beads began when her mother, then a Saturday Armenian school teacher at St. James Church in Inglewood, Calif. would tell her about some people felt the beads offered protection from jealousy and things of that nature.

“In the 70s, there weren’t too many Armenians around. And there were no Armenian groceries either. On the way home, we’d often stop at the Greek grocery on Pico blvd. to buy our olives, bread and cheese. And that’s where I first saw the eye beads,” she said.  “When you’re a kid, and you see all these eyes, and your mom says, ‘char atchkeh g’baheh’ (it protects you from evil eye, which is the belief that people’s envy towards your good fortune may result in your misfortune) you get a little freaked out, and a lot fascinated. That’s when I first started noticing all the little eye beads pinned on babies and the eye beads hung in thresholds of homes.”

Avejic has set up a mobile system for her jewelry making, with a cart that she takes with her around the house so she can work and be with her family, although she does admit that the beads have taken over and are everywhere. In addition to creating the jewelery, Avejic designed the beads herself when she  found that most beads on the market weren’t exactly what she was looking for. 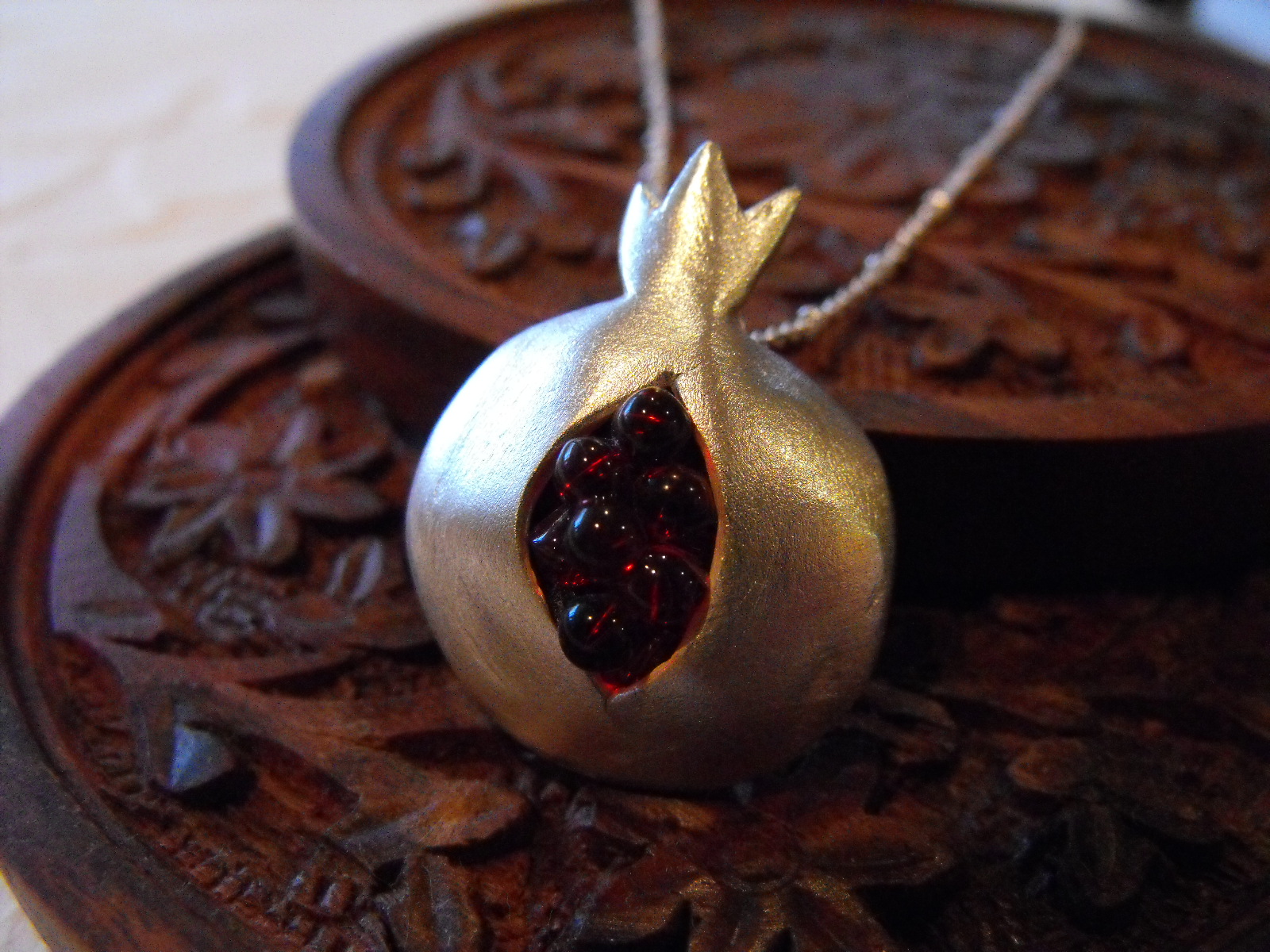 Her pomegranate necklaces, in satin and shiny finishes, symbolizing fertility and abundance are one of a kind. Each one is made by hand and therefore uniquely different.

What I’m trying to achieve with my pomegranates is a return to the old ways and a desire to bring back old-style craftsmanship. A move away from machine-made. I put a lot of love in each of my pomegranates. I roll, cut, assemble, sand, fire, burnish, and polish each one. And I sign each as well.

It seems like the effort has paid off, as she recently received an order from an English professor who is volunteering to teach in Siberia for a month and wanted to take gifts to her 65 students.

“She asked if we could work out a simple eye bead necklace design, which we did,” Avejic said.
“This kind lady is not Armenian but she is enchanted with the eye beads and wanted to share a
‘meaningful gift’ with her new students.” 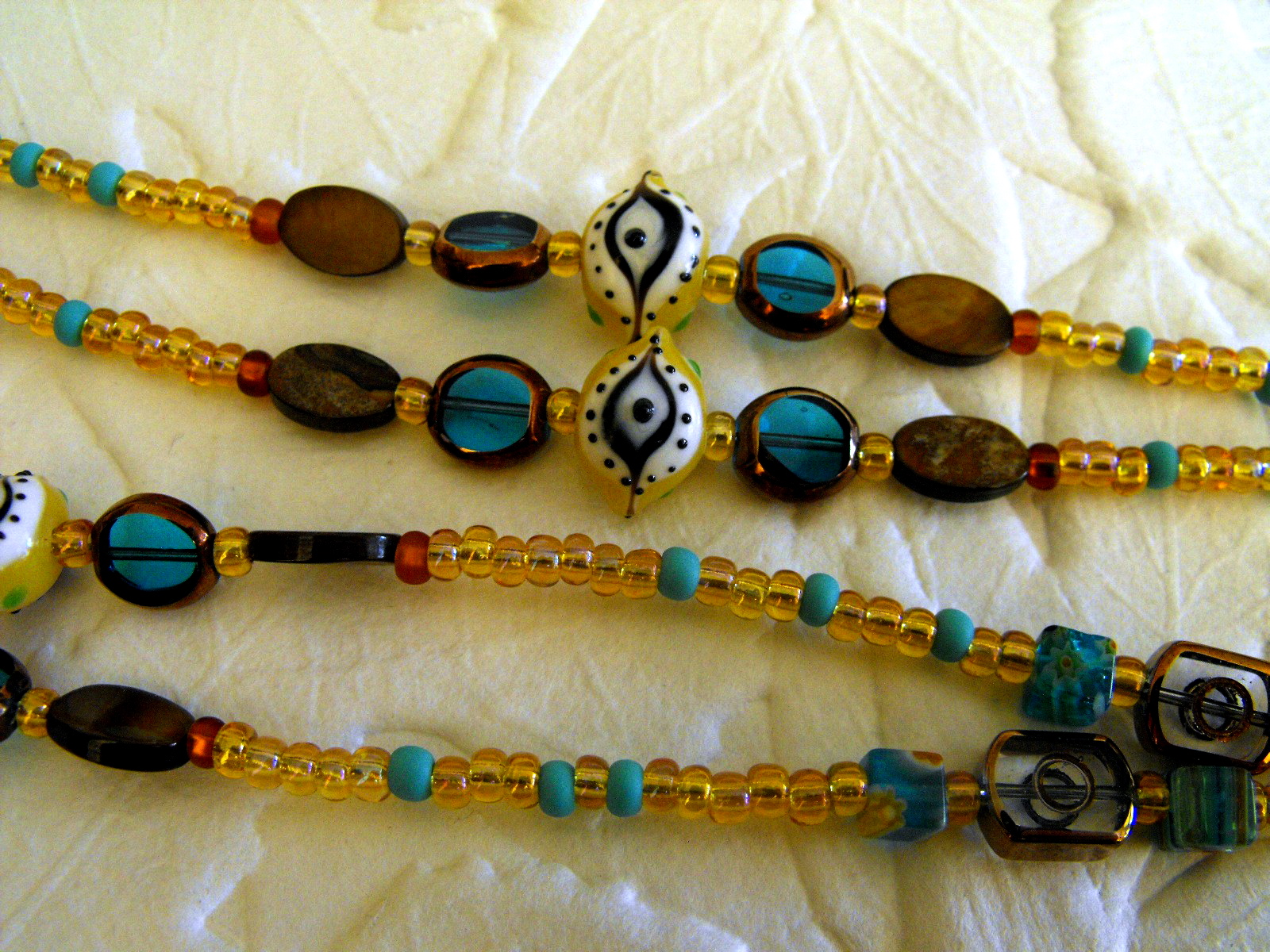 In addition to a full time job and her budding jewelry designing career, Avejic is passionate about working toward ending the current genocide in Darfur, because it’s our responsibility to reach out to those who are where we were 94 years ago, she said. Active in the organization “In His Shoes,” which she works with to raise funds and awareness for world hunger and the genocide in Darfur. She also participates in a monthly homeless outreach program where she is part of a group that feeds and clothes those on the streets of Skid Row in downtown L.A.

“I saw a t-shirt at a Darfur rally in March worn by a Darfuri,” she said. It said, ‘Instead of mourning a genocide, work to stop one.’ “I’m trying!”  ∞