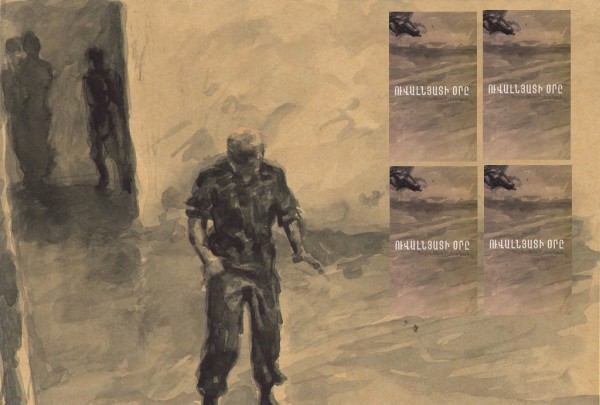 artwork from Hovhannes Ishkhanyan's Day of Discharge, which is under threat from censorship in Armenia

As Armenia prepares to celebrate its status as World Book Capital of 2012, officials in the South Caucasus country are in the middle of censoring and pressing charges against the work of a young Armenian author  whose book was deemed defamatory to the Armenian Army.

Hovhannes Ishkanyan’s fictional book of short stories, “The Day of Discharge,” was pulled from the shelves of a few bookstores in the capital of Yerevan, including from one that initially celebrated its release, following pressure from Military Police who initially called him in for questioning on Feb.27. Authorities told him that the book needed to be corrected, he said.

“I asked what would need to be corrected if this is a work of art; they told me when you come we’ll explain it to you,” Ishkhanyan said in an online interview with ianyanmag. “I went and explained that the theme of the book has nothing to do with reality, that the characters are made up.”

When they began to question him about the style of language he had chosen to write it in, he knew they were preparing charges against him, he said.

Ishkhanyan could be charged with Article 263 of the Criminal Code of Armenia (the illegal dissemination of pornographic materials or items).

Ishkhanyan, a 24-year-old engineer who wrote the stories last year, says that his book has caused a fury among officials because its context is unlike those found in other literature that might deal with the same subject matter.

“This new difference throws people into shock, and for things that are written in that style concerning the military, it becomes reason for punishment,” he said. “They read the book and take it personally, take it on themselves and want vengeance, in the book they discover an army which isn’t to their liking.”

The Armenian army has been suffering from a spell of bad PR in the last few years as news of non-combat deaths have plagued the institution. Activists, who regularly protest the deaths, accuse the military of  failing to properly investigate them as well as portraying murders as suicides.  In September 2010, an amateur video that was posted on YouTube alleging abuse in the Armenian army made headlines in and outside the country.

Of the 16 fictional stories in the “The Day of Discharge” three concern themes related to the army. One of those, titled “Military March,” about 100 marching soldiers, who, dragging their military identification cards, begin to relay their experiences of their life in the army,  has angered authorities the most, according to Ishkhanyan.

“With this, I wanted to put the emphasis on each individual soldier,” he said. “That no matter how much of a soldier one is, every one has their own individual stories. A soldier isn’t just defined by a service record.”

In addition to defaming the army, Military Police attorney Anahit Yesayan told  Yerevan-based ArmeniaNow.com that Ishkhanyan’s book is offensive to religion and Armenian mothers, both of which he refutes.

“Literature is wholly an environment where reality can be distorted – should we blame Kafka for turning Gregor Samsa into a cockroach, or Goethe for Faust? Perhaps we should ban Armenian and Greek mythology or turn “David of Sasun” into non-fiction, or blame Samvel Mkrtchyan for translating “Ulysses?”

As for his own experiences during his 2-year mandatory service, Ishkhanyan says they were pleasant.

“When I look back at those years, I only have good memories,” he said. “Even the unpleasant incidents that I’ve had, I remember them with a smile. The next best thing to friendships that I gained from being in the army is the perspective into absurdity, nothing surprises me now, even this saga is not surprising to me, it’s unpleasant yes, but I’m not surprised.”

The censorship and charges against Ishkanyan and his book have riled both writers in Armenia and its far reaching diaspora, with some seeing it as a reversion to its Soviet past.

“Unbelievable. What ages are we living in?!” wrote Unzipped. “Say your firm NO to attempts of taking back Armenia into dark ages of Stalinism.”

“In a democracy the Military Police, the Ministry of Culture or any branch of the bureaucracy is in no position to tell a writer what to write and how to write it,” he told ianyanmag. “Anyone who says otherwise belongs to the irrevocable past. I have always maintained that where commissars of culture enter, culture exits.”

In an effort to spread awareness, Armenian-American author Nancy Agabian has prepared and circulated a Facebook event page with a link to the petition asking that any prosecution against Ishkhanyan be dropped.

“As writers, artists, intellectuals, and concerned members of the Armenian diaspora (and beyond), we add our names to this petition to express our outrage over the censorship of Hovhannes Ishkhanyan’s novel Demob Day by the Military Police in Armenia and by various bookstores in Yerevan,” the statement said. “Freedom of expression is the bedrock of any democracy; the interrogation of an author and the removal of literature from bookshelves harkens back to the primitive, brutal, unenlightened, and fearful days of Stalinism and Fascism.”

The petition currently has 239 signatures in support of Ishkhanyan and warns that this type of censorship will set  “a precedent in World Book Capital Yerevan to censure the publishing houses and book stores were worldwide famous books are sold which are not appropriate to the taste of some Armenian officials.”

Though censorship in Armenia fares well when compared to post-Soviet Belarus or neighboring Iran, the country has drawn international criticism from the likes of the Committee to Protect Journalists for “maintaining a tight grip on the country’s broadcast media”  including independent TV station A1+, which has been off the air for a decade and continuously refused a broadcast license.

A 2009 report on the “Freedom of Expression and Censorship in Armenia” by the Eurasia Partnership Foundation found that where traditional and political characters are concerned, freedom of expression is regulated in art and literature as a means to preserve ‘the Armenian’ character, considered the “guarantee of the survival of the nation” and whose “deviation is regarded as the basis for the destruction of the nation.”

The View from Zabel Yesayan’s The Gardens of Silihdar, Part II