Emily Haas, Paige Prince and Henni Alpermann all met as volunteers in Armenia’s Vayots Dzor Marz. After spending much time with women in the region as part of their ‘extended’ families, they took it upon themselves to photograph them for their Women in Armenia project.  The exhibit made its first showing at the Yeghegnadzor Social Service Center, then moved to the Vayk Social Service, Gyumri and even made its way to the U.S. and British Embassies in Yerevan.

“We were all so amazed by the women in Armenia, how hard they worked to support their families, keep up a household and in the face of such tough times,” said Emily  Haas, a Peace Corps volunteer based in Yeghegnadzor from 2009 to 2011.

“Many of the women came to the opening show in Yeghegnadzor and were so emotional when they saw and read how we viewed them, as they had never thought of themselves as so important,” said Haas. “The biggest reward to us was to see how special these women felt on that day.”

Below are some of the photographs and stories from the lives of women in Armenia taken and written by Haas, Prince and Alpermann.

When you follow the street up from the river in Getap village, at some point you will reach the house of the Khorenyan’s just underneath a huge rock. From afar you can hear the turkeys, which are running around in the backyard and perhaps the cry of their youngest grandchild. Laundry is blowing in the wind and smoke is coming out of the woodstove. If you enter the house during the day, you will not meet any men in the house. The head of the household died seven years ago and the son is working. All men of this family drive trucks all over Armenia. The father was a driver, as is the son, and if you ask them what the youngest will do later, they’ll tell you that he is going to do the same job.

We met Aghavne in the mashrutka to Getap. She invited us to come to their house. When we entered, it was nice and warm. The great-grandmother and the eldest grandchild were lying in the bed and the others were immediately preparing coffee, apples, nuts and cookies for us. Armenuhi tells us that they are six people living in the house; her mother-in-law Aghavne, her youngest daughter Aghavne, her son and her daughter-in-law Marine, along with their two children and herself. She has another daughter who is already married and lives with her husband’s family. Although all the women are unemployed, they are busy taking care of the children, the house and the garden.

Anahit Hachnasaryan is student and mother. She studies English in the third course of “Gitelik” University. While she is studying, her mother or her mother-in-law are taking care of her 9-month-old son Artyom. When you see Anahit for the first time, you would not think that she has a baby. She is small, very thin and very young, but she is more quiet and mature than the other girls in her class. Anahit is originally from Yeghegnadzor. Now she is living with her parents-in-law and her husband in the village Malishka. She moves between the two houses to organize day care for her son.
She got to know her husband when she was 18. After both his and her parents agreed, they decided to get married. 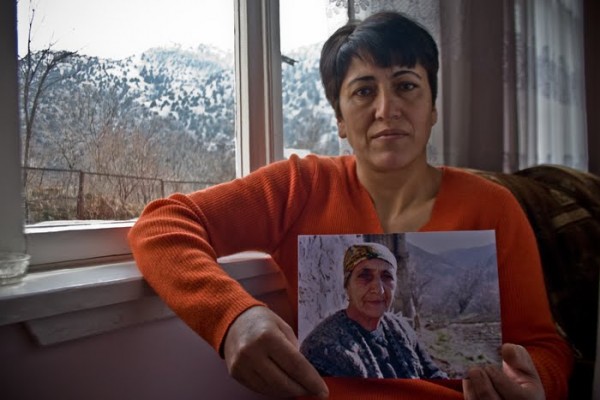 Nazik Harutsunyan is a friendly neighbor to everyone living on Komissarneri Street in Vayk, and spends her days working in her garden, taking care of her home and her 14-year-old daughter Narine. She is always laughing and joking and her sense of personal happiness is easy to see. She was born in the village of Bartsruni to a large and loving family. She came to Vayk to live in the house that her uncle built about 15 years ago. She is a single mother, and does a fantastic job raising her daughter alone. When her mother became ill, Nazik cared for her all day, everyday for the last 10 months of her life up to moment she died. She remembers her mother’s life and carries on her mother’s way and traditions with respect and love. She works very hard to keep up all the work that it takes to run a house alone: cooking, cleaning, chopping wood, repairing broken machines and electrical outlets, harvesting and planting the garden, and teaching her daughter about what is important in life. She is a very exceptional woman and is recognized for her happy spirit and her lifestyle that is full of honor and dignity.

“When you enter the yard of Sona Vanyan, you can smell her profession: lavash, cheese, baklava and many other things appreciated by the whole village. Sona works from sunrise till sunset. She bakes, cooks, milks the cows, cleans house and yard, she does everything. She has had a hard life, but she is strong, smiles and says,

“We don’t live very well, we are not rich, but we thank God for everything we have every day.” 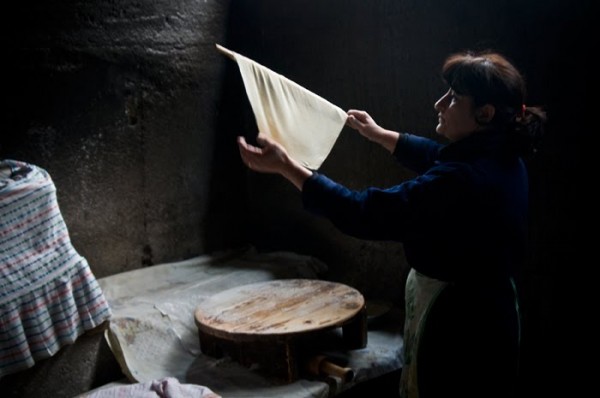 She was 21 when she married, together the couple had a one-year-old son and she was two months pregnant with her daughter. After only one year of marriage her husband died. All alone at 22, she had just moved from Yeghegnadzor into her husband’s house in the village Getap. Since then she lives with her parents-in-law and raises her children alone.

Now she is 40. Her son who is now 19, is serving in the army in Sisian. She shows his picture with pride. Her daughter studies in Getap school and helps her bake lavash when she comes home from school. People from the village bring her flour and she bakes for them the delicious bread. That’s how she earns money. 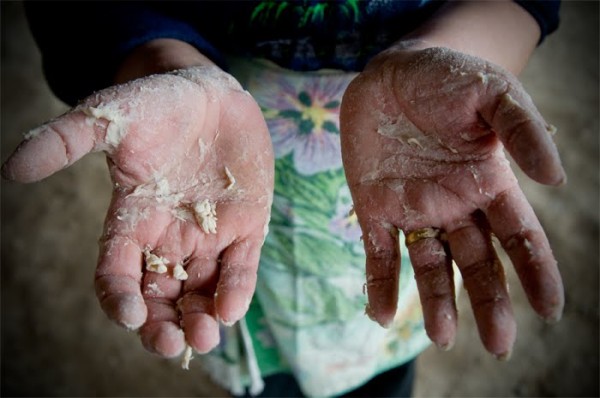 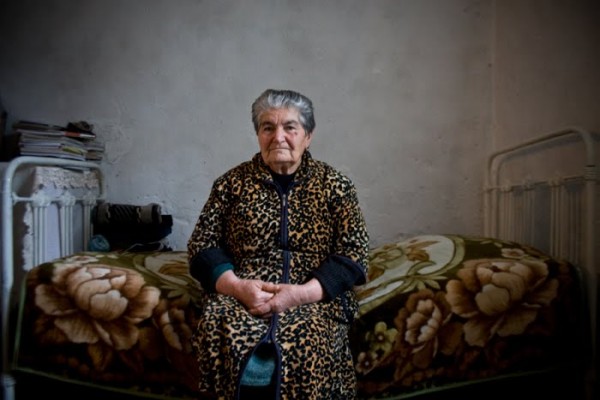 Emma is Sona Vanyan’s mother-in-law. When she tells us about her son’s death at the age of 30, she has still tears in her eyes, 18 years later. She cannot see very well, she says,

“The world is cloudy to me.”

With patience is she sitting on her bed and waiting until we have the right picture. She smiles and tells us openly about their life. She is originally from Getap village, married a man from the same village and has stayed there her whole life. Everybody in the village knows her and appreciates her open-minded, friendly character. 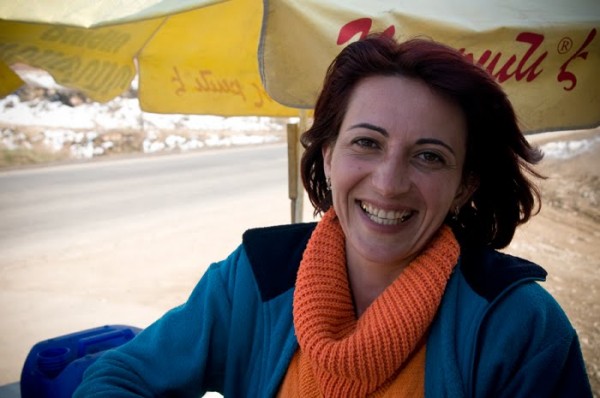 Nunufar is specialist in selling wine. Coming from Yerevan you can see the yellow parasol, the sign that says ice cream and her conspicuous red hair as one of the first points of sale on the right. Cars honk, people wave out of their window; Nunufar is known all over the road Yerevan- Yeghegnadzor. If you were wondering if ever cars stop on the road to buy something at Nunufar’s place, they definitely do. Maybe it is an ensemble of her tasty wine and her prepossessing character. Her cheerful laugh and her hospitality are remarkable. She serves her customers big glasses of wine, coffee, cookies and apples. Nunufar was selling wine in several markets in the area for 13 years before her family opened the place on the road.

She works from 9 p.m. to 9 a.m. every day and never takes a vacation. In her small selling house she has a stove to cook and a radio. She says that she could never leave her village, even though she is very interested in other cultures and languages. Maybe if she wouldn’t have this point of sale, maybe. Nunufar speaks not only Armenian, she also remembers German and Russian that she learned in school. She learned Persian on her own and knows Turkish from the trips she went on with her father to Nakhchivan, which was easily accessible from the village Areni.
Nunufar is the oldest child in her family. Her brother died and her sister is married in Karabakh. She is not married and stays with her parents. She never had the chance to study after school, but she studies herself languages and reads a lot about environmental issues. 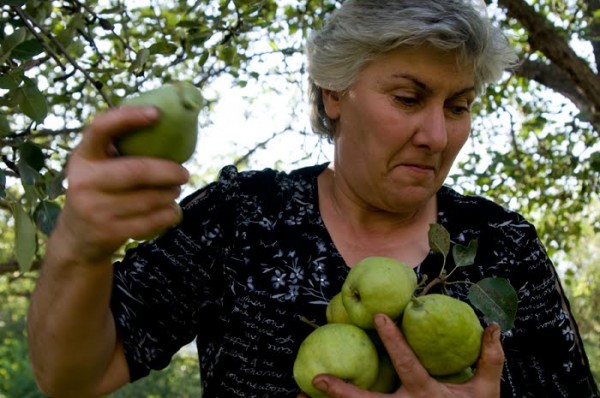 Mother of many and master of most, Ruzan Khatchatryan doesn’t spend much time sitting idle. The mother of two girls and one boy is also surrogate mother to seven Peace Corps Volunteers, one of whom is currently serving in Yeghegndadzor (Emily Haas), while the others have safely returned to America and call their Armenian mother occasionally. While she may recall with fondness the times she had spent with the Americans living with her in the past, it also brings back memories of what her house was like when it was full. Ruzan’s husband died just one year ago, her son is serving in the army in Sisian, her oldest daughter is married and lives in Russia and the other is married with two young children and rarely gets an opportunity to visit.

Ruzan works 12 hours a day, seven days a week in a khanut (store) preparing kebabs, selling various sundries and most recently gold jewelry. Work, she said, is something that still keeps her going. While her children were studying in university, all of her children graduated with college degrees from universities in Yerevan, Ruzan kept a cow, her garden and the household. She worked from sunrise until sunset everyday and gave every thing she earned to her children so they could pay their tuition and afford to live in Yerevan. She is tremendously proud of what her children have accomplished and says that she has always held the future of her children as her highest priority.

Henni Alpermann goes to university in Leipzig, Germany.  She was a Weltwaerts Volunteer in Yeghegnadzor in 2009 to 2010. She has worked with a few NGOs that work with Armenian refugees in Germany.

Paige Prince is a part time student living in Austin, Texas. She worked at the grade school in Vayk as a Peace Corps volunteer from 2008 to 2010  and is now studying to be a nurse.

Emily  Haas lives and works in Portland, Oregon. She created a media center in Yeghegnadzor, where she was a Peace Corps volunteer along with her Armenian counterpart, and now works at a bakery in Portland.

These photos and stories originally appeared on Emily Haas’ Armenian Experience and were used with permission as part of a series written in honor of International Women’s Day. You can find the complete exhibit here. All photos © Emily Haas, Paige Prince and  Henni Alpermann and should not be used without permission.

A Look Back at Soviet-Era International Women's Day Posters