By Contributor February 22, 2011 in Diaspora

Genocide Recognition: There’s an App For That 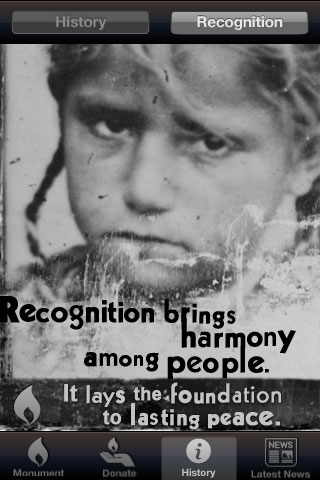 Motion graphics animator Alex Nisanian had already spent $800 of his own money on developing on app dedicated to recognition of the 1915 Armenian Genocide as well as vigilance for current human rights violations like the genocide in Darfur. But when he got laid off and freelance work slowed down, he had to put the project aside for almost a year. Now, thanks to the crowd-funding website Kickstarter, Nisanian has resumed his project once again and collected $1720 from 32 backers who have donated anywhere from $5 to $100 to see the project come to life.  With four days and $1780 to go to reach his goal of $3500 to develop ‘Armenian Monument,” he’s confident the app will be available for download by April 24, the annual day of commemoration of the Armenian Genocide in diaspora communities all over the world, and in Armenia.

“The most important part about this app is to encourage activism on a wider and younger scale,” Nisanian said in an email to ianyanmag. By designing sections like “Call to Action” like a video game, where you can unlock badges like “Community Organizer” and “Concerned Citizen,” he hopes to use social media to spread interest in the issue. “Users can advertise their activism on Facebook/Twitter and spread the call to others at the same time,” he said. “There will also be an online leader board of the most active citizens on the Armenian Monument blog.”

The app also includes a history section, detailing the events of the Armenian Genocide as well as a web link that easily lists contact information for the members of the U.S. House of Representatives. An updated “News” section also acts as an RSS feed for users, highlighting the latest in news concerning the topic of genocide.

Nisanian who already has developed two other apps, including  “Ultimate 2012,” an animated countdown of the Mayan calendar, says that if “Armenian Monument”app which will be available for free, does well on the iPhone, he’ll be looking into developing it for platforms like the Google Android and Blackberry next.