By Contributor December 1, 2008 in Culture Vulture

If you’re looking to get something special for the ones you love this holiday season, you might want to consider a unique gift like the Nabaztag. Yes, you read that correctly. The Nabaztag, “rabbit” in Armenian is a Wi-Fi enabled device that although looks like a rabbit, has abilities far beyond eating carrots and procreating at a rapid pace. Created by Rafi Haladjian and Olivier Méevel, the Nabaztag can send and receive music and messages as well as tell you what the weather looks like, give you an update on your stocks and news around the world, function as an alarm clock and send you e-mail alerts. It’s also multi-lingual and has the ability to communicate in English, French, German, Italian and Spanish.

When you take your Nabaztag home, you plug him in and wait for him to connect to your Wi-Fi. From there, you can go online to the official Nabaztag website and register him by giving him a name and also choosing what abilities you’d like him to have and let the fun begin. He works on Windows, Macintosh and Linux operating systems, even when your computer is turned off. If you’re a developer, you can even create your own applications to use

Although the original Nabaztag sells for $99, the newer version, which obeys spoken commands through voice recognition, detects and reacts to an object’s presence using an RFID reader and plays podcasts and streams internet radio is $199. 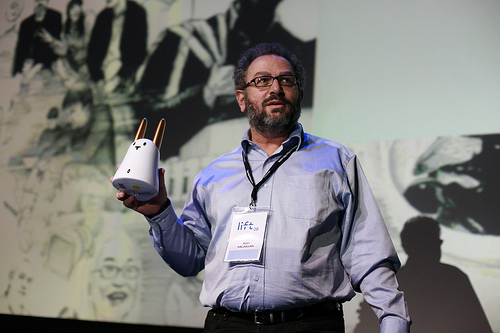 Rafi Haldjian at the 2008 Lift Conference in Geneva, Switzerland with the Nabaztag. Photo by Robert Scoble

In short, it’s a pretty amazing and fun object to have and that’s probably what Haladjian had in mind when he came up with the concept. A French-Armenian business, Haladjian moved to France in the late 70s and founded FranceNet, the first internet service provider in France. In 2001, FranceNet, which was changed to Fluxus, was sold to British Telecom and it was shortly after this that he co-founded Violet, the company that manufactured Nabaztag.

The Nabaztag even has its own opera, fondly named the Nabaz’mob. You can watch the mob in action below.

HIV Cases on the Rise in Armenia