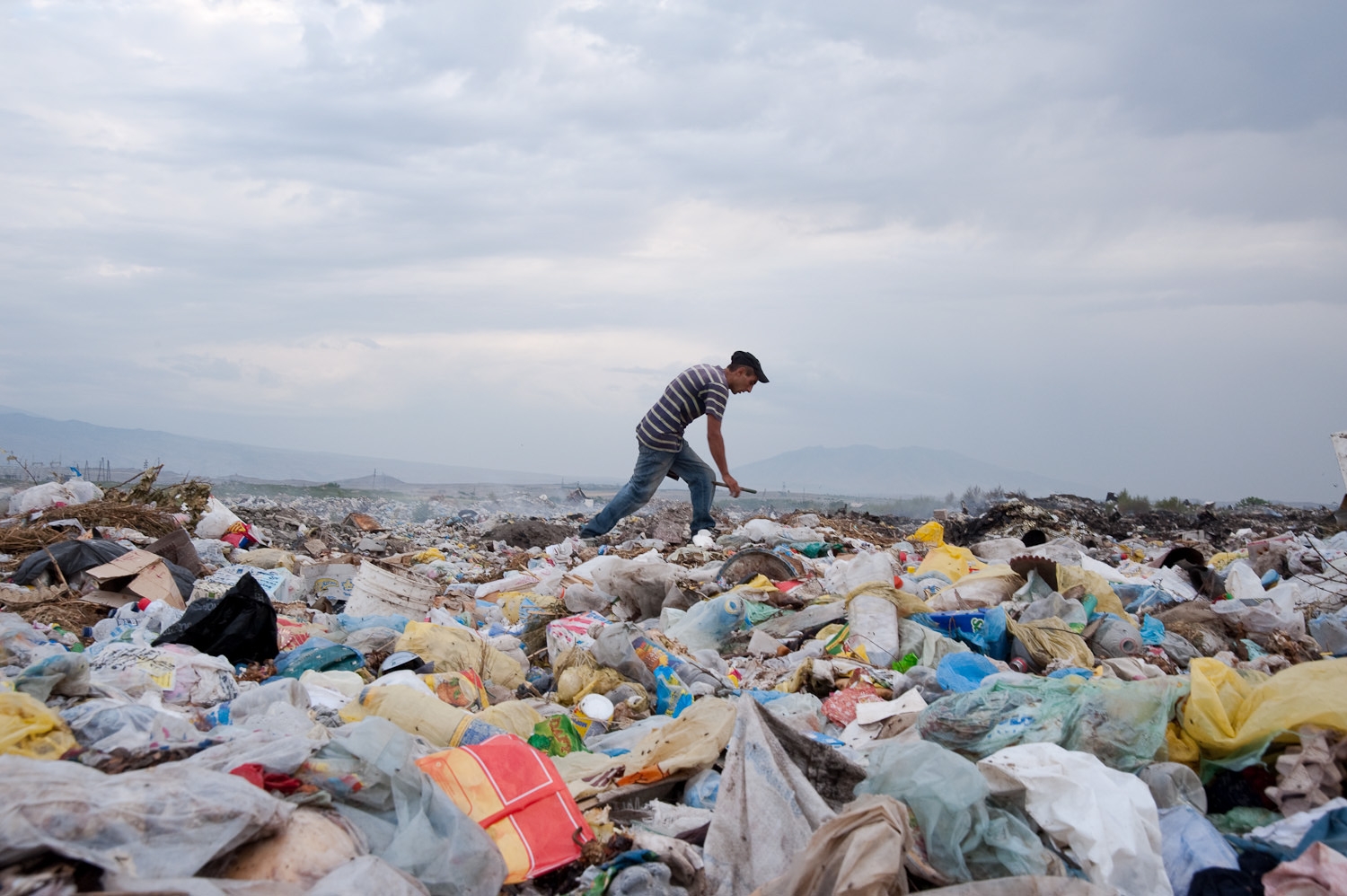 Grigor, a 29-year-old husband and father who lives on the outskirts of Etchmiadzin in Armenia gets up for work at 6 a.m and doesn’t leave until 5. Unlike most of the typical workforce however, Grigor’s day is spent rummaging through a garbage dump, where he searches for odds and ends like plastic to sell and shoes to burn for fuel. When he’s able to sell what he finds, his family has food on the table.
Unfortunately, Grigor’s dire situation is not too uncommon – after reducing poverty rates by half in the last decade, Armenia has seen a sharp rise again, according to the World Bank.

Armed with a camera and the support of the Tufenkian Foundation, photographer Sara Anjargolian set out to document and raise awareness of the rising poverty level, the results of which have been culminated into an exhibition and book.

“How We Live: An exhibit and book documenting life on the margins in Armenia,” will debut in Los Angeles on Saturday, March 27 with over 40 large prints suspended by wires, along with multimedia projection screens that will aim to unite the viewer and the subject in the same space, in an effort to blur the lines between “us” and “them.”

“Photography in Armenia is in some ways more familiar to me than living in L.A., it’s kind of like my own backyard,” Anjargolian said.

Anjargolian, who is also an attorney and served as a trial lawyer in the Justice Department in Washington D.C.,  went to Armenian on a 10-month Fulbright scholarship but ended up staying for two and a half years between 2002 and 2004.

Although she had seen poverty first hand in Armenia before, the time she spent photographing families for the exhibition had a profound effect on her. Her objective was to represent each story as truthfully as she could, without making her subjects feel objectified or taken advantage of, she said.

“A lot of the details that these families shared with me are things that they’re not proud of – and things that their natural tendency would be to hide,” she said. “Just gaining their trust and making it more of a collaboration than someone just showing up shooting film and leaving, that was kind of the biggest challenge for me.” 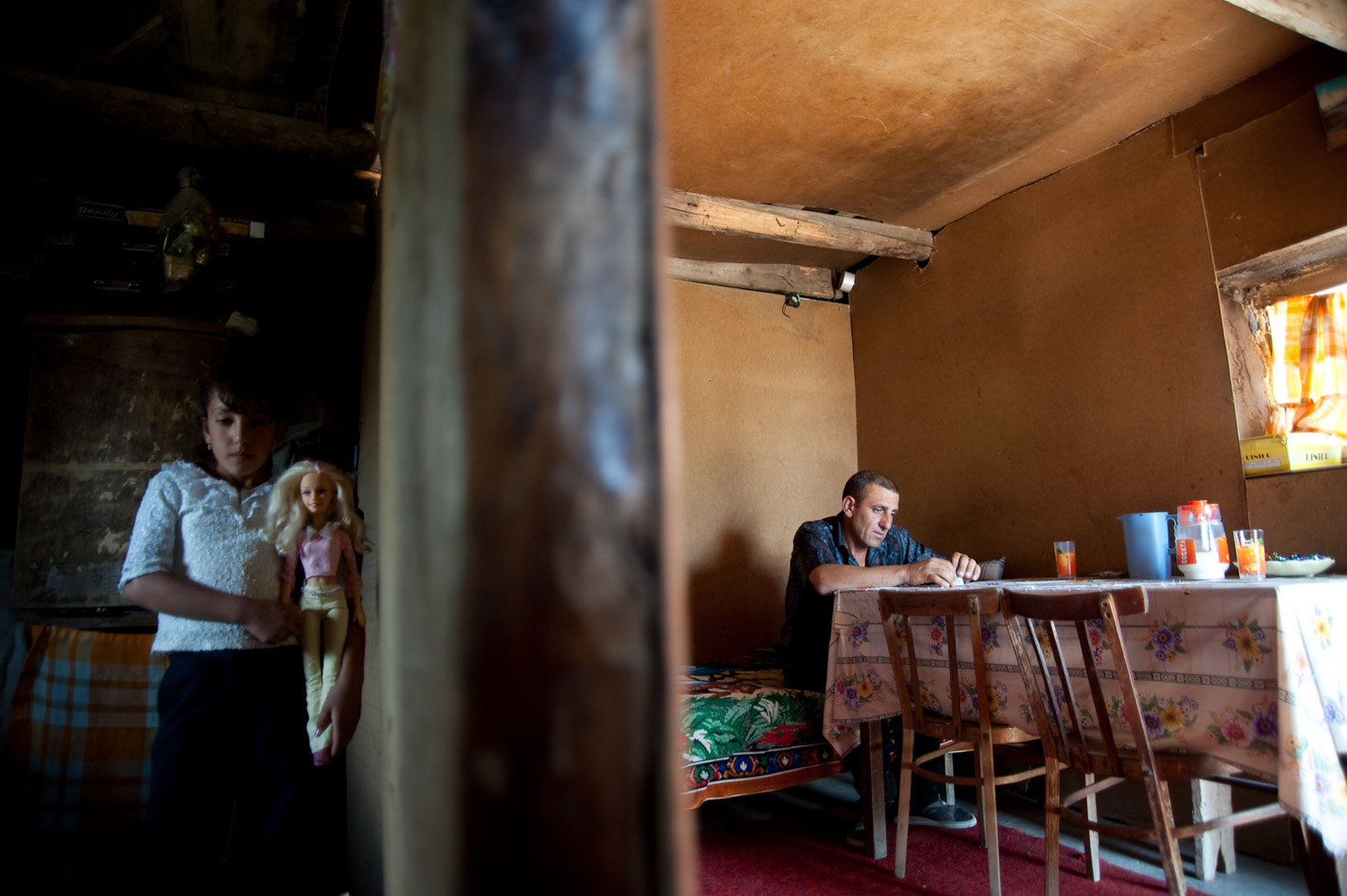 Ani, 12, with her favorite doll, and her father Senik Garabedian. Senik, his wife Garineh, and their four children, live in this two-room tin and wood shack. The lack of heating in their shack during the winter, when temperatures dip below freezing, caused Ani to contract a serious respiratory illness. She began coughing up blood and the illness soon spread to her heart. Her parents tried to find a doctor who would perform the surgery Ani needed, but were turned away repeatedly because they could not pay for the surgery. At one hospital, Ani was put under anesthesia in preparation for surgery, but when the doctor found out that the family could not pay, she was sent home in a semi-conscious state. A non-profit organization intervened and arranged for Ani’s surgery. She is doing much better now. Geghard village, Armenia, 2009./ © Sara Anjargolian

However, the fact that she was accustomed to Armenia and quite the opposite – that she was essentially from the outside and not from their own backyard made her subjects feel comfortable.

“I tried to show them as much respect as I could, I didn’t push,” Anjargolian said.

She called watching Grikor, the young man who supports his entire family by selling items he finds at the garbage dump, an intense experience.

“It was very difficult to see somebody who was a young able bodied, smart young man to do that every day,” she said. “What was even more striking was that he had made peace with it. I was almost paralyzed a little bit of the gravity and heaviness of the situation. It left a lasting impression on me.”

Although Armenia had been making significant strides towards the reduction of poverty, having had the poverty percentage drop from over 55 percent in the late 90s to 25 percent in 2008, global demand, international prices for key exports and an unprecedented drop in remittances from Armenians overseas have recently deeply affected the country, according to a report published by the World Bank’s International Development Association.

“A lot of these families had family working abroad sending money  and their main source of income from abroad ended,” Anjargolian said.

While many Diaspora Armenians travel to Armenia, the images in Anjargolian’s photography isn’t something that’s usually seen.

“I think Diaspora Armenians who travel to there don’t see this side of Armenia,” she said. “They go as a tourist, they see all the beautiful churches and Yerevan – all of that is really great, but I think the lifestyle that I’ve photographed is very much on the margins of Armenia.”

Anjargolian contends that the the fringes of Armenian society deserve as much attention as anything else.

“I think it’s really important for the diaspora to know about this. First it’s awareness, but I’m hoping that besides the awareness, there’s dialogue about the situation  and a questioning of “how is this possible?”

“I just want to move people to know what’s going on in our country and hopefully move them to act on it.”

The exhibit also contains a lot of photographs of single Armenian mothers – one of the most haunted stories coming from a 40-year-old woman named Narineh Simonian. 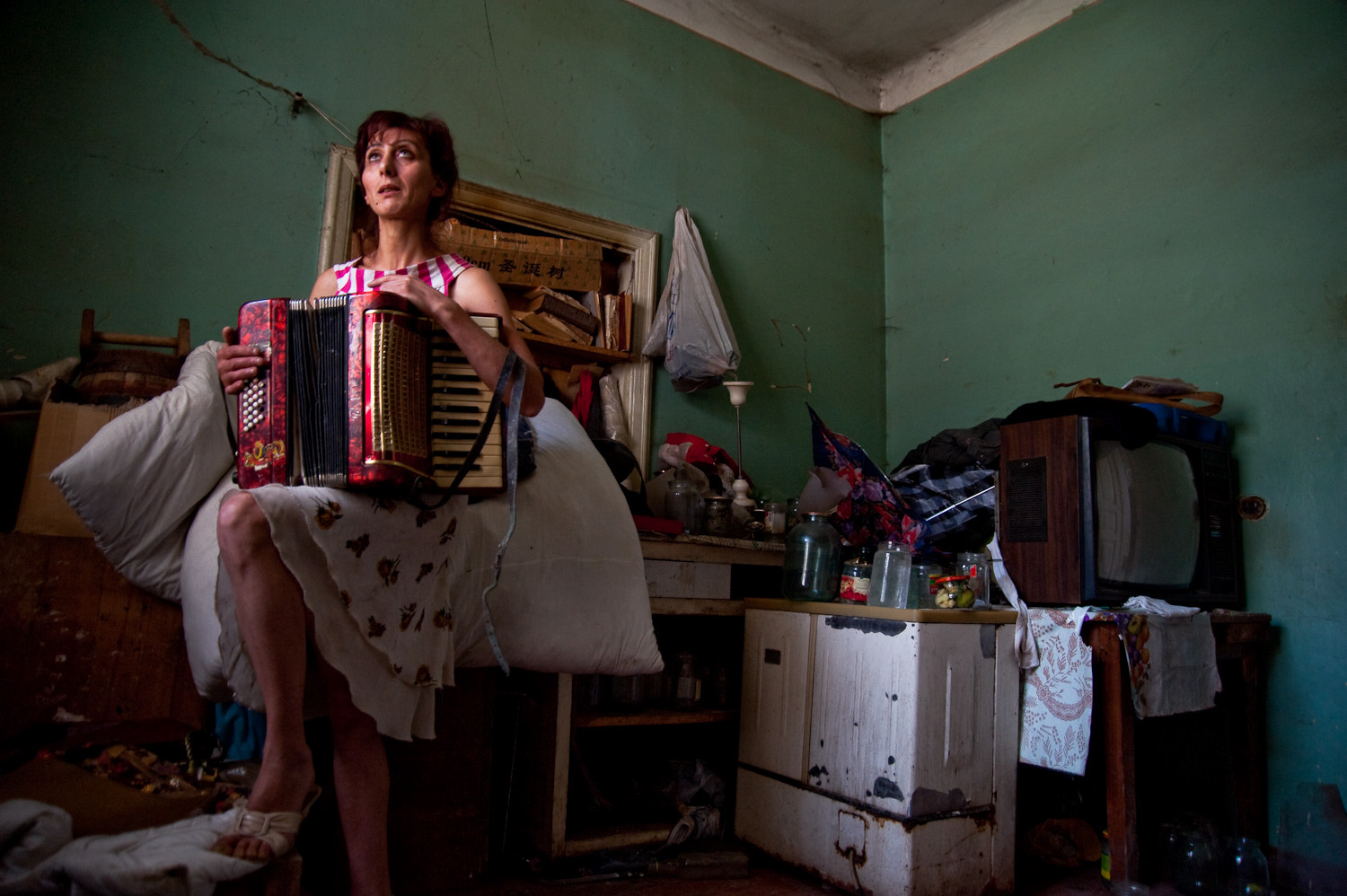 Simonian lived with her four children in Arinch, a town located just outside of Yerevan. She was married to an abusive alcoholic who raped her and beat her throughout their marriage and threatened her and her children’s lives, according to Anjargolian.  With a help of local non-profit, she was able to obtain a legal divorce and move with her children to a dilapidated house owned by her brother. She tries to make a living by buying and selling vegetables.

According to Anjargolian, Simonian is moving back with her parents, a move that took a lot of work because she didn’t want to bring shame on her parents.

“I had much more open, straight forward conversations with the women, that in some ways made the pictures better, we had a mutual trust.”

Anjargolian’s hope is to take the exhibition to the east coast of the United States and Armenia.

WHAT: How We Live, photographed by Sara Anjargolian; Curated by Narineh Mirzaeian and produced in Collaboration with the Tufenkian Foundation

TICKETS: $25, presale. $30 at door. Tickets can be purchased from www.itsmyseat.com. Proceeds go to  Tufenkian Foundation’s Zangakatun Social Services NGO, which helps these families and hundreds of others make the difficult transition from destitution to engaged and stable lives.