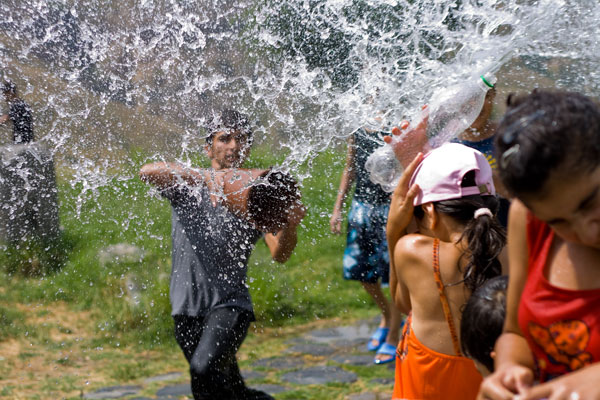 As they have for thousands of years, Armenians gathered on a hot summer day to partake in a festival with pagan-era roots where people of all ages have free reign to drench strangers in water, at least for a whole 24 hours anyway. 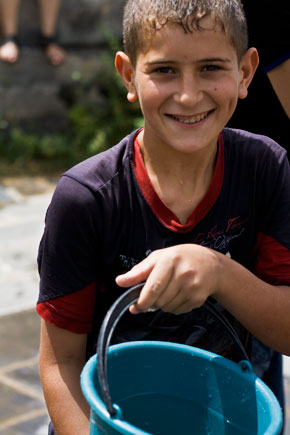 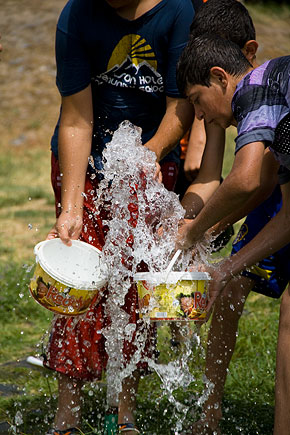 Known as Vartavar, this country wide water fight that as now been absorbed into the Armenian Apostolic Church  began as an homage to Astghik, the Armenian goddess of water, love and fertility. Roses (“Vart” in Armenian) were offered to Astghik as gifts, hence where the festival got its name. 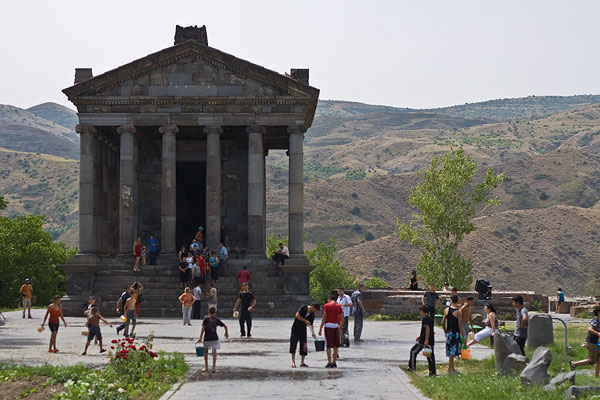 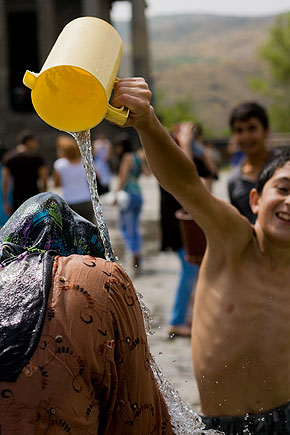 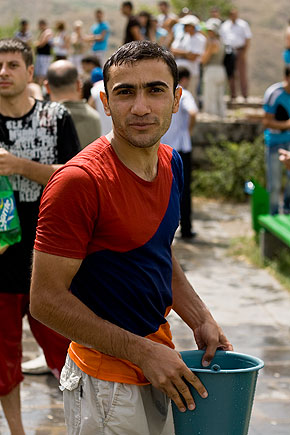 “Let’s get renewed with Astghik’s love,” conductor of ceremonies Gagik Hayrapetyan said, praising the goddess of love.  “Imagine what an Armenia we would have when love reigns in our country.” 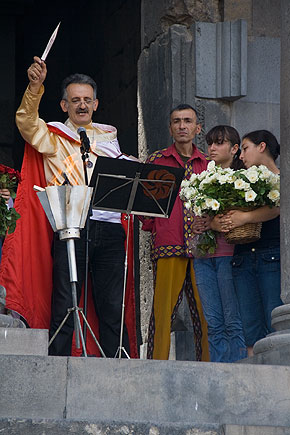 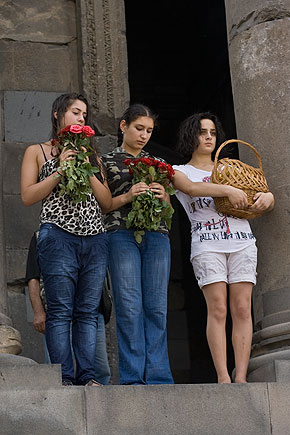 According to Hayrapetyan,the ceremonies hold a special significance at Garni because the temple acts as a strong energetic center, just like it would have done during the time of Ancient Armenia. He sees the holiday as a testament to the history and survival of the Armenian people. “People haven’t changed,” he said. “They’ve always protected their roots.” 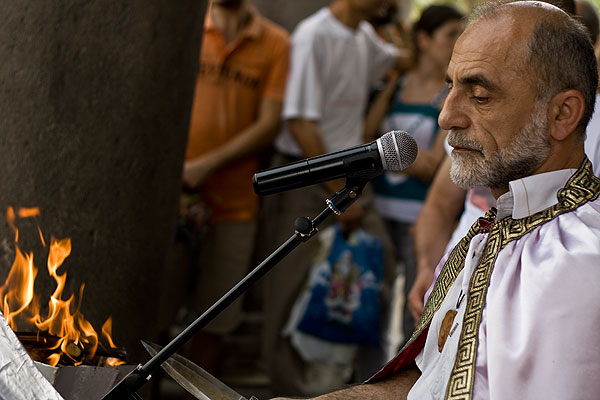 A short distance away from children and teenagers preoccupied with making sure everyone left Garni completely or partially wet,  trumpet players, women with baskets full of roses and men in cloaks carrying daggers circled around the temple, transforming the festivities into a throwback to ancient traditions. 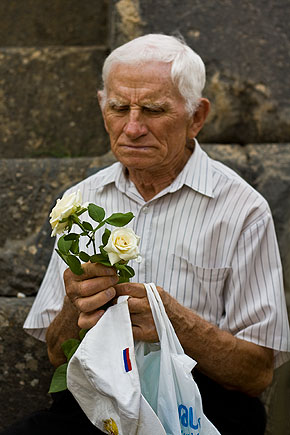 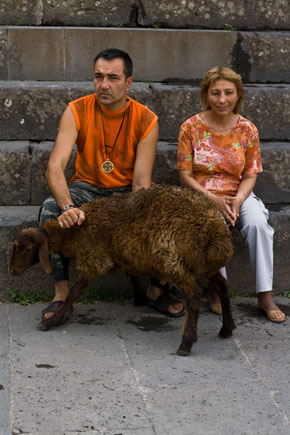 Ancient traditions weren’t all that were being celebrated at Garni, however. After bringing a sheep and a rooster to the foot of the temple and offering them as sacrifices to the goddess (with the ear of the sheep and comb of the rooster cut to shed blood) , Hayrapetyan then asked that  those who wanted to take part in an Aryan baptism ceremony to make their way up to the temple. In recent years, the festivities at the temple have taken a somewhat unexpected turn, where ultra-nationalists have seemingly  intertwined their Aryan philosophy with the pagan holiday, claiming Armenians and a handful of other ethnic groups as descendants from true Aryans, often interpreted as the “Master race,” one that is genetically superior to other races. This concept was used adopted by Adolf Hitler and used in Nazi ideology, in what eventually became known as the Holocaust. 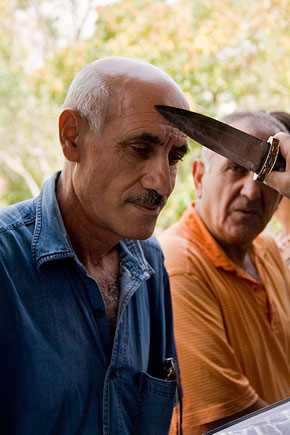 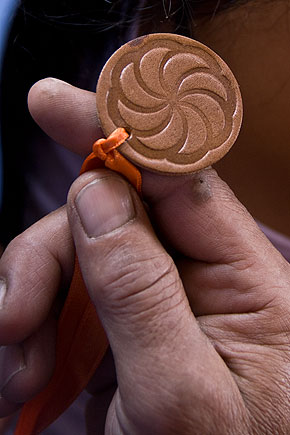 While Armen Avetisian, the  anti-Semitic leader of the Armenian Aryan Union, a small ultra-nationalist party, was nowhere to be seen at this year’s celebrations, swastika-shaped ornaments on necklaces and fabric, salutes commonly associated with the Nazi party and references to Aryanism, “Aryakan” in Armenian, were abound. According to a 1944 Rand McNally’s World Atlas International Edition the Armenian-Aryan connection centers around idea that the “Aryan race” was defined as a group that spoke the Indo-European languages descended from original Proto-Indo-Europeans, that reside in Europe, Asian Russia, Anglo-America, Quebec, Southern South America, South Africa, Australia, New Zealand, Armenia, Iran, Afghanistan, Tajikistan, India, including Pakistan, present-day Bangladesh, Nepal and Maldives. 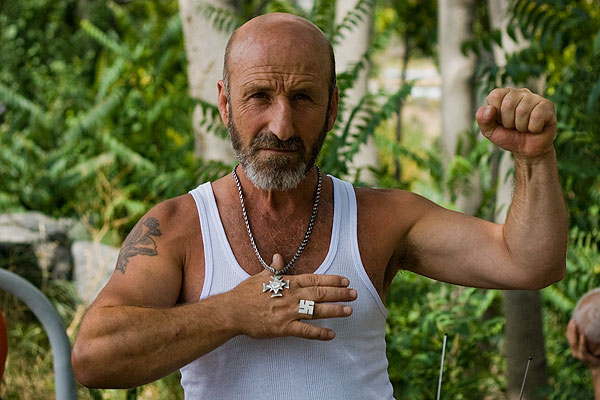 The swastika was associated with Proto-Indo-Europeans by Heinrich Schliemann who classified it as a religious symbol of Germanic, Greek and Indo-Iranian cultures. 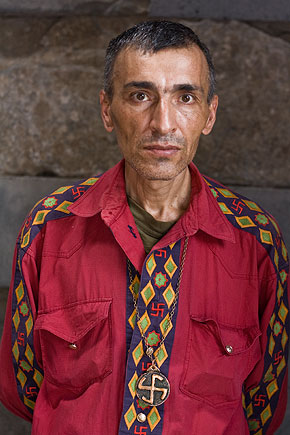 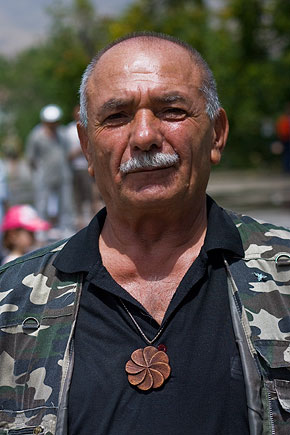 Martik Sargsyan, editor-in-chief of Azdarar magazine, an Armenian magazine published in India, says that the tradition of using water in a festivity like Vartavar can be traced in Iran, Afghanistan, Tajikistan, Germany and India as well. He likened Vartavar to the Indian Holi Festival of Colors. “True Armenians used color water too,”he says. “Rose water, peach water, apricot water. This is a way for us to head back towards nature, where we came from.” A Kharabagh war veteran who spoke about the philosophies of Garegin Njdeh, Sargsyan said he was ready to participate in another war to protect his Armenian-Aryan roots. “This is about how I’ve lived my entire life,” he told ianyanmag when asked to comment about Vartavar. “I’ve been born this way, and I’ve continued to live my life this way and I will die this way – with a weapon in my hand.”

While these undertones might have been hard to ignore during the afternoon, for most, it was a day to revel in the excitement and freedom of partaking in the ultimate water fight. Check out our video of the lighter side of Vartavar at Garni: