A while back, I was chatting with Naira, an Armenian friend of mine, who was pregnant at the time. I was asking her whether she and her husband had picked a name for the baby yet, if they knew which hospital they would be going to, etc.  You know, pregnancy talk. Then I asked whether her husband would be allowed to stay in the delivery room, assuming that she would want him at her side. Naira, whom I consider to be an educated person, was confused by my question… she replied with a question of her own: “Why would he want to stay?”

To an outsider looking in for the first time, Armenian women seem to be liberated, especially when compared to women in neighboring Muslim countries; they can generally dress as they please and go where they like without fear of persecution or assault, have access to health care (including birth control) and higher education, and can freely participate in democratic processes. But a mere scratch on the surface is enough to reveal that this land is steeped in old-fashioned, macho values and crisscrossed with clear boundaries separating the roles and expectations of men and women.

Aside from newsworthy cases of discrimination and domestic violence, like the infamous 2010 tragedy of Zaruhi Petrosyan, there are countless instances of blatant sexism that occur every day, unnoticed and undocumented, for they are seen as nothing unusual. And in some situations, this mindset leads to discrimination against males as well as females – locals and foreigners alike.

Most hospitals here don’t permit husbands in the delivery room when their wives are in labor.

I learned about this policy when an American friend of mine had to shell out hundreds of U.S. dollars to convince the nurses to let him remain with his Armenian wife as she delivered their first child in March 2009. They gave in and let him stay, but kicked him out shortly after the birth, and he basically didn’t see his wife and newborn son until they were discharged and he took them home three days later. It was his story that prompted me to ask Naira about her choice of hospital when she was expecting. Imagine my dismay at her response.

A lot of people are familiar with the double-standard imposed upon young men and women – that is, a girl is expected to remain a virgin until her wedding night, although a boy is expected to enter marriage with some level of sexual experience – because it is a phenomenon not unique to this country. Slightly less known, or perhaps just less-talked about, is the frequency of male infidelity in Armenian marriages. For example, a female friend relates the following anecdote:

“I went to a popular disco one night and danced with a guy named Artur, and we hit it off right away. We started seeing each other casually, and over drinks one evening, he told me he was really excited because his wife was pregnant! I didn’t even know he was married, but apparently, he wasn’t trying to hide that fact. Obviously, I broke up with him, but what is still so strange to me is the fact that he felt absolutely no shame in what he was doing.”

Incredibly, I have heard similar stories from other single women, mostly expats and Western volunteers. Some, who have been here longer than I have, tell me that such conduct is culturally acceptable. After speaking to a number of locals and foreigners about this, what I gather is that many Armenian husbands actually have so much “respect” for their wives, they consider them sacred, and would never make them do “dirty” sexual acts…only gentle love-making and intercourse for the sake of procreation.

They prefer to satisfy their more carnal desires with another girlfriend or prostitute and thereby keep their marriage pure and holy (when in fact, this is how they transmit STDs to their wives). In many instances, such as when the wife is pregnant or has recently given birth, this behavior – like pre-marital intercourse – may even be expected of them. Meanwhile, there is plenty of discussion about what happens to Armenian women who have extra-marital sex.

Having conversations with the average person here can sometimes feel like stepping back in time, and not in a good way. When I mentioned to a colleague the other day that I allow my son to paint his nails occasionally, she expressed concern: “Aren’t you worried he might like it?” No, obviously, I’m not worried, and yes, obviously, he does like it. So what? It’s a phase, and truthfully, it’s already passed.

This seemingly insignificant dialogue made me wonder about something much larger. I’ve always been under the impression that parents want to give their children the whole world, so how can one say to one’s child, “No, you can only have this half of the world”? This is the very attitude that leads to misogyny, homophobia, bullying, and violence against children and adults in schools, in the military, in families, and in other institutions throughout the country. 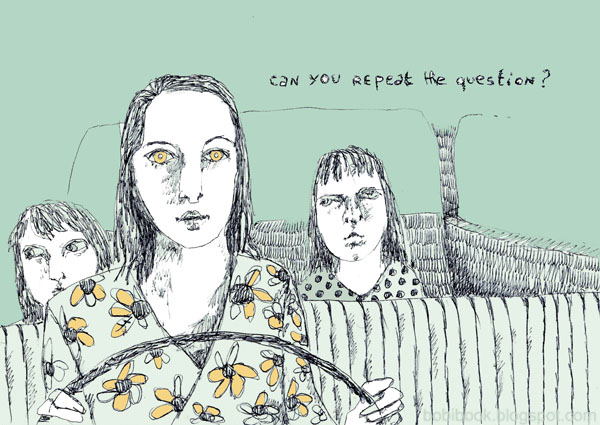 Can you repeat the question?/by _bobi + bobi/Flickr via Creative Commons

I can appreciate the need to preserve certain elements of cultural heritage, but if it comes at the cost of suppressed individuality and trampled dreams, is it worth it? Especially when Armenia wants so much to be recognized as a modern, forward-thinking European nation. Clinging desperately to harmful “traditional” values will not get her there.

So when I want to understand the problems caused by sexual inequality in Armenia, there’s no longer any need for me to read shocking stories about bride-napping, red apple ceremonies, and sex-selective abortions in remote villages, or about the miserable state of sex education in schools, employer discrimination against married and pregnant women, and the low visibility of women in politics right here in the capital. I already know.

As an outsider looking in, even I am not completely safe from the far-reaching claws of bigotry in my everyday life. I know it when men, thinking they are being polite, treat me as weak or inferior.

I know it when I raise my voice or make a cynical remark, and people stare at me in disbelief. I know it when I can’t have an innocent girls’ night out with my Armenian friends because their boyfriends and husbands won’t “allow” them to go out – so much for feelings of superiority over Iran. The government and people of Armenia have a long way to go if they aspire to be like France, Canada, the United States, and other developed countries – whose people are, of course, still fighting for equal rights themselves.