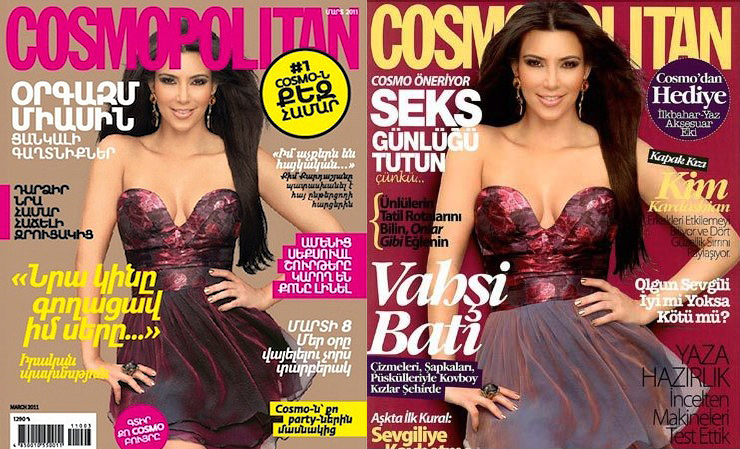 On the heels of the premiere of Armenia’s first issue of popular women’s magazine Cosmopolitan featuring celebutante Kim Kardashian who is of part Armenian descent, the Turkish edition just released their April edition with the same cover – a move that reportedly left her and Armenian groups fuming, according to celebrity gossip outlet TMZ yesterday, especially considering the timing. Armenians commemorate the lives of 1.5 million genocide victims  on April 24 – an event which the Turkish government still denies took place.

The celebrity gossip outlet quoted Aram Hamparian, executive director of the Armenian National Committee of America, as well as nationally known lawyer Mark Geragos, both of whom expressed anger at the use of her image.

“Instead of trying to turn a profit in Turkey by callously featuring a cover photo of a descendant of Armenian Genocide survivors in its April issue, Cosmopolitan should find creative ways to educate its readers about the Turkish government’s shameful effort to cover up this atrocity,” Hamparian said.

Geragos called the cover “rubbing salt in the wound of the Armenian people.”

The story was picked up by numerous outlets, including Salon, the Los Angeles Times and USA Today, while many took to Twitter and Facebook to discuss the news.

Blogger chotai expressed disappointment in Kardashian’s actions, saying that it was a missed opportunity for greater genocide recognition:

Had you thought ahead a bit instead of getting your nails done or whatever else it is that you do on a daily basis, you could have weaseled Cosmo into using your fabulous photograph on their cover in exchange for a little article with a little mention about your family’s history and how imperative it is that Turkey, along with everyone else, should recognize this history. This could have have been an opportunity to do a little outreach work – but instead you’re “upset.”

Kim Kardashian even addressed her appearance on Cosmo Turkey on her own personal blog, giving a somewhat subdued response than initially reported by the likes of TMZ,. According to her, the shoot the photo was taken from was specifically for Cosmo’s international publications.

When I did this shoot for the international covers I had no idea that Turkey was planning to run my story on their cover THIS month, considering Genocide Remembrance Day is this month. My Armenian heritage means a lot to me and I’ve been brought up to be incredibly proud of my family’s background and culture so as an Armenian-American woman it is a huge honor for me to be on the first ever Armenian Cosmopolitan cover (pic above.)

I have an amazing relationship with Cosmopolitan Magazine. World-over, Cosmo is known as a fun and inspiring magazine for women of all races, shapes, sizes, regardless of their political beliefs and I really hope that if I can bring awareness to the issue, then this in an accomplishment.

Kardashian’s Armenian ancestry stems from her fathers side, Robert Kardashian, who shot to fame after representing O.J Simpson after his highly publicized trial. He died of esophageal cancer in 2003. The family celebrates his life with an annual trip to Lebanese-Armenian restaurant, Carousel.

Update: Watch Kim Kardashian talk about the cover and her hopes for bringing light to the Armenian Genocide below: