The recent passage of the French bill criminalizing genocide denial in France has caused massive rejoicing across the Armenian nation both at home and abroad.   While the emotional reaction of Armenian communities is understandable given Turkey’s continued state-sponsored decades long revisionist policies, sadly, there is nothing tangible here to rejoice.   If anything, the Armenian Nation has yet again become a thankful tool of foreign powers, and while there is an abundance of appreciation towards Sarkozy and France, what exactly do we have to be thankful for?

The law itself is fundamentally flawed insofar as it aims to undermine a most basic tenet of democracy, will likely hamper the issue of Genocide recognition as opposed to facilitating it, and is merely being employed by France to address its own narrow self-serving political ends.    On its face, the purpose of the proposed law is to deter and punish those who deny the historical fact of genocides, including the Armenian genocide, and in doing so defend the moral interests and honor of the victims.  Sarkozy stated something similar to the latter in his January 20th letter to Erdogan, writing that the intent of the bill is to heal wounds and protect the memories of victims.  In short, the law, as its proponents would argue, helps restore “justice.”

But how, exactly, does it do that? 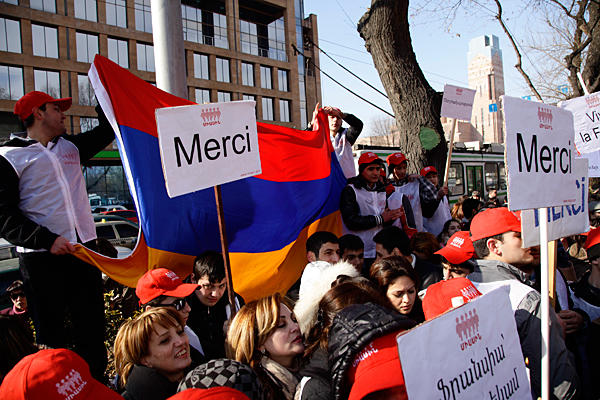 If anything, France’s passage of the genocide denial bill is nothing more than a resounding endorsement of Turkey’s own notorious Penal Code 301.  Similar to that code, the French law paints in broad brush strokes and does little to distinguish between a form of denial that has an element of hate speech (which is the intended purpose of EU framework decision 2008/913/JHA), and language that is purely denial without the added quality of hateful or racist sentiments.

Over the past couple of decades there have been an increasing number of meetings and conferences between Armenian and Turkish academics and members of civil society seeking to openly discuss their mutual past.  Numerous Turkish scholars now openly accept that massive “atrocities” took place in the waning days of the Ottoman Empire, with a growing number of Turkish intellectuals calling it genocide.  Though in its infancy, a movement is now noticeable within Turkey itself towards eventual recognition and reconciliation; this is occurring within a larger democratic movement within the country.  Laws dictating what can and cannot be said stifle and run contrary to the basic principles of open forum and thought, and can arguably erode the progress made by Turkish civil society as a whole by causing each side to hold on more tightly to its “truth.” Such a bill has the potential to make denial itself a patriotic, nationalistic act, moving us further away from the discourse which has slowly but surely blossomed.

Sarkozy and France have their own political and socio-economic reasons for passing this bill at this time.  Moreover, France’s seemingly gracious and honorable bill will now be used as political clout for years to come when Armenian issues are raised.   The favor, as it were, has been called in; France is now considered the great friend of Armenians.  It will be harder now than ever to push France in its myriad of councils and unions – from PACE to the EU to the UN which make decisions regarding the Republic of Armenia – to help promote democracy and justice within Armenia, because, well, the favor has already been called in.

But it is these issues – democracy and justice – which are most important to both the Republic of Armenia and the Armenian nation today.   What is the effect of such a bill in France, or say even all of the countries of the world, if Armenia is neither safe nor secure?  One of the greatest problems facing Armenia’s viability today is the massive emigration it is experiencing due to a myriad of reasons, including political, economic, and social inequalities and upheavals.  Of course, France is entirely silent on those issues. Thus, France’s genocide denial bill is nothing more than crumbs thrown to a struggling people.  We must stop feeding off such crumbs, and demand our rightful place at the table.

In the end, nothing can bring back the 1.5 million souls that were lost during the Armenian Genocide.  What then, does healing entail?  Recognition by Turkey, and the world?  What would best allow us to honor and memorialize the victims of the Genocide?  First, various organizations and countries must stop using these crimes of humanity as mere chess pieces in their own political and economic games.  Second, to bring about a world where such atrocities cannot and do not take place, a more ethical, open and responsible world.  And finally, to have, in spite of our history and all which comes with it, a free, strong and independent Armenia.

Yet nothing close to any of these will result from the French bill. Instead, those who question and challenge aloud will be deemed criminals.  As much as this pains those of us who are descendants of the victims of 1915, we must be able to look beyond that pain and seek justice not by imposing restrictions similar to those forced upon our ancestors 97 years ago, but by making sure such restrictions are never again imposed on others, Turks or otherwise.

Edgar Martirosyan is a practicing Attorney in Los Angeles, California.  Edgar received his B.A. in Political Science from UCLA, and his Juris Doctor degree from UCLA School of Law.  He is a Fellow with Policy Forum Armenia, and a member of the Board of Directors of ARPA Institute.