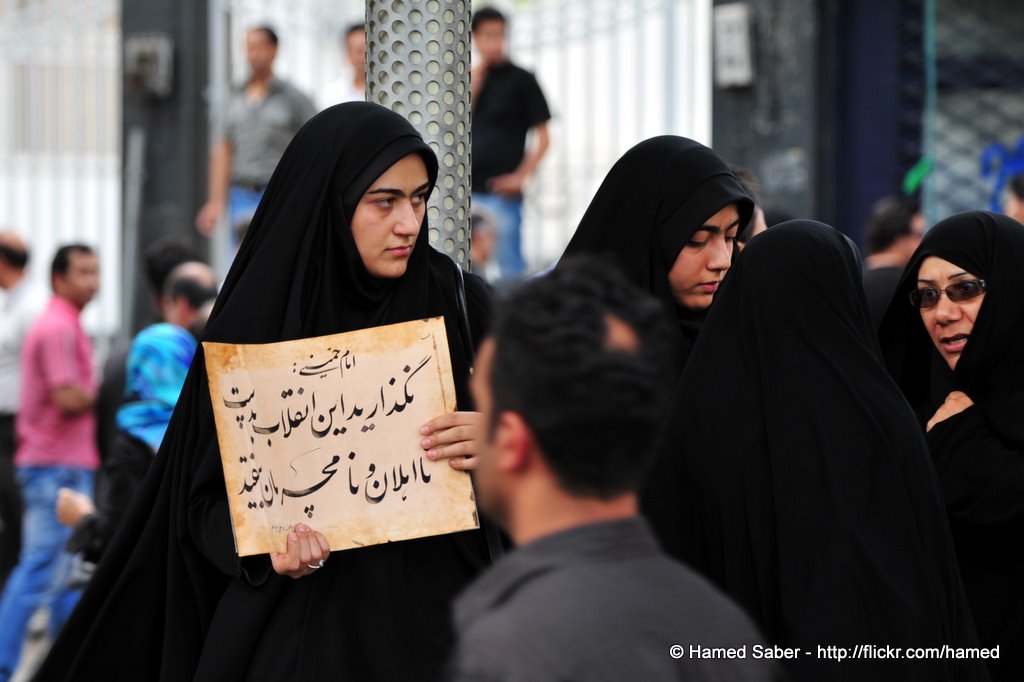 by Hamed Saber/Creative Commons/ Quote: "Don't let others to grab your own revolution"

No longer can anyone deny the incredible power of social media that has captured Iran and the aftermath of their presidential election right dead in its center. Twitter and Facebook have not only revolutionized the way information is spread and reported, but they have given a face, heart and soul to the people of a country who has been silenced for 30 years. Below is a compilation of the most moving videos to grace YouTube in the last 12 days since protests began to take place on the streets of Iran and elsewhere in the world in support of the Iranian people who are fighting so bravely for their right to freedom and life.

“Where is this place where young shed blood and then people go and pray? Standing on that same blood and pray. Where is this place? You want me to tell you? It’s Iran.” A great compilation video of some of the most riveting images and footage to come out of Iran, with a great background track and editing.

Our country is going through sensitive and future determining times. We are worried for our motherland, she is worried for us, and her feelings are hurt. There are very few outside of Iran and the Iranian Diaspora who know about Googoosh, one of the country’s most reveled singers, if not the most reveled. She has been a huge presence on the music scene since the 70s, however after the 1979 Iranian Revolution, she did not perform or record again because of the ban on solo female singers. She currently resides in Los Angeles, but her voice is heard still around the world, especially in this moving tribute to Iran.

Tell me what has become of my rights/Am I invisible because you ignore me?/Your proclamation promised me free liberty. Michael Jackon’s controversial anthem “They Don’t Really Care About Us” seems perfectly fitted against a backdrop of  powerful photos of Iranian men and women risking their lives for justice.

I think I’m a littler braver now, because when someone gets hit once, the second time doesn’t matter. When they’re going to hit me, I say “hit me, I’ve been hit so many times” and this time, it doesn’t matter, I just want to help my brothers and sisters.” Amazingly, CNN managed to get hold of an Iranian woman in Iran participating in the protests. Her account of the situation is heartbreaking, but shows how much courage she has had and is a great indicator of the voice and power of women in Iran.

“Come on hit me! Hit me once! Weren’t you just hitting me before?” I have watched many videos in the almost two weeks since the protests started, including Neda’s, and this is one of the few that has moved me to tears. It’s not long at all, but the juxtaposition of power and helplessness in this woman’s voice is almost too much to bear. You hear the voice of the entire country in hers.