By Liana Aghajanian October 9, 2012 in Diaspora 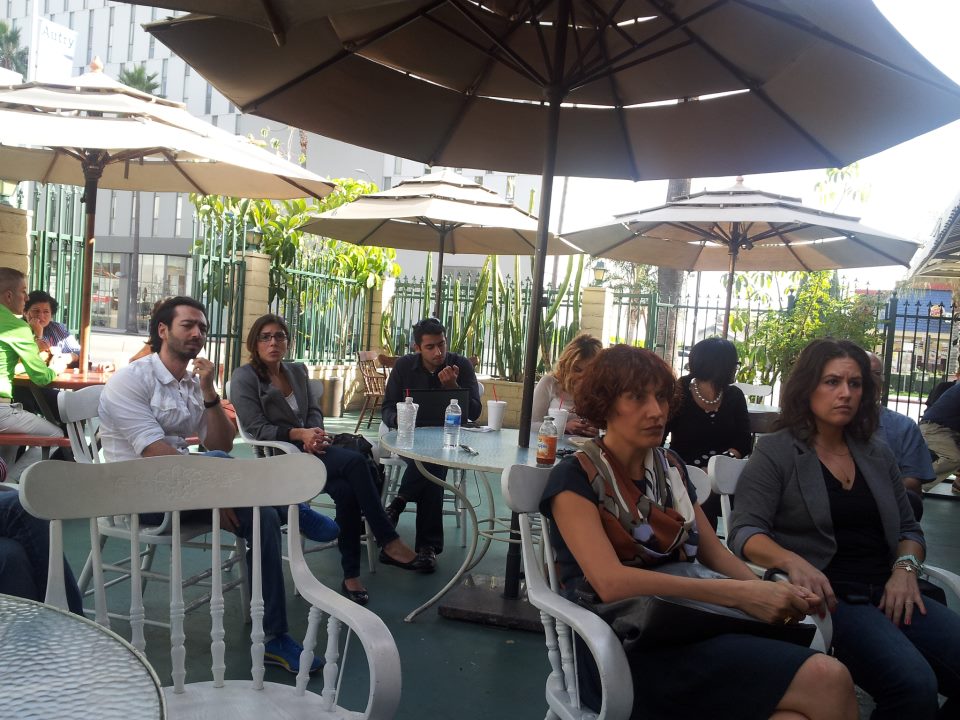 Following successful presentations in San Francisco and New York, a conference tackling Armenian progressivism and politics on the occasion of the Republic of Armenia’s 21st year of independence took an unexpected stumble in Los Angeles because of what organizers described as a security issue that threatened the well being of one of the panelists.

This claim however is being rebutted by both conference participants and audience members who allege that a small fraction of the political sponsor backpedaled, giving contradictory and confusing statements about security issues, causing other panelists and attendees to walk out and hold their panels at an ad-hoc location nearby.

After reaching Los Angeles on Friday, Oct.5, Armenians and Progressive Politics (APP) conference panelist Mamikon Hovsepyan, an LGBT rights activist and president of Yerevan-based NGO, PINK Armenia, was told that threats were made against him and given private security as a precautionary measure. By Saturday however, the situation had taken an unexpected turn as the panelists said they were told by two members of the host organization, the Armenian Revolutionary Federation’s Western Region, that Hovsepyan would not be allowed to speak. The conference was organized by the ARF Central Committee – Eastern Region and co-sponsored by the Armenian Society of Columbia University and the ARF Western Region.

Given the South Caucasus country’s challenges with LGBT issues and discriminations faced by its gay community, Hovsepyan has been no stranger to resistance. Speaking via Skype to Ianyanmag however, the panelist said that the evening’s circumstances raised suspicions among them as organizers were not able to offer any clear and concrete reasons about the security threat and overall situation.

“The whole thing wasn’t very well explained, it was very secretive, we were not aware of all the details,” said panelist and co-founder of the Women’s Resource Center Lara Aharonian. “They were keeping us in the dark, saying ‘listen to us, we know what’s best for you.'”

“It was not clear for me, one was saying it was for my security, another for their security, I couldn’t understand whose security was the most important,” said Hovsepyan.

Kirk Wallace, programs manager in Yerevan for the Armenian Environmental Network said the group was trying to understand and get to the reason why Hovsepyan would not be allowed to speak, without much success.

“At this point, there were two of them, one of them was saying it was for Mamikon’s safety, the other was saying ‘no it’s not about that, it’s about security in general.’ One of them blamed problems with translations. We asked, ‘Is Mamikon in danger inside?’ They said no. They said ‘We cannot give you details. We had a security issue.’

It became clear to the panelists that the worry about Hovsepyan presenting was in fact an internal issue among a few who were part of the sponsoring organizations, rather than an external issue, they said.

“There were so many inconsistencies and no details of the threat, we believe they wanted to make sure we didn’t get these details,” said Wallace.

In a show of support for Hovsepyan, the other panelists, which included Wallace, Aharonian as well as Arpine Galafyan, president of the Institute for Democracy and Human Rights in Armenia and Sona Ayvazyan, project director of Transparency International, Armenia, gathered their material and continued their presentations at  Mexican restaurant “Los Burritos” down the street. A good portion of the audience followed, said Wallace.

The restaurant accommodated the group, which numbered around 30 people and the presentations continued at the alternative location. A few of the organizers, who the panelists identified as being different from the two ARF members they said did not allow Hovsepyan to speak, stopped by and apologized to the group, inviting them to speak on KPFK 90.7 FM radio station, they said.

The panelists said they were willing to forget about the incident until an editorial appeared on Asbarez, published by the Western USA Central Committee of the ARF about the events was posted, which they described as a  distortion of the truth.

The piece, posted on Sunday, Oct. 7 pointed out  that an “unfortunate security issue which could have threatened the well-being of one of the panelists  as well as the safety of attending audience” led the committee to cancel one of the presentations, while offering the presentation paper to be read by another panelist.

Though the piece does not provide detail about the cancellation, Hovsepyan and his fellow panelists say it was his presentation and Galafyan was designated to present it in his absence.

“This decision and ensuing offer caused some of the other panelists to overreact unequivocally and to refrain from making their own presentations, denying the attendees from hearing much anticipated discussion,” the editorial went on to say, causing a few attendees to take to Facebook and express their frustrations about the posted statements. Some criticized the organizers for not securing the location of the conference with the help of law enforcement while allowing Hovsepyan to continue speaking.

Claims that the ARF set out to silence Hovsepyan are being challenged, however.

Vache Thomassian, a member of the organizing committee of the conference said that the organizers were fully aware of the work Hovsepyan, Aharonian and Galafyan were involved in, which is exactly why they were chosen as panelists after thoughtful deliberation, in order to help address the diaspora’s often criticized disconnect from Armenia’s current reality.

“The panel topics chosen for this conference and the speakers chosen to discuss the topics were purposefully bold, unabashed figures that do not shy away from controversy, and are not afraid to share their critical opinions. That was the entire point,” he said, adding that it was disheartening to hear criticism that the ARF tried to silence Hovsepyan or sidestep the issue of LGBT rights.

“If that were truly the intention, the opportunity would never have been provided in the first place, the posters would not have been printed and the plane tickets would not have been purchased. It’s simply illogical to be an entity that extends an invitation with an ulterior motive of quieting a speaker. Critical thought, debate, and constructive discourse are always good things that should be encouraged.”

Thomassian said the security risk against one of the panelists was terrible, but also stressed that it was not fair to label the entire Los Angeles Armenian community or the ARF as homophobic or not progressive.

“I sincerely hope that the narrow and disparaging narrative that some people want to portray does not negate the important foundational work that has taken place to begin to educate our diasporan communities about social struggles taking place in the homeland be they environmental, human rights, women’s empowerment, gay rights or anti-corruption.”

Despite the incident or perhaps because of it, the panelists regarded the conference an overall success, saying that three city tour did a fine job of raising awareness of issues that regular Armenians face in the South Caucasus.

Maro Matossian, a supporter of APP and the director of the Women’s Support Center NGO in Armenia praised the efforts of organization, which began as an initiative of the ARF and was first held in 2006, leading the way for issues like domestic violence, environmental problems and  corruption to be discussed at a community level in the diaspora for the first time, in an effort to bridge the information and idealogical gap between it and citizens in Armenia.

“As a long supporter of APP, I see the value in it, and how it brought progressives together,” she said, adding that she wanted to express her support for future conferences like it. “It included speakers that do not share any Dashnak (ARF) views and in that respect, it is progressive and very inclusive.” 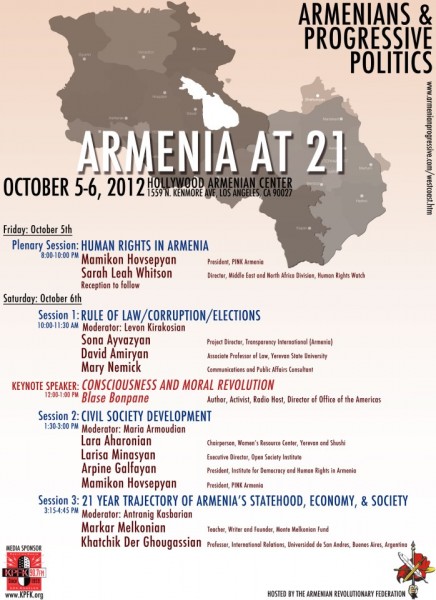 “You know what they say, there’s no such thing as bad publicity,” he said. “The audience was small, so what they did was help spread the issue and now everybody’s talking about it.”

They also stressed that those who they encountered issues with at the conference remain a very small fraction within the Western region of the ARF and do no represent the political party as a whole.

Speculation about the underlying reasons for the incident remains high, with some pointing to Hovsepyan’s use of ARF member of Parliament Arstvik Minasyan’s statements and photo in his presentation in New York as a reason for the breakdown in L.A. The member of parliament was accused of encouraging hate crimes against LGBT people during the bombing and defacing of a gay-friendly bar in Yerevan earlier this year.

The conference, which intended to examine the “21-year trajectory of Armenia’s statehood, economy, and society,” also included speakers such as Chris Hedges, Pulitzer Prize-winning journalist, Sarah Leah, director of the Middle East and North Africa division of Human Rights Watch.

Hovsepyan’s PINK Armenia, dedicated to promoting sex education as well as fighting against discrimination based on sexual orientation in Armenia was honored by the Hrant Dink Foundation in September for their efforts in the country.