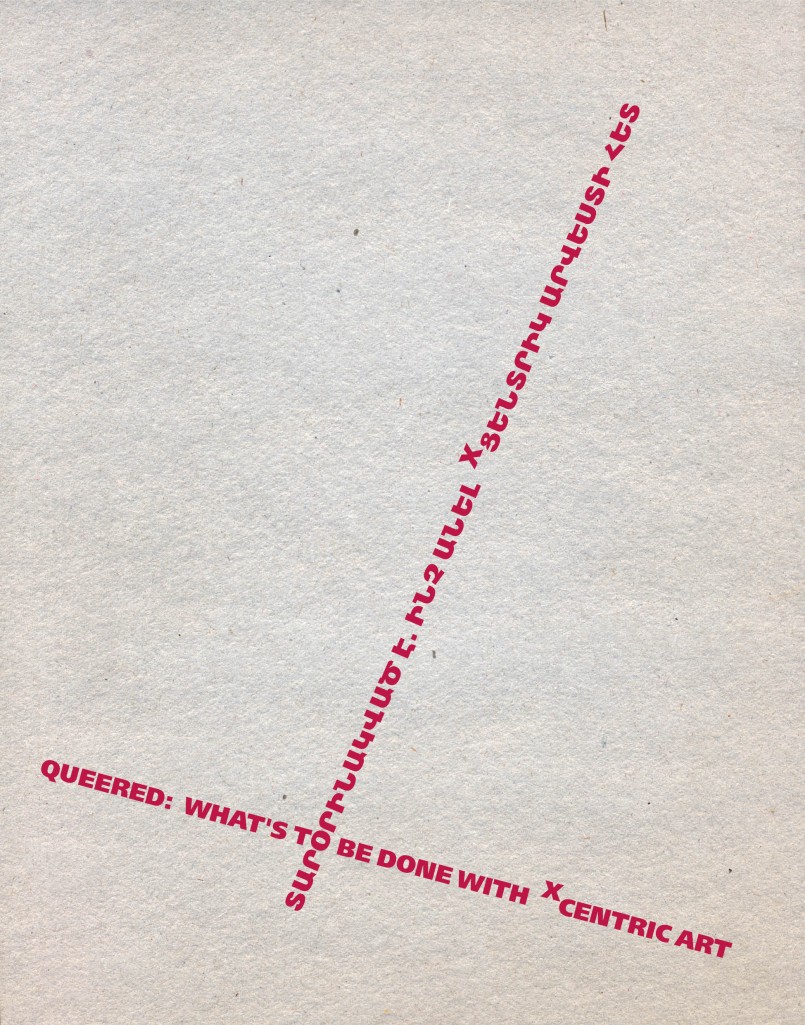 I have often struggled to find a forum where I can discuss issues that affect not only me, but the people around me as well. In Los Angeles, a space where Armenian feminists can discuss such issues and produce together is nonexistent. After reading “Queered: What’s to Be Done With Xcentric Art” (Տարօրինակված է. Ինչ անել xցենտրիկ արվեստի հետ),  I can finally say I have found the space I was looking for; it’s not in Los Angeles, it’s in Yerevan!

The newly published bilingual book (in Armenian and English) includes interviews with, writings of, correspondence between, and artwork by a group called Queering Yerevan – whose members include Nancy Agabian, author of “Me as her again: True Stories of an Armenian Daughter,”Araks Nerkaryan,  one of the key figures of the avant-garde movement of the 1980s known as Third Floor in Yerevan, journalist Lusine Vayachyan, HBTQ (Homosexual, Bisexual, Transexual, Queer) activist Sara Chance and many more.

Queering Yerevan, formerly known as the Women-Oriented Women’s Collective, is a mosaic of female artists, writers and activists from various countries and differing backgrounds from 2007 to 2011. The group initially joined forces to produce creative art events in Yerevan but percolated in to something bigger. “The voices of queer women are still being silenced because of society’s ignorance surrounding the issue of the existence of queer women’s culture in Armenia,” the group wrote in their first blog post, calling the need to create a safe environment for queer women urgent, citing the oppression of queer women by both men and women in Armenian society, homosexuality being perceived as perverse or immoral and the idea that queer women are doubly oppressed by the burdens of women’s traditional roles of marriage and motherhood. The first step, they felt, was  through self-expression, and so, the Queering Yerevan movement was born.

The book discusses the foundation of the collective, its objective, details and debates about awareness, art projects, and critical conversations about LGBT issues in Armenia. Its nature reveals intimacy and camaraderie amongst this almost underground scene of queer women through different mediums. In one particularly interesting excerpt, Shushan Avagyan, co-founder of the Women’s Resource Center in Yerevan and translator of  “I Want to Live: Poems of Shushanik Kurghinian” describes a performance she did with Arpi Adamyan, and Lusine Talalyan in Yerevan’s Republic Square:

“The performance is perceived as an act of treason, and the artists as polluters of high cultural values such as masculinity, national and military pride. And yet there is a lingering sensation of surprise among the viewers, as the familiar representation of war naturalized by those very cultural values that they dogmatically uphold is re-experienced in a new heterodox translation.”

One of my favorite parts of the book, near the end, is an unorthodox collection of letters and emails. It offers a candid view of the struggles the group has undergone during the past few years. According to Talalyan, when their grant proposals fell through they did everything through their own means and abilities to get the book published. The book was funded entirely by people who support and encourage progressive social change, with a significant fundraising effort from the Armenian Gay and Lesbian Association of NY (AGLNY) through the crowd-funding site, Kickstarter, thus reiterating one of the book’s messages: the power of the collective. The end of the book is not the only unorthodox part. The whole design and layout of the book reinforces the “queer” title with riddles placed after some of the passages, event fliers, quotes, and photos of members as well as their artwork.

A still from Melissa Boyajian's "Delicious Fruit," a short experimental video utilizing recontextualized footage of Sergei Parajanov’s "The Color of Pomegranates," included in "Queered: What's to Be Done With Xcentric Art"

The importance of the content and publication of this book is multi-layered. It brings to light a variety of issues that are considered taboo in our communities, even in so-called “progressive” ones. The mere fact that a book is even published about queer Armenians is rare in Armenia, where  homosexuality, punished throughout and after the collapse of the Soviet Union, was decriminilaized in the South Caucasus country in 2003, though the stigma remained. In Armenia, LGBT folks live in a hateful and intolerant environment where they experience harassment regularly and are seen as a threat to the nuclear family.

Although in some Armenian diasporan communities the discrimination is not as explicit, the voice of LGBT Armenians are often ignored and overshadowed by “more pressing issues.” 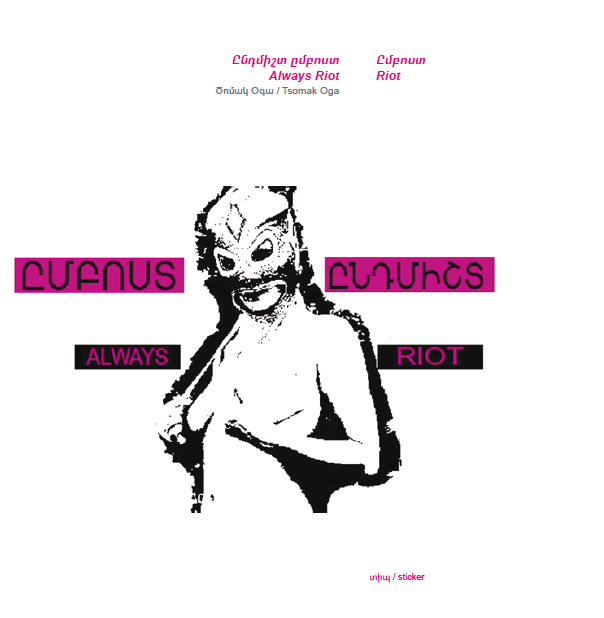 An illustration by Tsomak Oga, founder of the Yerevan-based riot grrrl band, Pincet, in "Queered: What's to Be Done With Xcentric Art." Riot grrrl is an underground feminist punk movement founded in the U.S.

Although a book like this is rare, it is also vitally important: it presents images that are not seen often enough. There is a critical need to document movements and stories such as this in hopes that it will spark dialogue about the hetero-normative paradigm we are so used to. We cannot move forward if we do not discuss and explore gender, sexuality, “coming out,” androgyny/trans identities , and its relation to our Armenian identity. This book is a step forward in grappling with these questions and the beginning what I hope is a long and fruitful dialogue.

“Queered: What’s to be Done With Xcentric Art,” is out today and was published by Tigran Mets Publishing House. It is in sale in bookstores across Yerevan and can also be ordered on the Queering Yerevan blog.