By Contributor October 27, 2009 in Arts & Entertainment 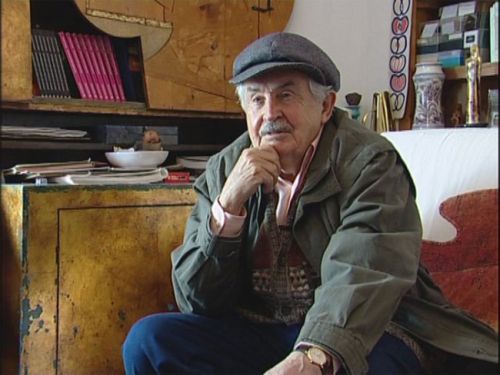 Rouben and Vahe Gevorkyants’ film on legendary and world renowned Italian screenwriter Tonino Guerra, “Autumn of the Magician,” is a meaningful and introspective look into Guerra’s life, loves and enduring romance with Armenia. Through the use of one-on-one interviews, footage from Guerra’s films and powerful images of otherwise ordinary objects and activities, it is not hard to see why this 2007 film has been nominated for an Oscar in the Best Foreign Language Film category for 2010. Guerra himself has earned three  Oscar screenwriting nominations for “Casanova” ’70 in 1965,  Antonioni’s “Blowup” in 1966 and for Fellini’s “Amarcord” in 1973.

With his cab hat, salmon colored shirt and knitted vest, Guerra’s zest for life, even at 87, drips off the screen of this 52 minute documentary. He looks longingly to the distance and remembers Armenia, the country he calls “another world;” one that captured and changed him forever. His love for Armenia has led him to give an exhibition at the State Picture Gallery of Armenia. A fund in his name has also been awarded to Rouben Gevorkyants for his contribution to international cinematography.

“One can go to Armenia for a little while,” Guerra says, “but still turn into an Armenian.”

“Autumn of the Magician” manages to gracefully showcase the magical essence of a man who “will live on the Earth, forever.” It also exhibits footage that otherwise might remain forgotten, like film master  Sergei Parajanov’s funeral procession, that took place on a hot day in Yerevan. As people crowd the streets and the casket is pulled away, Guerra remarks in the distance, “Why are we born, if death takes it all away?” Of course, Guerra himself is a big fan of Parajanov and one of his curators. He also made a proposal to organize a photo exhibition dedicated to the Armenian famed filmmaker in Italy in 2008.

Guerra, a shy man who prefers to remain outside of the public spotlight in his Italian hideaway, works on his on his paintings, with his wife Laura by his side, who has traces of Armenian heritage and has dedicated her life to him. He is not just a poet, or screenwriter or painter, but a sculptor, a playwright, an architect, a journalist, a builder, a patron of the arts, a teacher, a metal worker, an inventor, a public figure, an agronomist, a gardener, a chemist and all together a brave man. On top of that, he is also a football player and a saxophonist.

“Autumn of the Magician” is a subtle, inspiring look at a man who loves to live. Its beautiful imagery – whether it be of Guerra’s home, his magnificent sculptors scattered in various locations in Italy or an item as ordinary as a dripping faucet shrouded by approaching dusk- makes you retain a few pieces of Guerra’s magic, if only for a little bit under an hour.

The haunting soundtrack which has the danger to lead to all kinds of romanticizing daydreams about love and life is the backbone of the film in many ways and aids this look into the psyche and being of a creative force that is destined to live forever. Though it has not yet been translated into English, it should be, so that all can understand Guerra’s simple, yet serene message.

“I would like to say again that the sound of rain is beautiful, and that when snow falls and whitens our thoughts, it’s wonderful,” says Guerra. And with those words, you are left feeling that yes, life is beautiful, you just have to open your eyes a bit more to see it all.

View the trailer of “Autumn of the Magician