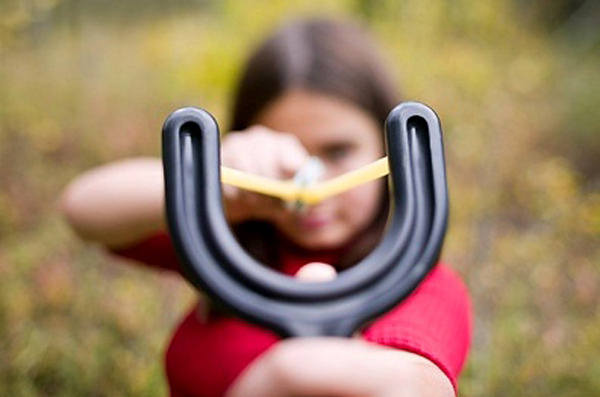 “Oh Tamar! Tell them the barsadig story!” my mother exclaims, jumping up in her chair and taking a sip of her wine. “Akh Tamar, inch guh sirem ayt badmutyunuh.” (“I love that story!”) We’re sitting at the dinner table with friends, peeling apples and preparing fruit to share with each other. Mom urges me to speak up as I peel clementines and carefully quarter them for our guests. I laugh and shift in my chair, take a deep breath, take a sip of my wine and look over to my mother, who peers out from over her spectacles. I enjoy telling this story, but anticipate the moments when my mother will chime in and add her own memories. I often think of this story when remembering my childhood in Los Angeles.

A barsadig is a slingshot. In the Old World, the barsadig was used for hunting as well as recreational purposes. The word itself is quite antiquated – barsadig – and in fact, most of my Armenian friends don’t even know what it means. I had no idea what this barsadig was myself until my fateful encounter with one at age 6 during my first week of Armenian school.

My entry into Armenian school was a unique one. When we first moved to Los Angeles from Iowa, I spent two years at Montessori school where I learned about community, sharing, and self-confidence. When I was 5, my parents decided to send me to Armenian school. Their choice was Holy Martyrs Ferrahian School in Encino, where my mother taught high school English. Ferrahian is a huge building surrounded by a number of smaller buildings and courtyards next to the Armenian Apostolic Church. In the warmer months, the school resembles a mirage of cement surrounded by heat trails with no shelter from the sun. In those days, the area behind the school was a dirt field where the students would play at lunch and recess, soon regretting this choice because of the amount of dust and dirt it deposited on our shoes, uniforms, face and hair.

Ferrahian’s founder, and the principal at the time, was Gabriel Injejikian. He was a tall, thin, lively man whose passion was the promotion of ethnic pride. My introduction to Mr. Injejikian was a memorable one. One morning, Mom and I went to Ferrahian together. After waiting in the hallway and shifting around impatiently in my uncomfortable orange plastic chair – you know, the kind that makes the backs of your knees sweat if you sit there for too long – Injejikian called me in and sat me down in his office. He wore a 3-piece suit and peered at me from behind his spectacles very much like my mother does to this day. My mother had cut my hair the night before and as always had left my bangs completely crooked.

Composing himself as if he was about to conduct a business meeting, Injejikian leaned in, smiled, and asked, “So Tamar, would you like to come to school here at Ferrahian?” He spoke to me as if I was 25 and was a prospective employee, but I was only 5 years old at the time.

“Um, maybe.” I replied. “Well, I’ll make a deal with you, Tamar. How about if you come to Ferrahian as a first grader in the fall instead of as a kindergartener? Would you like that? Eench guses? (What do you say?)” And with that offer, I was set. I skipped kindergarten and entered the Ferrahian School as a confident, sprightly first grader with crooked bangs and a missing front tooth the following autumn.

Ferrahian was different from Montessori. For one, I had to wear a uniform. Can you imagine the discomfort a 6-year-old feels wearing a stiff, blue plaid dress over a polyester-blend white collared shirt in 90-degree Los Angeles weather? On the way home in the car, I’d sleep in the backseat of Mom’s red Dodge, melting in the heat and trying desperately not to lean against the metal seatbelt buckles that had baked in the sun all day.

Our house in Glendale had a little shack in the backyard – kind of like Dorothy’s house in The Wizard of Oz – and my father had insulated it with little bits and remainders of carpeting he’d found at various warehouses. It was his place to get away from everything and he often retired to “the little shack” to work on composing or new inventions. One weekend early into my first year at Ferrahian, my father disappeared into his studio, emerging many hours later to speak with me. It was late afternoon on a Sunday and I was preparing my homework for the following day. Dressed in his usual Sunday outfit of slacks and a white tank top, he wiped his brow and turned to me. “Tamar janig, (darling) I made this for you.” he said beaming as I looked down at the little object in his hand. It was a small tree branch perfectly split into a “V,” with a wooden handle attached. Connected to it was a strong piece of rubber elastic with a patch of heavy cloth attached to that. “Asigah barsadig guh gochvi” (“This is called a slingshot”) he said as he showed me how to properly use it and demonstrated the correct angle to take with the slingshot for optimum performance. In his other hand was a small handful of rocks for me to rehearse this new craft.

“If anyone is mean to you,” he joked, “you can use this to defend yourself!” The following morning, I arrived at school – slingshot in hand, ready to show off. I showed the slingshot to my friends, demonstrated its use and beamed at the awe that this little homemade weapon had inspired in my classmates.

Onnig was the first grade class bully at Ferrahian, and for good reason – overweight, with dark curly hair and a face that would scrunch up into a mess when he wanted to start trouble, he was just the kind of problem child that a parent never hopes to have. He marched up to me. “Give me that!” He exclaimed, lunging for my father’s gift. “I want it,” he said, wiping the chocolate residue from the corner of his mouth from a candy bar he’d binged on during Armenian class. “Wait your turn,” I replied, looking around as my friends quietly began to form a circle around us. I wasn’t particularly afraid of this chubby little boy, but seeing as I’d never encountered such a situation before, I didn’t really know how to proceed.

“Come on, don’t be a stupid girl!” Onnig taunted me, finally grabbing the slingshot from my hands and starting to walk away, a smirk forming on his chocolate-encrusted lips. That was it. I felt the rage boil up inside of me. This was a gift from my father who’d spent an entire afternoon holed up in his little shack creating this little masterpiece for his only daughter. My father always taught me to challenge the world if I didn’t agree with something. His hope was that I learn to assert myself in the face of confrontation. Who was this Onnig to take away the object that meant so much? It was a sign of great effort, talent, and creativity, a symbol of the old world even, with its strange name – barsadig. Who was this snotty kid to undercut the importance of this gift – this was my barsadig!

Just as Onnig turned, his face met with my fist and he stumbled back, stunned at the punch that almost knocked him out. Tripping over himself, Onnig fell to the dirt ground clutching his nose in shock. I snatched the slingshot from his fat fingers, dusted it off and held it tightly in my hands, fists still raised in case he challenged me. Mayhem ensued. The teachers who had until that point been carelessly watching quickly ran over and tended to Onnig’s bruises as I was escorted to the principal’s office, already a criminal at age 6. My slingshot was confiscated but I’d stood up for myself. I was elated.

Decades later, when my mother and I retold this story to our friends at the dinner party, she added a bit of information that she’d kept to herself until then. “You know, I went to Injejikian to get the slingshot back, and you wouldn’t believe what he asked me. I went into his office prepared to apologize and tell him we’d punished you for your actions, and he slowly took the slingshot from his desk drawer and placed it in front of me. ‘Taline,’ he asked quietly ‘Do you think I could have this barsadig? It’s so beautifully made. Would Hovannes agree to that?’” Though my mother decided to retrieve the barsadig from Injejikian, she agreed to keep it at home away from any potential conflict.

The incident with the slingshot – this beloved barsadig – was the first time I got into trouble at school, but it certainly would not be the last. I stood my ground against Onnig and continued to stand strong, head held high as I faced the world.

Dedicated to the memory of my father.

Tamar Salibian is a Media Studies PhD candidate in the Cultural Studies program at Claremont Graduate University. Her background is in photography and film, with a BFA from MassArt and an MFA from CalArts. Salibian lives in Los Angeles, where she volunteers at a local dance studio and is a digital media, video, and film criticism teacher to high school students with the After-School All-Stars organization.