Even as far back as the humble dirt road that leads up to it, Zvartnots Cathedral commands itself to be seen. The 7th century monastery, declared a UNESCO world heritage site is more than grand, making it a must-see attraction to tour groups, who are regularly bussed in and take their time absorbing as much of its history as they can.

On this crisp morning however, the site at which Zvartnots stands, untouched for centuries, offers more than just eon old stone.

Beyond its steps, a litter of puppies, huddling against each other for warmth, peak out from the fields. They are enough of a distraction to leave the cathedral behind and wander off. After bellies are rubbed and photos are taken, I naively wonder who they must belong to. 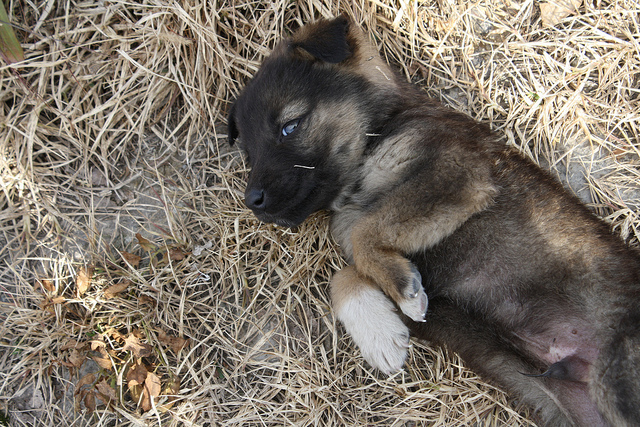 There, at the entrance is a man with a black leather jacket and a mustache as white as snow. His name is Khatchig Lyndyan and he sells postcards and pamphlets of Zvartnots and other Armenian attractions to tourists. 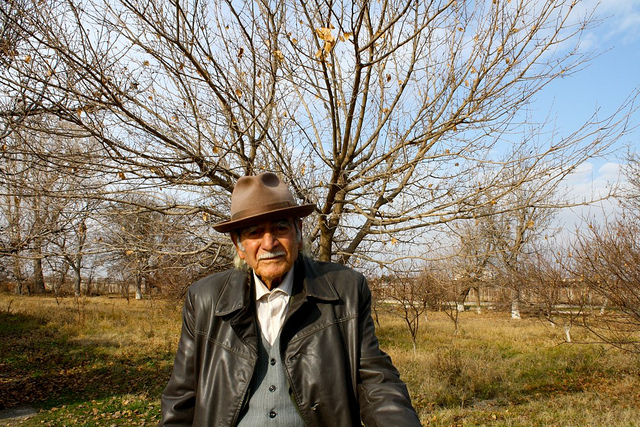 The puppies don’t belong to anyone, he tells me. In the distance their mother appears, practically skin and bones, exhausted from the hungry mouths she has to feed.

But before I can follow her, Khatchig asks me where I’m from.

“Los Angeles,” I say. A sadness sweeps over me. I want to impress him with a more exotic location, like Dublin or even Alaska – a place where the need to explain what being Armenian still exists, where the potential to impact curious listeners is fresh, untainted and charming.

My laugh pierces the cold air. “Los Armenios” he repeats. He’s interested in chatting and so am I, excited at the thought of learning about his life, his family and how he came to sell postcards on the side of the road. Did he have 13 grandchildren? Could he tell me their names? Clearly, Lusine was still on my mind.

Instead, he tells me about his bitter memories of this “Los Armenios.”

Khatchig had a book deal set up with publishers in L.A., he says. They promised several times to print and distribute copies of his book – an almost 400-word work called “Anmar Hoosher,” or “Eternal Memories.”

Except, that they never did. Some time has passed by since his botched deal, but you can see the hollowness it has left in his skinny frame. He now fears that young Armenians will forget where they came from, he says.

I stay silent and shuffle the postcards neatly displayed on his white wooden counter. Luckily, he moves onto other matters, like poetry.

I listen graciously, his audience of one, in the presence of an ancient cathedral and a band of stray dogs frolicking in the field nearby, as he recites a few lines.

Khatchig’s face says too much. He’s mellow and gentle, but his eyes carry a heaviness that weighs him- and me –  down.

I ask him about life in Armenia, there is so much I want to know. The answer I receive is repeated several times throughout my journey:  “What can I tell you? Life is hard. There are no jobs here.”

Later, I find myself at Etchmiadzin, said to be the oldest church in the world, if not one of the oldest, originally built by Saint Gregory the Illuminator. 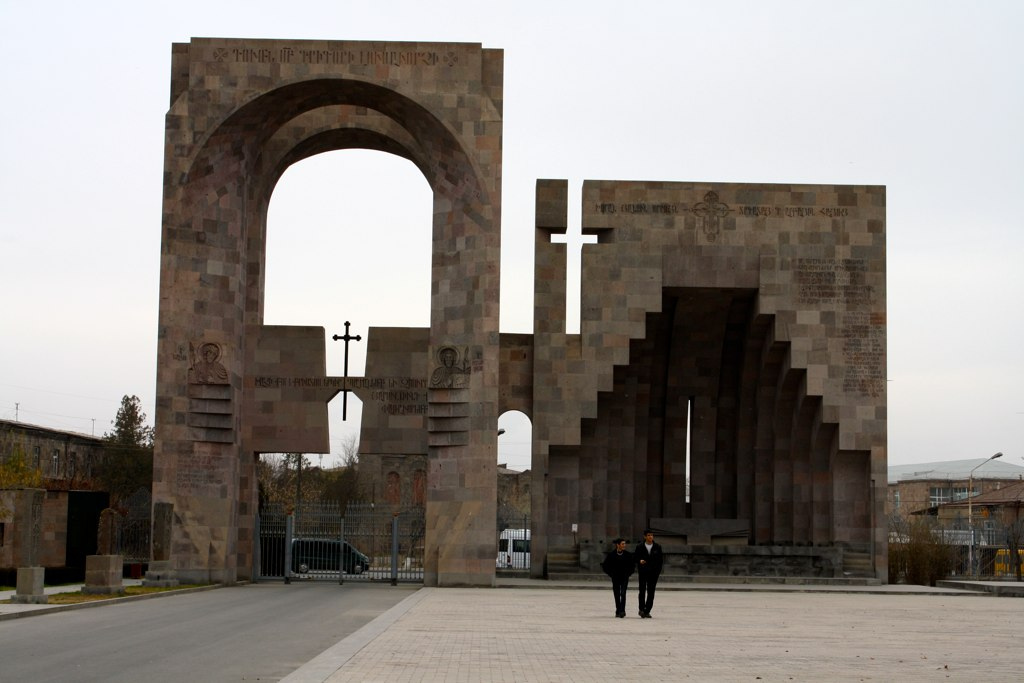 The entrance to Etchmiadzin Cathedral. This open air altar was built in 2001/by L. Aghajanian/ © ianyanmag 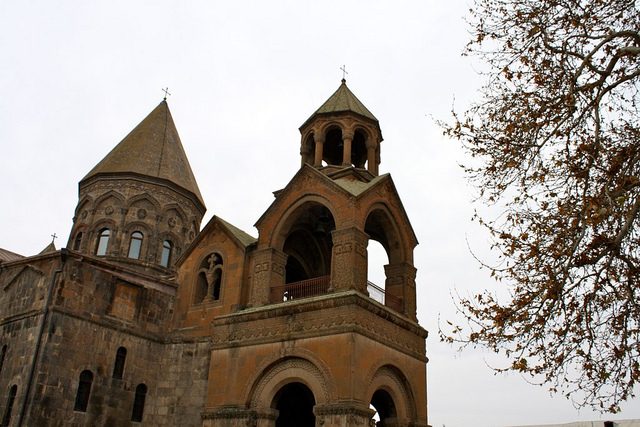 I walk across the parking lot, filled to the brim with luxury cars whose doors give birth to men and women so fabulously dressed, they are a few degrees away from acceptable wedding wear.

“There are no jobs here,” I hear Khatchig say, as a white Porsche drives off. For a second it feels like I’m back in Los Angeles. 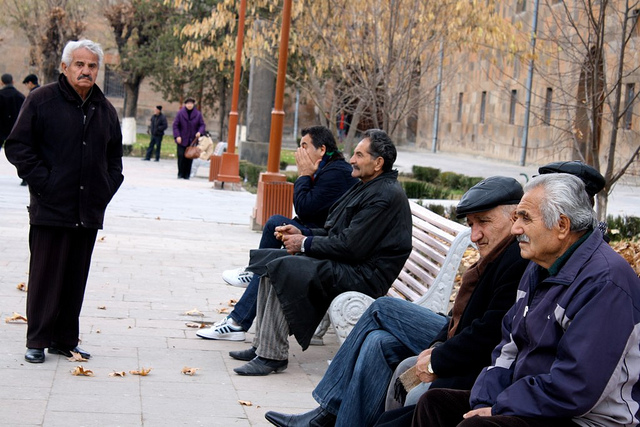 Among those who are sitting on a bench people watching, a scruffy man, cab hat on and rustling beads that slip between his fingers one by one, repeats Khatchig’s question.  Where are you from?

Foreigners, even Armenian ones, stick out like sore thumbs in Armenia.

My new friend has a dismal outlook about the United States. He’s lumped its 307 million people in the same category: corrupt and devoid of morals.

What message does he have for the Armenian Diaspora? I ask.

Crunchy leaves levitate and dance with the wind. Teenagers huddle in corners waiting for their parents. In the shadow of Etchmiadzin, my mind goesback to Khatchig.

In our brief conversation, he had told me that he carries one copy of his book with him, at all times  just in case someone wants to buy it. I told him I did. Maybe it was a clever marketing ploy, maybe it wasn’t. It didn’t matter.

Long after Khatchig and Zvatnots and Etchmiadzin and my friend whose name was never revealed in the mile a minute speech he gave, I open the book.

On the first page, is a biography:

Khatchig “Kesabsti” Lyndyan was born in the Syrian town of Kesab, in the village of Karadouran, in 1932, to a poor family. His father was a shepherd, his mother, pitiable, weak: neither had received any education. Khatchig received his education in Karadouran until he went to Kesab’s central city to further his studies. At the age of 15 in 1947, Khatchig immigrated to Armenia  on the Bobeta boat with his parents, to continue his education in the motherland. You could say that “Anmar Hoosher” is a very typical account of the lifestyle of Diasporan Armenian.

The majority of the story illustrates the Armenian outcast’s emotional state, burdens of life and the longing for mother Armenia. The events depicted are real, therefore it is essential reading for Armenians who are far away from the motherland.

Beyond the cities its Diaspora populates, Armenia remains largely unknown, forgotten. Yet it is a treasure trove of history, of magnificent churches, stone work so intricate and detailed it makes you marvel at the capabilities and power of 20 fingers and two hands, of land that has been walked on, lived on, built upon and fought upon for millennium.

It is captivating and riveting, where flowers are begging to break through and grow beyond stale concrete, where living life is raw and real – a struggle with good and bad until the end.

Yes, Armenia is coated in the past, a jackpot for historians, scholars and archaeologists. The first church in the world, the oldest leather shoe and most recently, the unearthing of a 6,000-year-old winery.

For me, the real marvels of Armenia remain its people, the Lusine’s who want to invite you over for dinner and Khatchig’s who have a sense of humor despite hardship, the men on the benches at Etchmiadzin who look at life the only way they know how, the women who bear the burden of supporting their families of 10 with the hopes of selling a few pieces of sweet bread, the activists who want fairness and equality and government accountability.

The churches are sacred, the mountains are breathtaking, but they can’t engage me. Conversations in Yerevan in smoke-filled underground bars about music, civil society and everything in between, impromptu  poetry in fields and stories across villages that make the definition of living come to life with its unfortunate realities, this is the Armenia I can’t get enough of,  this is the Armenia I want to know and the one I want to write about. 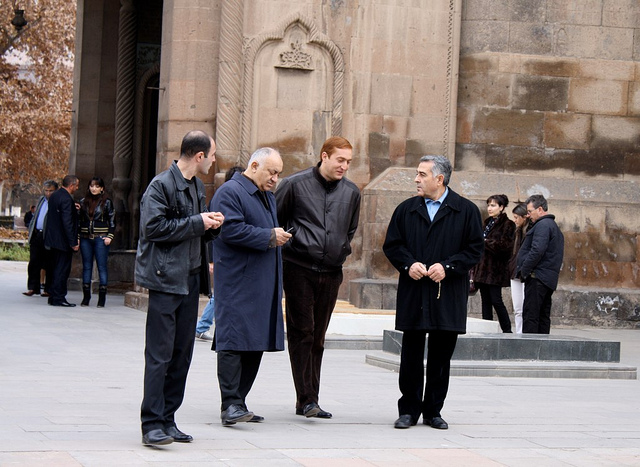 Etchmiadzin visitors outside the entrance of the cathedral/by L. Aghajanian/ © ianyanmag 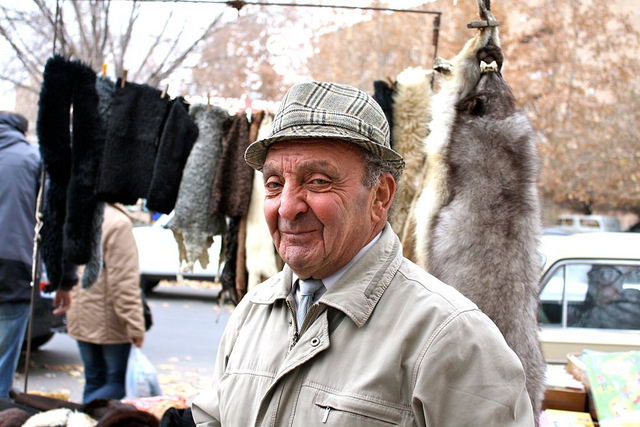 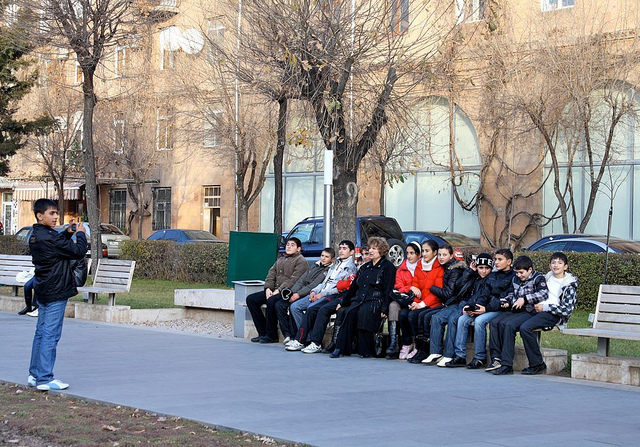 Photo opportunities are aplenty at the Cascade Complex in Yerevan/by L. Aghajanian/ © ianyanmag

Read the first essay of this series: Armenia Diaries: Foreigner in the Homeland. This trip was made possible by the Armenian Tourism Development Agency.