By Contributor April 21, 2009 in Diaspora, Features 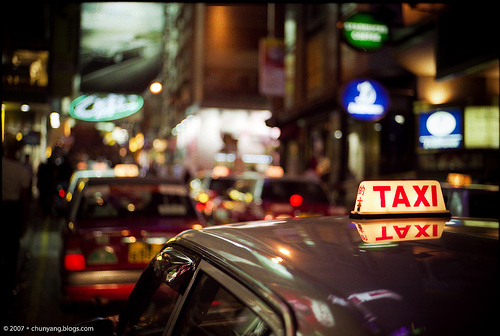 Tired from a never ending work week and desperate to avoid Friday afternoon traffic through L.A’s concrete jungle, I set out with a few workers to have some dinner and drinks around Santa Monica to shake off the tension and share a few laughs.

Santa Monica is perhaps the only section of Los Angeles, besides LAX, where you can find a slew of taxi cabs lined up along the streets, ready to charge expensive fares to get you across town.  The tourists are abundant and quite wise to not even attempt to conquer the complicated freeway system to get them from one end of the City of Angels to the other and so, the taxi cab industry flourishes along the beach lined streets of Santa Monica.

Living 35 miles away from where I work, I had never taken a cab in Los Angeles, until that night. In an effort to try something new, we had walked a few blocks to a nearby hotel, ridden the elevator up to the top floor and seated ourselves in their bar and waited to be served.  The view from the building was spectacular and the interior design and setup of the  top floor was just as breathtaking to look at, except that we didn’t get to experience it for long. The place had a strange aura, and we should have realized that when the elevator doors flung open and a room full of scantily dressed women and men in suits stared us up and down before we had set foot inside, that we did not belong there.

And so we left.

Riding back down the elevator, we decided to go to a familiar haunt, famous in our work circles for happy hour, casual after work get-togethers and going away parties.  Too far to walk to (for an Angeleno that is) and not interested in the hassle of one of us driving, we decided to take a cab. As we walked across the lobby of the hotel, we were happily surprised by a cab that was parked right on the curb infront of the hotel.

We climbed in and in an unfortunate twist of events, I landed in the front seat, where awkward silences ensue and even quick glances seem to be imposable. While my friends chatted in the back, I realized by the taxi license taped to the dashboard that was directly in front of me that our friendly cab driver was in fact, Armenian.

In a city with the highest Armenian population outside of Armenia and a profession that was predominantly occupied by immigrants, mostly from the Middle East, how could I not have realized that of all places, that this was going to be my fate?

When I meet other Armenians, I am not necessarily the most overjoyed person. The saturation of our ethnicity that has encapsulated my life, coupled with the negative experiences I’ve had have at times have led me to avoid Armenians. To an Armenian living in Missouri perhaps, seeing another one of their people might be the most exciting occasion, but to someone in Los Angeles, this might not always be the case.

Out of anxiety, shyness and because I was in the company of a group of friends, I stayed silent the entire five block journey to our destination. I didn’t utter one word as I shamelessly stared at his taxi license that was placed on the dashboard in front of me. My friends talked and laughed, but I was frozen. What would I say? How could I bring it up? And wasn’t it just plain weird to talk to him in front of them? We reached our familiar haunt before I could even bring it up. The toll had climbed up to about seven dollars, and as we fumbled with credit cards and the search for cash, he raised one hand up, as if to say “stop” and told us that he wasn’t going to charge us and that it was “ok.”

I was astonished. While my friends thanked him and tried to climbed out of the car, the thoughts in my head began racing and I knew it was now or never.

This question was stupid, because both him and I knew he was and he probably knew that I knew he was, but there wasn’t any other way I could think of in that frazzled moment to strike a conversation with an Armenian tax driver. He didn’t answer as soon as I had hoped, and what were mere seconds felt like long drawn out minutes. Without even looking at me, he let out a sigh, gave a tiny crooked smile and simply said, “Ayo.”

After that confusion ensued while my friends tried to crank open the sliding door and slip out.  We didn’t even have time for a short chat. The only words after that, that were exchanged were “thank you.”

The Armenian taxi driver looked tired. He looked desperate and hopeless. I thought about what type of life he might have had in Armenia before he moved to Los Angeles. Maybe he was a professor, or a writer or he might have even owned a business and now, after all those years, he had been reduced to driving around giggling and tipsy 20-somethings without making them pay for their fare. Los Angeles had chipped away what seemed like a huge part of his soul.

I felt sad. It was a basic emotion, but in that moment, I can’t really find any other words to describe it. I felt sad at his situation and I felt mad at myself, for trying to pass one of my own, unscathed. There were many thoughts running through my mind that night, and a simple after work dinner had turned into a contemplation for me. All throughout the night, my mind stayed on the Armenian taxi driver. Why did he just let us go? How come he was being so nice? Something in me made me want to track him down and give him what we owed, if only to be fair. Had he known that the shy, awkward girl sitting in the front seat was also Armenian and he had given us a discount on account of our shared ancestry?

These are questions in which the answers I will never know, but my heart ached for that cab driver that night and of all the things I could feel, I felt proud. I felt proud that this incredible generosity had been bestowed upon me and my odar friends by an Armenian. Weeks have passed by since that meeting, and every time I step outside of work, to walk around, get some tea or window gaze, I keep an eye out for the Armenian taxi driver whose kindness is etched in my mind forever.

Listen to This: Diane Minassian and Vincent Baguian’s French-Armenian Duet