By Robert Fullam December 1, 2009 in Commentary

The Half-Armenian Identity: But Your Name Is…

I have encountered the phrase “but your name is,” countless times when I meet new Armenians and non-Armenians alike. Explaining to non-Armenians that my mom is the Armenian has never been too hard but it is the conversations with Armenians that always tend to get me. Most if not all half-Armenians with an Armenian mother have encountered this. You go to a church picnic or recognize an Armenian name in school, etc and introduce yourself. Everything is going fine and then you tell them your name. They get this look on their face, of slight confusion, like they’re trying to reconcile your claim to your identity with your obviously non-Armenian surname. Repeated experiences of this situation had slowly made me feel slightly ashamed when I told Armenians my name, every time I told somebody, it felt as if all the eyes in the room were looking at me, judging me, judging if I were authentically Armenian.

I have even met some Armenians who have said they wanted to change their last name to their mother’s surname and some couples hyphenating their names so that at least the Armenian one would still be there. Armenian identity today seems to mostly be based off of a couple things, such as language, culture, religion. Culture does overlap in both language and religion though. Armenians are highly identifiable through their surnames and the most common way to meet an Armenian can be to look at their name, although Iranians also have the -ian and -yan ending. Armenians are increasingly assimilating in the United States and other parts of the world, intermarriage rates are rising and Armenians, below 10 million worldwide, are not, in my view, handling the situation of the future of Armenians properly. There are an increasing amount of half-Armenians, or to put it better, people who identify as Armenian all though they come from mixed-marriages. Even though most Armenians do not want to hear it, Armenians can be very clannish and exclusive and this has had huge repercussions on half-Armenians.

Many people might identify the kid with the last name of Bedrosian or Kazanjian as an Armenian but it is in my experience, that children with an Armenian mother, not an Armenian father, that more often than not, identify with Armenian culture and language. However, these children are not recognized as Armenian.

Even though they might speak more Armenian or know more about Armenian history, the child with the Armenian father will always be seen as more Armenian. This is not to say though, that half-Armenians through their fathers are not faced with the question of identity. The definition of Armenian identity is outdated and archaic and puts the future of Armenians at risk by ostracizing potential Armenians who have a lot to offer. Armenian identity, defined by some as being Armenian Orthodox or speaking Armenian, needs to change. Most of Armenians in Armenia, if not a large minority, identify as atheists and agnostics but if you define “Armenian-ness” through its Christian history, you are telling these Armenians, the Armenians who actually live in Armenia, that they essentially aliens in their own country. 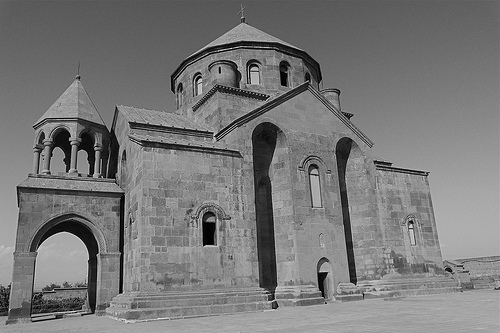 St. Hripsime Church in Echmiadzin completed in 618, is one of the oldest surviving churches in Armenia, but in 2009, Armenian identity goes beyond religion. Creative Commons/ by Rita Willaert

There are Armenian Protestants and Catholics too but they might be considered to be Armenian due to their Christian affiliation or not because they are not part of the national church. There are large numbers of Armenian Catholics in South America and Poland, do they suddenly become non-Armenians? Can we really risk losing more Armenians at this point? The Mekhitarists, a group of Catholic Armenians who settled on an island in Italy tried to reason how they could answer to the Pope in Rome but still be members of the Armenian nation. Right now we need to change how we identify being Armenian to adapt to the constantly changing world we live in. Breaking away from our old ideas of identity will not weaken the Armenian people but will instead strengthen us. I personally believe that being Armenian is not genetics and bloodlines and who your parents are. You can be born Armenian and stay Armenian and you can be born a non-Armenian and become Armenian. It’s my view that being Armenian is a way of life, certain things like language and food are always good but not always necessary. Religion is no longer the glue that used to bind us together. Things like calling close family friends aunt, uncle and cousin, insistently offering food to guests and parents attempting to keep their kids until they get to age 40 come to mind when I think of what Armenians act like.

There are plenty of other things that could be introduced as being part of Armenian identity. According to the ancient Armenian calendar, 4502 years ago the Armenian nation was founded by Hayk, the Armenian patriarch who traces his ancestry back to Noah. The Armenian Genocide has been a huge factor in Armenian identity in the modern Diaspora, so shouldn’t we do something on April 24th to remember them? Should we fast to remember how hungry our ancestors were in the deserts? Should we eat symbolic foods similar to what Jews do, remembering the Exodus during Passover? It would be interesting to argue something like this since although many Armenians in the Diaspora can trace their family to genocide survivors, not all Armenians hail from the Ottoman Empire. These are just a few ideas of what Armenian identity can encompass.

I am asking Armenians to drop the idea that there is this certain, monolithic version of Armenian history and see the realities for themselves, because only by reinventing our identity and culture will we survive as a nation.