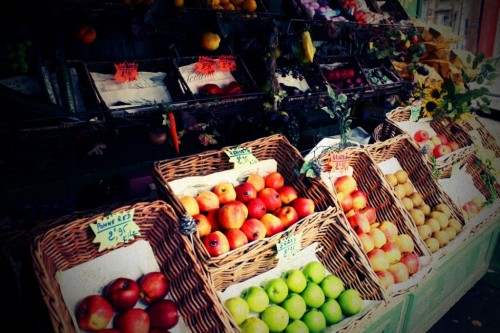 produce at a market in Montmarte, Paris © ianyanmag

For some, the 40 days of Lent, in which Christians abstain from any and all animal products is a time of spiritual reflection and cleansing. For others, including many of those who make up a new generation of Armenians, it’s a 40 day challenge to see if discipline and self control over power one’s desire to get on the kebab train. Whether your reason is religious or dietary or even just for fun, forgoing  meat, dairy, eggs might be a bit of a struggle  – or at least, that’s the way it looks on the surface. Armenian cooking is so rich in vegetables and flavor, that not only does it do well without meat, it even tastes better. Shocking right? I know. Here’s a short guide to help expand your palate to the wonderful meatless world of food.

Already a staple in Armenian diets, this filling legume can be used as a substitute for meat in dolma, rice dishes and even ground up and flavored with spices to make chee koufte (or kufta), a dish that is usually prepared with lamb or ground beef.

Tofu is an amazingly versatile component of any vegetarian and vegan diet. It lends itself perfectly to Armenian cuisine, by its ability to be cubed, friend, shredded and baked. Tempeh, which is also made from soybeans has not only a firmer texture, but contains higher protein and fiber when compared to tofu. Tempeh, which originated from Indonesia, is ideal for stew type dishes, otherwise known as “khoresht” in Persian cooking.

If you’re tired of eating rice and want to spice up your dishes, quinoa is a pleasant and fulfilling substitute. High in fiber and iron, it is also gluten-free, it can be prepared in a rice cooker. Here is a great recipe involving black beans

You might have a hard time during lent if you’re a fan of milk, but not as hard as you think. When you’re in the mood for hot chocolate, cereal or baking, soy milk is the most popular alternative to cow’s milk, but you also have options in almond milk, grain milk as well as rice milk. Not only do get the added benefit if trying new flavors, you can try them if you’re lactose intolerant or watching your cholesterol, as almond or grain milk do not contain either.

Armenians love butter. Butter in the morning, butter in pastries – you name it, and we put butter in it.  Because it is such an essential part of breakfast, butter perhaps might be the hardest food to give up during Lent. As an alternative, peanut butter, almond butter as well as sunflower butter can be used, but I urge you to try Earth Balance, which is made from natural vegetable oils.

In addition tofu, pine nuts are another alternative for use in dolma as well as salads. Chances are you have probably tasted pine nuts in sweet dishes like baklava or lady fingers, but this edible seed is a great addition to savory snacks as well.

In addition to tofu, mushrooms are a great replacement “meat.” They can also be easily used in stews, sandwiches, omelets (made with egg replaces of course) and also be filled with spinach and soy cheese for a delicious mushroom turn over.

Don’t believe what you hear – soy cheese is actually very good. Although you can definitely taste the difference between regular and soy, it will satisfy your cheese craving and perhaps win you over far after Lent is over. If you’re in the U.S., some of the best brands of soy cheese include Vegan Gourmet, Trader Joe’s sliced soy cheese alternative and Tofutti (which also sells a great ice cream). If you’re desperately missing Feta and feeling creative, you can make it yourself using tofu.

Although this list is definitely an incomplete one, it’s a great place to start. If you’re not doing Lent for religious reasons or to prove to yourself that you can, at least do it for animal welfare. Recipes, suggestions and conversation welcome.