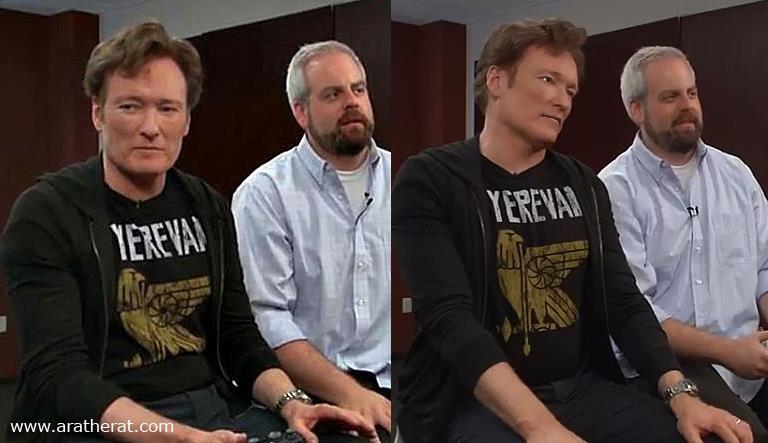 The millions of viewers who tuned into “Conan” Thursday night, the brainchild of late night television host and one time Simpsons writer Conan O’Brien, were either shocked or confused at the “Yerevan” t-shirt he wore while he played Skyrim during his comical “Clueless Gamer Review” segment.

We’re breaking the fourth wall here to tell you how the story of Conan wearing an original Yerevan t-shirt designed by our t-shirt partner Ara the Rat panned out.

It all began when the Rat received an email on Thursday afternoon from Sona Movsesian, Conan O’Brien’s assistant, who has her own solid fan base following her hilarious role in Conan’s documentary, “Conan O’Brien, Can’t Stop.” She suggested the Rat tune into the show tonight. He was left intrigued yet bewildered.

“I think you should watch Conan tonight,” the email said.

WHAT DID IT ALL MEAN?

It was on this night that he had decided, purely organically, to wear the shirt, making his Armenian audience do double takes upon seeing the words “Yerevan” on their screen. His non-Armenian audience , who probably were Googling “Yerevan” to find out if it was some new cool band or video game, were left scratching their heads too.

The rest, summed up in our report below using Storify,  is history.