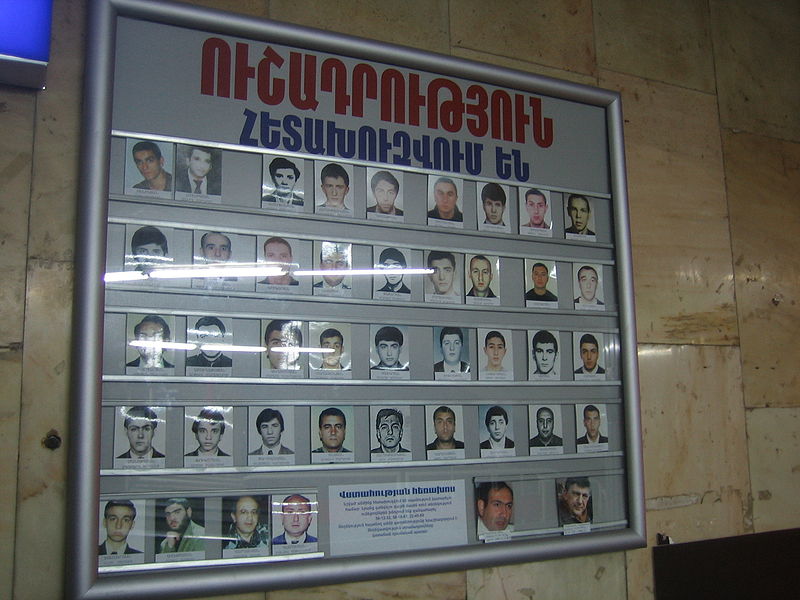 Nikol Pashinyan on a police poster in a downtown Yerevan metro station following the 2008 Armenian presidential election protests and March 1 police brutality, announcing a reward for information leading to capture of any of the fugitives listed/Wikimedia Commons/By Serouj

Five youth activists who were campaigning for political prisoner Nikol Pashinyan’s election campaign were beaten with fists and metal pipes and left with lacerations and contusions as a result, according to HIMA! youth initiative.

The five men were taken to a nearby hospital, where two men who were severely injured were transferred to another hospital. Vahagn Gevorgyan’s clothing was soaked in blood, while Sergey Gasparyan was left with a concussion, according to a report filed by A1+ news agency in Armenian, who also has eye witness quotes from Gevorgyan about how the activists were approached by a group who demanded they stop distributing fliers and then subsequently began beating them without any prior notice. It is also mentioned that the group were part of Ara Simonyan’s National Unity Party. Photos of the activists are also available at A1+.

Armenian blog Tzitzernak, condemned the beatings and cited the cooperation of international governments with Sargsyan as a cause.

“This is what happens the international community accepts and condones violent governments, and in exchange uses the illegitimacy of these governments as leverage to their own ends. Don’t get me wrong. It is not the US, or Switzerland, or Russia, or any of the others who sent their guys to beat up these youth. But these governments, and others, have accepted Sargsyan as president, and work with him. They have accepted Sargsyan, who came to power through illegitimate means, through violence, beatings, imprisonments and shootings.”

Please, don’t speak of “promoting democracy,” “human rights” and “long-term security,” when your actions and dealings as international organizations/governments actually promote powerful individuals who beat those who attempt to actually practice such principles.

Pashinyan who is campaigning for the District 10 Parliamentary position is the editor of Haykakan Zhamanak newspaper and has been charged with application of violence against law enforcement authorities and organization of mass disorders, which refer to the March 2008 protests of the election of current president Serge Sargisyan.

The identity of the assailants is currently unknown.

HIMA! also reports that a press conference will be given tomorrow to discuss the attack on the activists. This page will be updated if further reports come in.