By Guest Author October 1, 2012 in Commentary

Op-Ed: Politics of a Pardon 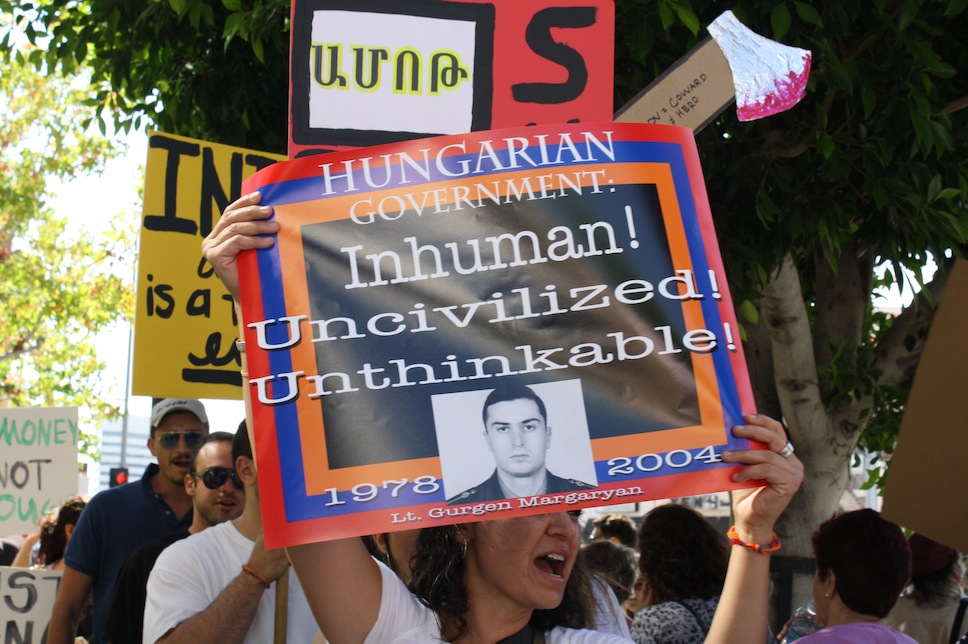 The recent extradition and subsequent pardon of Azerbaijani lieutenant Ramil Safarov sparked massive outcry across the Armenian diaspora throughout the world and even earned Budapest a spot in the Economist. The facts are simple: on February 19, 2004, Safarov, while partaking in English language courses as part of NATO’s Partnership for Peace program, axed to death one sleeping Armenian lieutenant Gurgen Margaryan with sixteen blows, nearly severing his head.

Safarov gladly accepted responsibility, and in April of 2006, was sentenced to life imprisonment without possibility of parole until 2036. Azerbaijan immediately set to work on securing Safarov’s release by establishing an Embassy in Budapest in the fall of 2004. After eight years of relentless diplomatic efforts, Azerbaijan finally convinced Budapest to extradite Safarov to Azerbaijan in exchange for guarantees that Safarov would serve at least twenty-five years of his life imprisonment sentence before being paroled. Upon arrival to Azerbaijan, Safarov was pardoned by President Ilham Aliyev, given a hero’s welcome, promoted to the rank of major, and provided with accommodations by the government.

Both the Armenian state and the worldwide Armenian Diaspora reacted immediately with fierce indignation. President Serge Sargsian suspended all relations with Hungary, raised the military’s alert level, and expressed Armenia’s readiness to repel any aggression by Azerbaijan. Across the world, Armenians protested Safarov’s extradition and pardon at Hungarian and Azerbaijani consulates and embassies. The outcry even prompted Hungarian citizens to protest their own government and to start an initiative wherein Hungarian citizens made public apologies to Armenia (and Armenians) for Safarov’s extradition. For its turn, Budapest was forced to adopt a more apologetic tone, summoning Azerbaijan’s Ambassador to explain Safarov’s pardon.

This article concerns itself with the political context of Safarov’s extradition and the Armenian nation’s reaction to Aliyev’s subsequent pardon.

First, Safarov’s extradition should serve as a stark reminder of Yerevan’s feeble diplomacy. Per news reports, the Armenian National Autonomy of Hungary apparently kept the Armenian government informed of Azerbaijan’s actions in Hungary, with repeated requests to have an Armenian Embassy established in Hungary. The Autonomy sent news to the government of Armenia of Safarov’s impending release on August 20, 2012. Sadly, not much (or at least nothing effective) seems to have been done in the interim. Safarov’s imminent extradition barely made the news around August 25, 2012 (with only a few sources writing about the imminent extradition). On August 31, 2012, it was too late. Safarov had reached Baku and was being received by Azerbaijan (with flowers to boot) as a hero. Armenians across the world woke up that day to surprising headlines too surreal to believe at first glance: the cold-blooded axe murderer who nearly severed a man’s head while he slept was free.

How did this come to be? Were warnings from Hungary ignored or not taken seriously? Or did the Sargsian administration feel powerless – – or was powerless — to do anything? Why did official Yerevan fail to inform the public – and it’s Diaspora – well in advance, a move which may have brought about massive public outcry and international pressure in time to prevent Safarov’s extradition? Perhaps the Armenian government was truly ignorant of the impending extradition? Whatever the explanations may be, Safarov’s extradition is an embarrassing failure for official Yerevan. The likelihood that it did not have sufficient notice of the imminence of Safarov’s extradition is slim. As such, its failure to take meaningful steps to stop the extradition from taking place betrays a significant collapse of Armenia’s most basic intelligence systems and speaks leaps of the shortcomings of the Ministry of Foreign Affairs. Frankly put, someone was asleep at the wheel, and it sure wasn’t Ilham Aliyev or Elmar Mammadyarov.

Nonetheless, Safarov’s pardon presents a unique opportunity for the Armenian nation to move away from its tendency to personalize regional discord and instead to engage the politically relevant factors and bodies. First, both Yerevan and the Armenian Diaspora should strain to differentiate between Hungary and Azerbaijan. In at least 20 cities around the world, including Oslo, Madrid, Buenos Aires, Kolkata, Vilnius Prague, Nicosia, Moscow, and Los Angeles, demonstrations were held outside of Hungarian Embassies and Consulates. But in only a small handful of cities- Buenos Aires, Ottawa, Los Angeles, and at most one or two more- were there demonstrations against the Azerbaijani representative; in Los Angeles, the protest was simultaneous with the protest against the Hungarian Consulate. While Hungary deserves its fair share of criticism, Azerbaijan is unquestionably responsible for freeing, literally, an axe-murderer. In fact, the disproportionality of attention given to Hungary over Azerbaijan is quite startling. Moreover, the protests have failed to clarify that it is not the Hungarian people who should be condemned, but official Budapest, a sentiment largely muffled – if not outright discarded – when the Hungarian flag was burned in Yerevan.

Most importantly, the rhetoric against Azerbaijan should be carefully crafted so as not to alienate Azerbaijani civil society and people. Aliyev’s pardon is as much an offense to the growth and development of Azerbaijani civil society, statehood, and to democratic ideals as it is an affront to Armenia and Artsakh. If anything, to the extent that Safarov’s reception fuels anti-Azerbaijani sentiment in Armenia and the Diaspora, Aliyev succeeds in shoring up popular support at home and further complicating the prospects of a peaceful resolution to the Nagorno-Kharabagh conflict. If there is going to be a peaceful resolution to the Nagorno-Kharabagh conflict, then the narrative from official Yerevan and the Armenian nation must be directed at official Baku, and not the Azerbaijani people.

The message that should come from Yerevan and its Diaspora is simple: Safarov’s pardon is as much an affront to Azerbaijani civil society and statehood as it is to Armenia and the Armenian nation. The pardon not only undermines the development of democracy in Azerbaijan, but further complicates the nation’s image abroad. Moreover, with the pardon and pedestalization of Safarov, Azerbaijan confirmed the concern of many Armenians, Armenia, and Artsakh: that is, Armenian lives will neither be valued nor protected by the Azeri state. As such, Aliyev’s actions have placed Azerbaijan at a strategic disadvantage, giving Armenia the fodder it needs to reject the possibility of resolution of the Nagorno-Kharabagh issue within the territorial integrity of Azerbaijan. Yerevan and its Diaspora should not miss this strategic opportunity to highlight the differences between the West and Baku – especially as those differences relate to ensuring the security of the inhabitants of Nagorno-Kharabagh – instead of focusing its ire against Budapest.

In short, the issue, as framed, must transcend simplistic notions of us versus them. That is, the Safarov matter should not be seen as an affirmation of hatred between Armenians and Azerbaijanis, nor should it serve to promote further dehumanization, misunderstanding, and hatred between the two peoples. Our efforts must be focused on communicating to the people of Azerbaijan that the mutual development of democratic, progressive societies where the rule of law is the highest measure of authority is in the interest of both states. Both nations and peoples must move beyond the individual antagonisms and dehumanization which are so easily manipulated by governments, and instead pursue lines of mutual understanding and collective interests.

Edgar Martirosyan is a practicing Attorney in Los Angeles, California.  Edgar received his B.A. in Political Science from UCLA, and his Juris Doctor degree from UCLA School of Law.  He is a board member with Policy Forum Armenia, and a member of the Board of Directors of ARPA Institute.

The Armenian translation of this article can be found here