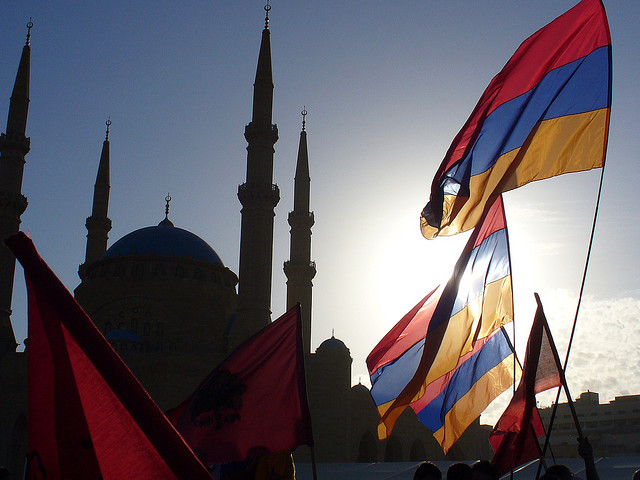 A bill has passed in France’s lower house of parliament that makes it a crime for that country’s citizens to express aloud denial of the Armenian genocide by the Ottoman Turks (the genocide occurred before and during World War I). A genocide denier will potentially face a year in jail and a $58,500 fine.

Turkey, the world’s leading Armenian genocide denier, is very alone in its view, as historians around the world have provided overwhelming proof that a genocide did occur. American travelers to Armenia during that period witnessed some of these travesties themselves, and in 1919 Theodore Roosevelt spoke of the need for payment of reparations to the people of Armenia for the “horrors” they had suffered.

As holocaust deniers are fond of doing, Turkey has claimed that the number of Armenian dead (some 1.5 million according to the scholarship; this is the number U.S. President Barack Obama uses in his annual speech on the subject) is exaggerated. And, as some Serbian nationalists like to similarly argue with regards to the Balkan Wars, many Turks say that those Armenians who perished were combatants or accidental casualties in an even-handed civil war. It’s the old, “I’m not saying it wasn’t bad; it was terrible–for all of us,” argument, which thus avoids the assigning of culpability to the far guiltier party.

Unfortunately, Armenia, a small, land-locked country with little love for or from its neighbors, has little to economically offer the outside world when compared to economic titan Turkey. Diplomatically, Turkey has become a skilled and useful middle-man in negotiations between Middle Eastern countries. I have often argued that if Turkey were admitted into the European Union (a notion French President Nicholas Sarkozy has opposed), the result might really be the best thing that ever happened in world politics.

History is written by winners, and so the Turkish perspective on the genocide, despite being outlandishly ill-supported by facts, has achieved great prominence. This drives Armenia nuts, and unfortunately sees that nation obsessing over events from a century ago, perhaps at the cost of applying positive energy in other directions that might help increase the country’s own might and thereby allow it a greater soap box to stand on.

The proposed French law is absolutely the wrong way to address these issues. First and foremost, the bill certainly restricts freedom of speech, and to say otherwise, or to attempt to justify the curtailing of free speech “in this one special case,” is to wander into dangerous territory.

Messages of solidarity to the Armenian people should be delivered by the heads of government, and not imposed as a government-mandated groupthink burden on all its citizens.

Of course, getting heads of government to do what they know is ethically correct can be frustrating. The presidents of the United States have long been cowardly in their annual addresses on Armenia’s day of remembrance. President Obama has avoided using the term “genocide” in his annual message despite a pledge that he would use the word back in the days when he sought 1.5 million Armenian-American votes (President Sarkozy, it should be noted, is pursuing 400,000 French-Armenian votes in 2012).

But to threaten imprisonment and massive fines to anyone who expresses a naive or ill-informed opinion seems another sort of cowardliness: an admission by the French government that its efforts to educate and reason with its own citizens about the Armenian genocide have ended in failure. The bill unfortunately suggests that the arguments against the genocide are so compelling that the only way to protect people from falling sway to them is to ban these opinions outright.

This is why repugnant revisionist historians, such as David Irving, who allege that the holocaust was a myth, portray themselves as free-speech martyrs. Essentially, they are. And so they take on a greater air of self-righteousness and victimhood, dangling the perfectly reasonable argument that in a free society we should be allowed to say whatever we’d like. Why hand them any sympathy at all by passing laws restricting their freedom of speech?

The fact is, I want to know if my neighbor is a Nazi sympathizer or not; at least I’d then know if I want to make his next wine and cheese and Wagner party a miss. But in passing such laws we force the ugliness of racism into the dark, dank cellar of society. There, people meet up on the internet, perhaps on the self-described “White Nationalist Community” Stormfront, far from the monitoring eyes of mainstream society, where they converse with reinforcing, like-minded individuals. They become a hidden cancer of society, unwatched and unmonitored because the laws of their own countries have removed them from public view.

As I write this from Zagreb, Croatia, I have sometimes wondered how Yugoslavian society, so unified for decades under dictator Marshal Tito, fell apart into such extremist camps over the course of a few years? Something was hidden underneath the ideological surface of “brotherhood and unity,” and finally, when the opportunity came, that concealed, centuries-long festering wound burst into a very public and pussy mess under the inflammatory stimulation of Slobodan Milošević, Radovan Karadžić, and others.

Hate and ignorance need to be out in the open, in the clear light of day, where both can be monitored, checked and, hopefully, cured via positive example from our elected officials, and, most importantly of all, education.

Back when I lived in Atlanta, I met stupid people in bars all the time (admittedly, I suppose I was always the other fellow’s stupid person). An example of a stupid person argument might be, coming from a white male: “Why can’t I use the word ‘nigger’? Black people use it in their rap lyrics all the time!”

Because we argued openly at that bar, our speech not curtailed by law, I stood a fighting chance of changing that stupid person’s mind.

Andrew Michael Kerr has written for the  Baltic Times, Balkan Insight, and Kyiv Post. He also blogs at Eurotrash or Eurotreasure? and is a DJ,  currently spinning tunes at Plan B Bar in Zagreb, Croatia.