By Nathalie Nourian March 27, 2011 in Commentary 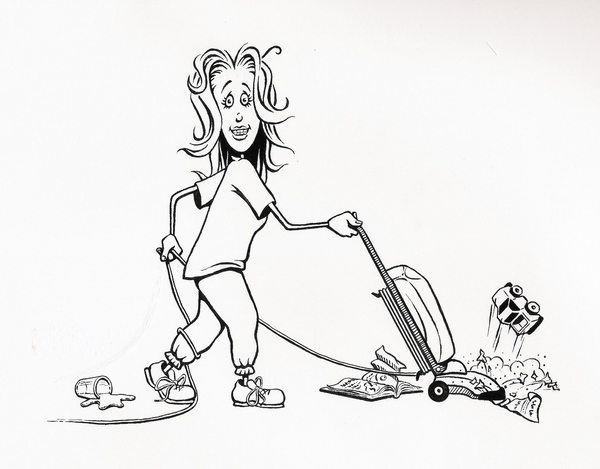 I don’t think that I’m alone in saying that Armenian mothers are a unique bunch. They are caring, nurturing and love their children with all their hearts. Well, almost. Because, you see, there is one thing that the Armenian mother holds paramount above all else, and that is cleanliness. Whoever came up with the phrase, “cleanliness is next to godliness,” had an Armenian mother in mind.

From the time that her child is old enough to comprehend the world, the Armenian mother will begin a campaign and lifelong mission to ensure that cleaning – the work of it and the art of it – are to be on top of the child’s mind, at all times. Never should a moment pass when dust is not being swept away or bleach is not whitening table linens. Never should laundry sit untouched for a few days, nor dishes soak in the sink unwashed.

However, try as they may, certain children will not be persuaded, and herein lies the foundation of the most volatile fights that will ever erupt in an Armenian household. Whereas Susie and Johnnie down the street are fighting with their parents about an early curfew, Hripsime and Hovsep are battling with their mom because they were not allowed to bring home the adorable puppy due to the mess it would inevitably create. When Betty is distraught that her mom won’t allow her to get a tattoo, Maral is upset that she was unable to bake cookies in her mother’s freshly Windexed and Pine-Soled kitchen, lest stray crumbs ruin the otherwise pristine and germ-free environment. On and on, this vicious cycle will continue, until one day the children move out, and the Armenian mother can impose her wrath of sanitation unopposed.

And while I think everyone can appreciate tidy surroundings, Armenian moms really take it to the next level, treating house cleaning like an Olympic event, jeopardizing not only their relative sanity, but also any fun or free time a given weekend may afford. Have you ever taken a moment to observe the Armenian mom when she cleans? To witness with utter shock and horror as she storms into the room at 8:30 a.m. on a Saturday morning swiping article after article of perfectly clean clothing, worn only for 15 minutes maximum the day before, to throw into a scolding hot laundry machine?

Maybe you happened to catch her perched on a chair with a dust rag in her hand and a bowl of hot soapy water on the table individually removing, washing and drying the crystals from the chandelier? Now while all of this is tolerable, albeit crazy, Armenian mothers really add insult to injury when, in a stroke of kindness, her son or daughter try to ease the burden by say, washing the dishes, or dusting the table, and she swoops in five seconds later only to redo what has just been done.
I guess what they say is true, the grass is really cleaner on the other side.