By Robert Fullam December 9, 2009 in Commentary 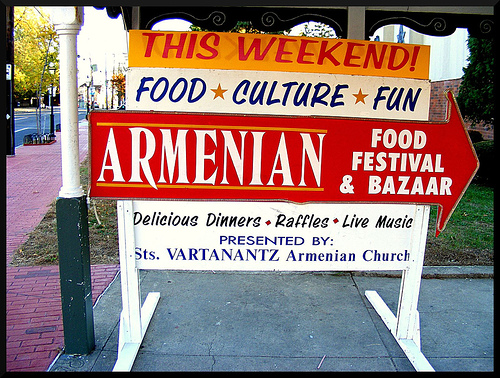 The fact that Armenian as a language, has survived under the rule of multiple empires over the centuries is a testament to the power and importance that language has in the hearts of Armenians. I was reading some articles on ArmenianWeekly.com and came across an article by Henry Astarjian, Astarjian: ‘Bazaar’ and ‘Kef’: Is our language dead? and to summarize it, Mr. Astarjian lamented to the fact that Turkish words like bazaar, kef, basturma, and soujokh were being used in place of Armenian ones and even holds that this “is tantamount to the official bastardization of the Armenian language”. I was trying to understand the thought processes of Mr. Astarjian as he wrote this piece. Anybody who has a grasp of linguistics and history understand the phenomenon that is loanwords. Armenian has been heavily influenced by Persian and Turkish as well, with loanwords coming from even Akkadian, Aramaic, and Hurrian.

It should be understood that Armenians lived under Persian rule, Ottoman rule and hosts of other empires, and acquired not just words but cultural and religious influences undoubtedly rubbed off on Armenians. Loanwords could have been taken for purposes ranging from lack of a word for something to military edict and domination. My grandmother came here in the 1950s and my grandfathers family in the 1920s, and they didn’t just speak Armenian, they also spoke Turkish. They didn’t just speak the language of their own people but that of their neighbors, colleagues and countrymen. Personally I am happy when I say I’m going to a kef or a church bazaar, I still only know how to say eggplant in Turkish, and I can swear in Turkish but not Armenian.

I am proud to be descended from Ottoman Armenians, we are our own subculture within the umbrella of Armenianness, just as Armenians in Iran or Armenians in Poland and Russia. What if Mr. Astarjian were to say that the various and countless regional dances and cuisines that also went with many dialects were too heavily influenced by outside forces and not in his view, authentically Armenian? Armenians have been changing and adapting for centuries, infusing their culture with surrounding ones, and instead of making their language obsolete and useless. The diversity in the Armenian community you see today is rooted in Armenians being able to assimilate in a way that lets local culture leech into Armenian life while still retaining the many traditions and customs that Armenians across continents continue to have in common.

To be so rigid and strict about language as Mr. Astarjian would be completely contradictory to how Armenians have been living for centuries, it would detach the historical memory of families to their lands in the Ottoman Empire, Persia, Russia, etc and erase the legacies of those Armenian communities, the ones that we look back to with pride, heartache and joy. This is why I don’t understand what Mr. Astarjian is talking about, I guess you could say he seems like he’s speaking an entirely different language.