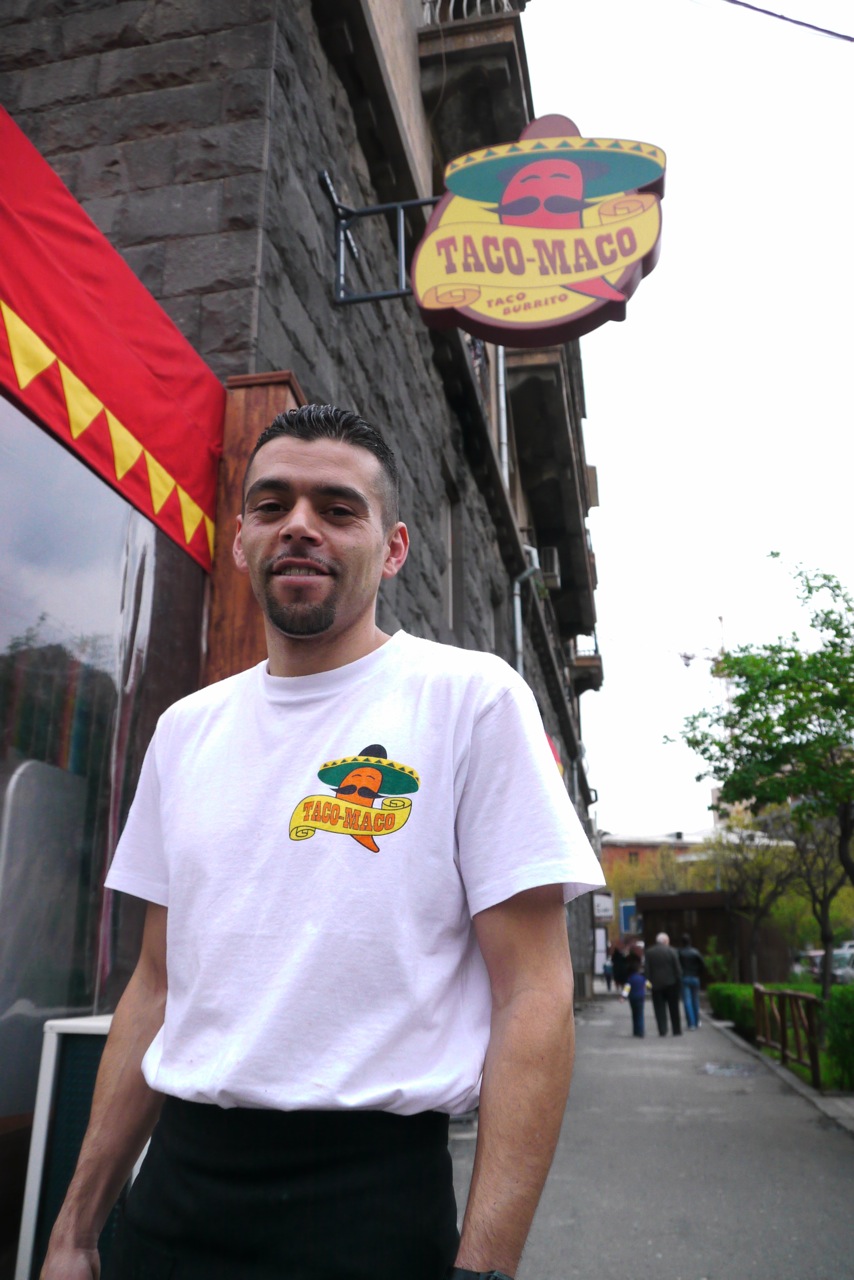 I’ve been living in Yerevan for the last four months. Originally from Los Angeles, I came here to work voluntarily through Birthright Armenia. I’ll miss a lot of things about Armenia; being surrounded by Armenian culture, my new friends, and tacos. Wait…what was that last one? Tacos? Yes tacos, something readily available in overwhelmingly delicious amounts back in Los Angeles has successfully made its way to Yerevan.

Taco-Maco made its debut in earlier this year on Marshal Baghramyan Ave. So far, everything’s been going really good according to chef and co-owner Oscar De Loza.

“We didn’t expect this much business, I mean we knew we were going to be ok, but we’re doing pretty good,” he said.

De Loza has been cooking for 17 years. He graduated with a bachelor’s degree in culinary arts, and although he has cooked all sorts of international cuisines, he specializes in Mexican Food.

“My mom and my dad have had businesses for 30 years now,” he said. “I grew up into Mexican food, it’s just what I like, and people like it. Italian food, other cuisine is more expensive. You pay a lot for something that’s not really what it is, I don’t like that.”

So how did Tacos end up in Armenia?

The legend goes that Oscar had been cooking for Tata Simonyan’s manager and his clients for the past three years. “They go to the states and do concerts every year about two or three times. And every time they go over there I cater for them and I go cook for Tata and for all the singers… So I’ve known them for about three years now… And for the past three years they’ve been insisting on me coming over here.”

The original idea for Taco-Maco was built around the traffic of tourists and volunteer workers, like myself, coming from L.A. and the United States throughout the year.

“We knew people come over here and they’re gonna want a little piece of L.A,” he said, and he was right.

There are other “Mexican” Restaurants in Yerevan, but all of them are overpriced and falsely advertised as authentic Mexican Cuisine. De Loza has done his homework. He arrived in Yerevan last August in preparation with his three business partners, one of whom is Grigor. “Going from restaurant to restaurant,“we tried all the Mexican restaurants that you have here,” he said.
And all the other restaurants to see how business was, I just didn’t wanna come over here and open a restaurant not knowing how the business was.”

What he took from observing other restaurants is the ultimate understanding that what people want is a place that has good food at low prices, and if they have those two things people are going to come and eat. “I mean for what people make here,” he says, “they can’t afford to go out to eat dinner with the family here.”

Oscar saw that people needed good food at low prices, and that’s exactly what he’s doing with Taco-Maco, but it wasn’t necessarily an easy process, for various reasons. The biggest reason being that most of the cooking supplies and most of the ingredients in the food are from outside Armenia.

“Only the rice, the beans, the lettuce, and the hamem (flavorful veggies),” he said, are from Armenia. The bigger ingredients and items are from the US and other places. For instance,legendary Tapatio Mexican hot sauce is seen on every table and Corona beer readily available for the customers. Oscar says that these elements are necessary for the authentic Mexican vibe and taste. The other partners brought a European beer on tap, but Oscar said he had it removed, mainly because it wasn’t Mexican. But Oscar doesn’t let the need for authenticity get in the way of low prices.

While observing other restaurants in Yerevan before the opening, Oscar not only found them to be ridiculously overpriced, but also completely untrue to the authentic Mexican Cuisine, and this plays a big role in the taste. “Most of the restaurants we went to that said they were Mexican food, were not authentic.” “They weren’t using the right products to make the food authentic, or close to Mexican food, and i really didn’t like the taste.” 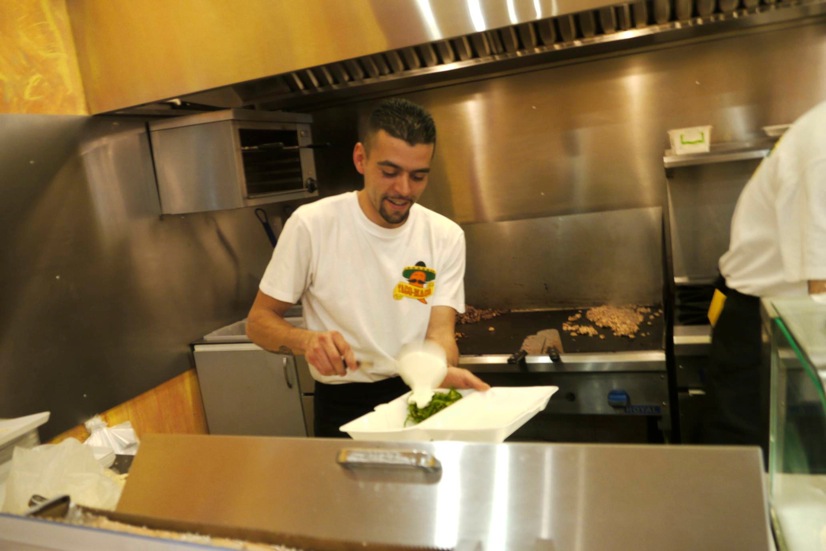 Things at Taco-Maco are always changing, a week after the interview I had with Oscar I noticed a new freshly made sauce was just made available as a menu item. The taste not only takes me back to places like Baja Fresh and Taco stands I’ve loved back home, but it easily exceeds them all in quality.

The biggest change in the ingredients is the beef he said. Because the beef in Armenia is very fresh, it usually has a certain smell to it, nothing disturbing, but as Oscar says “they probably killed the cow 2 or 3 days before you purchase it… it tastes good, it looks good, it’s very cheap, and it’s just the fact that it’s fresh.”

Also, the chicken they have for the burritos, tacos, tostadas, and quesadillas is from Brazil. And the cheddar cheese is from Germany. Oscar said he made the chicken decision (not sure what the decision is) because the chicken in Armenia is significantly different. Although, he says, “it’s more expensive, but it’s juicier, it’s more tender, more flavor(ful).” This shows what great lengths Oscar usually goes to give his customer the best without harming the low prices.

Along with the great food, De Loza has brought along with him a strong work ethic to Armenia.

“I brought my style of cooking from the states, my cleanliness, everything, “ he said “People here (are) not too focused on having everything sanitized, and I push that very very hard. I don’t want anybody to get sick; I don’t want anybody to complain about our food. I make sure the kitchen is clean, I make sure all the meat is fresh, I go shopping for all my products, I look at it, if I don’t like it I won’t buy it. Every day in the morning I wake up at 8, I go to like 10 markets just to find what I want.”

The man is part businessman, part chef, part manager, but also most importantly part dad. He currently lives in Yerevan of course, along with his wife and two boys. “My 7-year-old, he’s going to an Armenian school, he likes it. Sometimes he comes home and says he gets excluded from certain things because he doesn’t understand what they’re saying, and he’ll come home and say ‘daddy I want to go home,’ and I tell him I have the same problem at the restaurant, so just work with me, and be patient.”

It’s also been tough on his wife and 2-year-old son as well, but he’s trying to make it work. “I rented the apartment upstairs,” he said, “so they can come down or I can go up whenever I want, and I’ll be closer with them.” De Loza’s wife is also going to start co-managing with him. They’ve opened five restaurants together over the last 10 years, two of which are currently still operating in L.A., although he did close one last month due to some economic issues.

“But you win and you lose,” he said. “I mean I lost over there, but maybe I’ll gain here.” 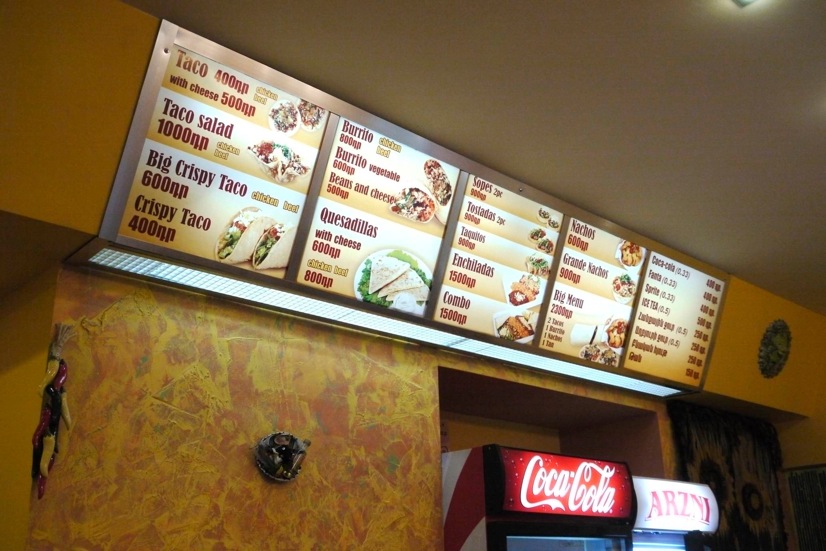 About 70 percent of Taco-Maco’s customer base is American or Armenian-American said De Loza.

“A lot of people are telling me is that when the summer comes in, ‘you’re not gonna have enough space here to serve the people,’” he said.

De Loza hopes to expand with the opening of a new location really soon, and also the addition of an extra kitchen next to the current location dedicated specifically to deliveries. “The American Embassy is really happy with us,” he said. “We cater to them two times a week, and there’s about 400 employees in there, plus their families. There’s maybe 3,000 people there,” he said, ”They come every day, every weekend they’re here, every other day they come in. I mean I’m thinking about making an embassy night so all of them can come in and I give them like a little discount”

A true chef at heart and an ideal businessman , De Loza is dedicated to the satisfaction of his customers. Did I mention the food is absolutely amazing?