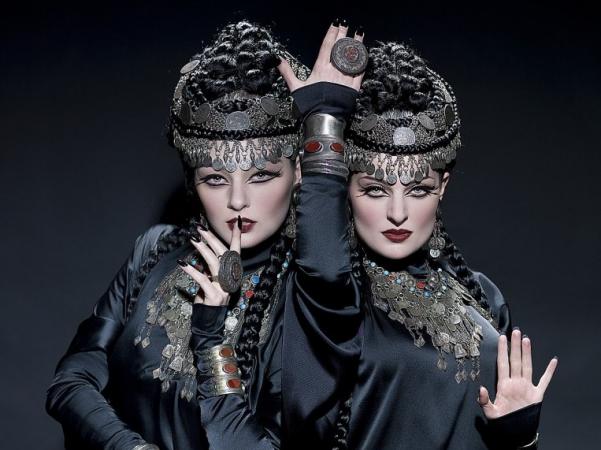 Three months ago, all the kitsch and camp musical acts Europe had to offer crowded in the Olympic Indoor Arena in Moscow, Russia for the 54th annual Eurovision competition. When the glitz and glam was over and the musical acts went back to their respective countries, taking along with them their outfits from outer space and awesomely bad lyrics, Norway took first place with Alexander Rybak’s “Fairytale,” followed by Iceland (Yohanna) and Azerbaijan (AySel and Arash) coming in second and third, respectively. It seemed as though the misty haze of Eurovision had passed, getting ready to grace us with its bombastic production in 2010.

It seemed too good to be true.

Earlier this week, word began spreading that officials in Baku had detained a number of Azerbaijanis who had voted for Inga and Anush, Armenia’s entry into the contest that placed 9th.  During the questioning, those who had voted for Armenia were accused of being “unpatriotic” and  “a potential security threat,” reports Radio Free Liberty (RFL).

“They wanted an explanation for why I voted for Armenia. They said it was a matter of national security,” Nasirli said. “They were trying to put psychological pressure on me, saying things like, ‘You have no sense of ethnic pride. How come you voted for Armenia?’ They made me write out an explanation, and then they let me go.”

Activist Avaz Hasanov called the move “unbelievable” and warned that Azerbaijan, which has already seen a steady clampdown on civil rights under President Ilham Aliyev, was moving toward a police state.

“There are no state secrets involved here. It was an open contest. It’s just people expressing their personal taste,” Hasanov said.

The RFL message board aroused quite the conversation regarding the controversy and the long standing tensions between Armenia and Azerbaijan that was for the most part respectful and thought provoking.

What would you expect from Azeris who lost 20% of their historic and internationally recognized lands to Armenian occupants and who ended up being a refugee in their own country,” wrote Bedir Memmedli. “What would you do if your neighbor takes over your property? Or, say, what should Californians do if neighboring Mexico occupies their region just because this region is home to native Mexicans? So, I don’t think you are going to forget this takeover and ask for peace. Are you? So, what in your opinion an average Azeri must do? Say thank you to Armenians and start pushing for peace?”

Another commenter who responded to Mr. Memmedli’s remarks offered a different view.

Your Mexican-American comparison is slightly off. As you might know as a result of the war of 1848, the U.S. occupied 55% of total Mexican territory, including California. Some hard feelings might still be there, but that experience also shows there is hope for peace even after 55% occupation – so 20% should not that much more difficult. I bet it will be less than 100 years when Armenia and Azerbaijan will be getting along fine.

A more close to home comparison. Turks wiped out 1/4 of the Armenian nation and expelled Armenians from 9/10 of their historic homeland, and if the recent RFERL report is to be believed less than 100 years later Turkish coast is one of Armenians’ more favorite vacation spots even in the absence of a decent Turkish apology.So I imagine there is definitely hope for Armenians and Azerbaijans to get over the past grievances, it’s just going to take time.

Of course, this wasn’t the first controversy that had clouded what is meant to be a fun and friendly musical competition. The semi-finals and finals had seen disputes about the introductory graphics of both countries, with Eurovision officials removing the  “We Are Our Mountains” image from the graphics by request, pop star Sirusho coyly holding up the photo of the statue in question during voting and the Azeri use of Iranian statues and monuments in its intro.

Journalist Onnik Krikorian commented on the Frontline Club Blog on the reasons why Azerbaijani officials would resort to such measures.

“The timing could have something to do with the release of data for televoting at the beginning of the month. Coming third in the competition as a result of votes from a jury, Azerbaijan’s entry by Aysel and Arash came second in terms of those cast by the public. Even so, it remains uncertain whether Azerbaijan will be permitted to enter the competition next year as a result of the somewhat draconian action taken against at least one of its own citizens.”

The scandal not only caused enough uproar to be covered by the BBC, but radio and television host Rachel Maddow also ran a segment about the interrogations on “The Rachel Maddow Show,” under the clever headline “Let Baijans Be Baijans.” Before commenting that the controversy would be one reason why a potential “Azerbaijani Idol” would stink, Maddow mentioned that “everything is a sore issue between these two.”

That might be true, considering the history between Armenia and Azerbaijan, however, U.S Deputy Assistant Secretary of State of European and Eurasian Affairs Matthew Bryza recently insisted that the two countries are moving closer to a framework agreement over the disputed territory of Nagorno-Karabakh. The Yerevan-based Caucasus Center for Peace Initiatives (CCPR) is also organizing an Azerbaijani film festival in Yerevan in an effort to promote reconciliation between the two countries.

Here’s to hoping this scandal is just a small blip on the radar that will be overshadowed by strong desires and efforts for mutual peace.