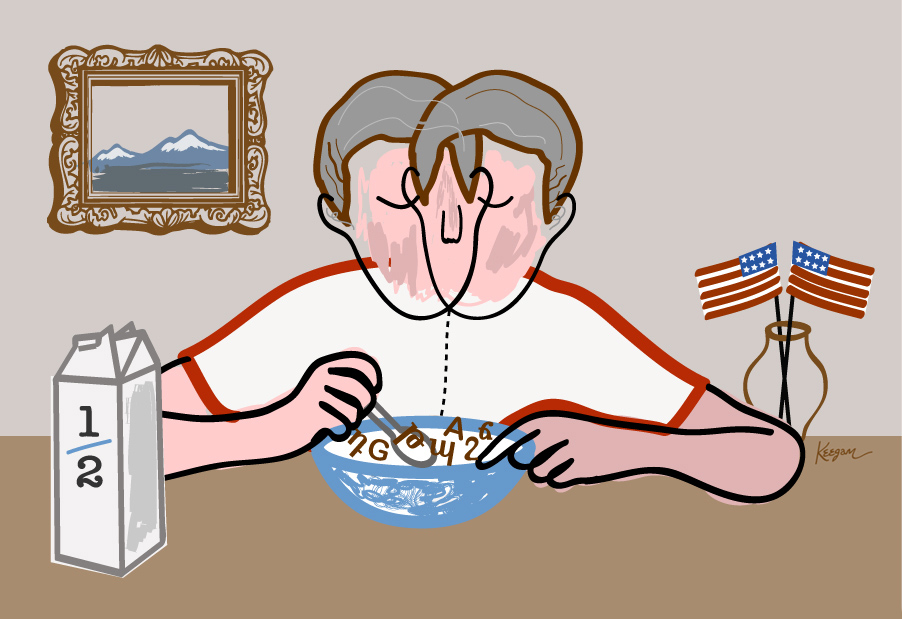 Being born half-Armenian has been one of the most rewarding parts of my life, but it’s also one that I’ve had to reconcile with. For those of us who have chosen to embrace our Armenian identities, trying to juggle it with either another ethnicity or a wider national identity has at times been a struggle. Speaking from an American standpoint, my experience might be different but not so distance from other bi-ethnic Armenians. Certainly there are cultural factors that set an Armenian‘s experience in the US apart from another country but we still experience the same dilemmas and problems. Strip away the data sets on median family incomes, demographic charts and survey results, we expose the raw and real struggles that all of us share in our quest to fit our Armenian identities in our life.

The wider community has started to soften its feelings towards those of mixed descent. Whether it’s an acceptance of cultural pluralism or a surrender to demographic advantage of bi-ethnic Armenians, there seems to be a turnaround in attitudes. When I went to ACYOA Sports Weekends, I would meet so many half-Armenians, Italian, Russian Irish, Filipino, it was a fabulous array of multiculturalism. Instead of being shy or embarrassed about it, they were proud. They have found a way to integrate their heritage, both the Armenian and non-Armenian parts. A lot of the community has grown to embrace bi-ethnic Armenians, we are passionate about our culture, we want to speak the language and learn more about the history. Still, there are some who are dismissive of those accepting Armenians who are products of mixed-marriages, holding them to unrealistic standards that are hard to meet.

Incorporating Armenian aspects into your life while most of it is spent in a society built of non-Armenian elements is a daunting task for anyone. It‘s a high maintenance operation in a world where indulging in activities that seem far more interesting is the easy way out. If you think about it, it‘s hard to sell an Armenian life as one worth working for, especially when the rewards of such a life are hard to see. While we invest much of our time and energy into our identities, is it ultimately relevant to our daily lives, is an ethnic identity necessary to function in society?

My mother is Armenian. Her family has had a strong presence in my life. I grew up with church picnics, bazaars, the hugging and kiss on each cheek, the hellos and the hour long goodbyes. I thought this was normal, until we were with my father’s family and he told me that hugging and kissing my uncles was no longer appropriate, that I was too old for it. Instead I was told to look them in the eye and give a firm handshake. I‘m not trying to say that my dad‘s Irish family‘s way of greeting was bad, but it was different, and trying to balance and reconcile two different cultural expectations was stressful.

It was hard for me to understand, why greet your relatives with handshakes, something that is reserved for strangers or acquaintances? But I slowly became accustomed to the handshake until one day, we were leaving my Uncle Ara and Aunt June’s house and my uncle came to say goodbye. I outstretched my hand as to give a handshake goodbye, and he grabbed it. I felt a jolt and started to lose my balance. Then it hit me, as if someone shoved a piece of sojouk under my nose.

He was giving me a hug.

This moment served to remind me how fast cultural subtleties could disappear without a notice. The concept of a hug was alien to me in that moment, an action my brain refused to register.
Many half-Armenians seem upset with their parents, maybe because they don’t have a recognizable Armenian surname or that they didn’t get to learn the language. A feeling of being burdened with the predicament, something their parents didn’t have the chance to experience, mainly because it wasn’t a choice.

But when you’re half-Armenian, questions arise – How do Armenians act? How do I play the part of the Armenian when I feel like I was cast for another role? One of the easiest and probably most natural reactions is to look at your family, maybe your grandparents and aunts and uncles to see how Armenians are supposed to function, or read up on the traditions and cultural oddities of Armenia itself.

Take the concept of the ideal Armenian family, with the strong father figure, flanked by his well-groomed sons and daughters and his wife by his side. His children will become lawyers and doctors and business executives. The family is tight knit, stable and protective. As I look at my own life and family, as well as those of other Armenians, I see that we have strayed from the ways of our grandparents.
Each generation, people most commonly reproduce the kinship systems and practices they are familiar with. The reproduction is never perfect, it varies from minor changes to radical ones. As I’ve grown older, I’ve noticed the disparity between the ideal family of my grandparents time and the reality of my own life. If I were to look at my mother’s family, a generation back, with her siblings and cousins, I can say with confidence that they defied every ideal trait associated with what being Armenian meant.

Drugs, divorce, and maybe the most taboo element of them all, marrying a non-Armenian. Almost all of my mother’s cousins and siblings, including herself, married out of the tribe. An entire generation of Armenians had intermarried.
Growing up though, it all seemed invisible or at least, I didn’t see anything wrong with the situation. I had always considered myself Armenian, even with my family history. It never occurred to me that we couldn’t be Armenian or weren’t good Armenians because of these things. These “moral failings” or supposed “character flaws” struck me as a human element, not the mark of a bad Armenian.

A friend once told me this: “Love is embracing the strange in another.” If we go about using this logic, then I love my family very much. We are not the model Armenian family but I grew up understanding that this was my family. . The fact is that people are flawed, there are parts of someone you cannot change. A popular depiction of Armenians is that of a people adapting, evolving, surviving and this act of embracing the strange in another is just that. The Armenian story is indeed the human story, not one of people achieving the extraordinary, but overcoming the ordinary. The problems that Armenians face are universally met by all other people: rebellious youth, intermarriage, engaging in drugs and alcohol…

Every ethnic group, every person has a story, but these are by no means exclusive, many overlapping and intersecting at curious points. I want people to approach me as I approach them, with an open mind and an open heart. Being Armenian, if only half, has taught me this lesson, that everybody has a story, and I’ve told mine. It’s up to you to decide if you want to tell yours.