The wave of stale heat hit me hard. It was reminiscent of my attic or my grandparent’s house, something quite fitting given the fact that many of the items in the store looked like they came from those exact places. Jewelry lined the display cases running with gems and birthstones of every shade surrounded by Egyptian jewelry along with terracotta and porcelain figurines. Vinyls, video cassettes, posters and paintings were also to be found bordered by a case of crystal and glassware. Looking up to the 2nd floor I can see more paintings along with rugs and furniture.

I have a soft spot for kitsch and very much enjoyed looking around but the one object that wasn’t for sale was the one that interested me most; Patricia “Pat” Bartevian, when she said “I’ve been extremely fortunate in my life to experience all these adventures.”

Pat’s father Krikor Bartev, better known as Gregory Bartevian, opened the store soon after he fled the Ottoman Empire at the turn of the 20th century. He was descended from a family of Armenian merchants from Van on his father’s side while his mother was of Persian extraction. Vera, Pat’s mother, was descended from families that first came over on the Mayflower and was a poet laureate at Oberlin College. She worked at a publishing house down the street from the Bartevian shop and after she walked by a few times and decided to come in and introduce herself; one thing led to another and she eventually married Gregory. One of Pat’s aunts suffered from polio so the family brought her to Warm Springs where none other than Franklin Delano Roosevelt was also seeking treatment, leading the families to befriend each other and leading to her aunt’s future career at the Library of Congress. 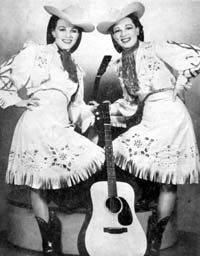 Pat and her sister Priscilla as “The Hickory Sisters”

Shortly after graduating Emerson College in 1944 with a degree in theater Pat and her sister Priscilla ran into, quite literally, an official from WEEI, a Boston radio station. It had been snowing and as she and her sister rushed to catch the train, they both slipped, sliding into the man. Seeing their guitars he asked them to come down to the station and well, you know the rest. They headed out to Hollywood and stayed for about 10 years. The two performed as The Hickory Sisters and seeing as it was World War II, they traveled the country visiting military bases and other venues singing, dancing, doing whatever they could to make ends meet. She broke out a big binder full of publicity shots, forms and newspaper clippings chronicling their time out west. There were pictures of singers like Roy Orbison watching them play and she relayed a story where Grace Kelly told her and her sister to not wear grease paint anymore. She flipped the page to stationery belonging to the Friars Club of Beverly Hills, the names of it‘s governors and officers familiar such as Frank Sinatra, Jack Benny, George Burns and Bob Hope among others.

Bartevian Inc. in Boston/ via Yelp

Eventually they returned to Boston once their father decided to hand over the store at the tender age of 100, managing it together until her sister passed away from cancer a few years ago. “If it weren’t for that cancer she’d be right here telling these stories with me,” she said bitterly. The store itself is a non-profit family trust and buys on consignment, meaning that people can come in with an item and ask her to sell it for them. “People, many eldery, need some extra money to pay for medications or groceries,” she said.

If she thinks she can sell it, she will take it and contact them once the sale is made. “When they come in for their money they will always ask if whoever bought it liked, I always say yes.”
Pat even told me that in the late 1960s, ex-mobster Whitey Bulger paid a visit to the store, not coming through the door and looking for something to buy but through the ceiling, taking bonds, jewelry and cash valued at a quarter of a million dollars. Whitey isn‘t the only Boston native with a connection to the store; Edgar Allan Poe was actually born just a few blocks over, a fact Pat says most Bostonians do not know. “He was not very well liked in the Boston literary scene, there was a lot of resentment towards him,” she said.

Sure enough Bartevian Inc. serves as the headquarters of the Edgar Allan Poe Foundation of Boston, of which Pat serves as Treasurer of. Shortly after you walk in you notice there is a shelf dedicated to Poe with soaps, graphic novels and even bobble heads for sale. Alongside these knickknacks are brochures marking points of interest regarding Poe’s tenure in Boston, his haunts, etc. There is even a statue going up a few stores down for which she is excited about, even showing me the winning statue submission of the contest the Foundation held. “It’s pretty great, it incorporates a lot of different themess from different stories,” she said. “It blew all the other submissions out of the water.” 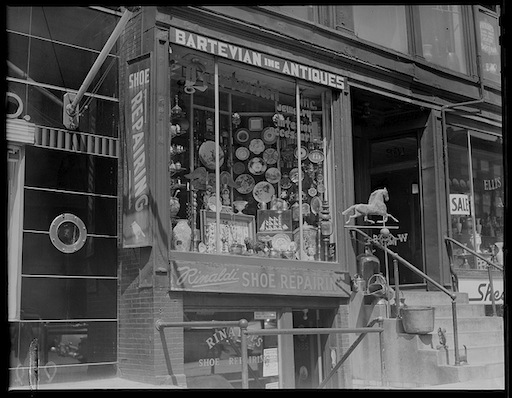 She doesn’t seem to have any reason to stop working and if she goes the way of her mother and father, who each lived to be 98 and 102 respectively, I trust she will be working at Bartevian Inc. for some time to come. There is still so much I want to ask Pat, this was just the tip of the iceberg. If you’re just as curious as I am and have time to hear some great stories, make your way down to her store, let Pat buzz you in and meet one of Boston’s hidden gems.

Watch the documentary short below to see Pat in action: