By Liana Aghajanian December 10, 2012 in Diaspora 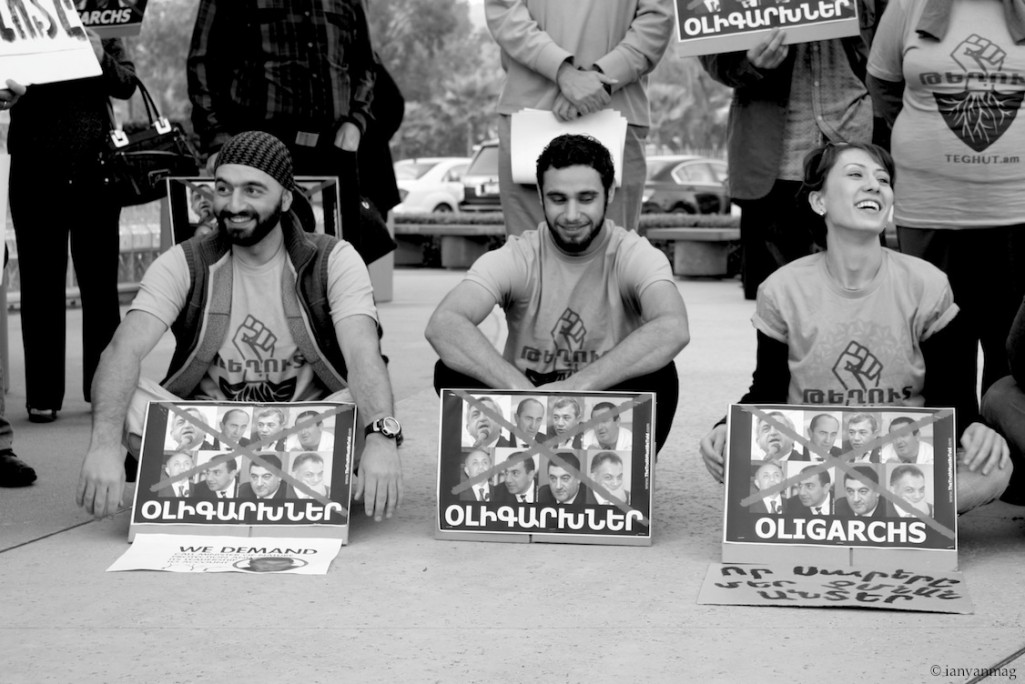 A group of Armenian-American environmental activists staged a protest against corruption and mining in Armenia outside the head quarters of the Western Diocese of the Armenian Church, St.Leon Cathedral in Burbank, as Armenian Prime Minister Tigran Sargsyan met with members of Southern California’s Armenian-American community inside on Sunday.

Holding up posters that read “Armenia is not a Mine” and “Armenia is not for Sale” along with the photos of prominent businessmen and members of parliament commonly referred to oligarchs in the South Caucasus country, the activists stood outside the hall where the meeting was taking place for hours until sunset,  occasionally singing patriotic Armenian songs and waiting to meet with Sargsyan.

The timing of Sargsyan’s visit coincided with a trip from prominent Armenian environmental activist Yeghia Nersesian, who was in Los Angeles also meeting with diasporans interested in pressing environmental matters in Armenia. He led the  group, who donned “Teghut” t-shirts  outside the church throughout the protest.

After police enforcement provided by the city of Burbank were called by security staff, Sargsyan emerged to meet the activists. Nersesian, who thanked the Prime Minister, requested that he listen to and engage in more dialogue with activists who are fighting heart and soul to protect Armenia’s environment. 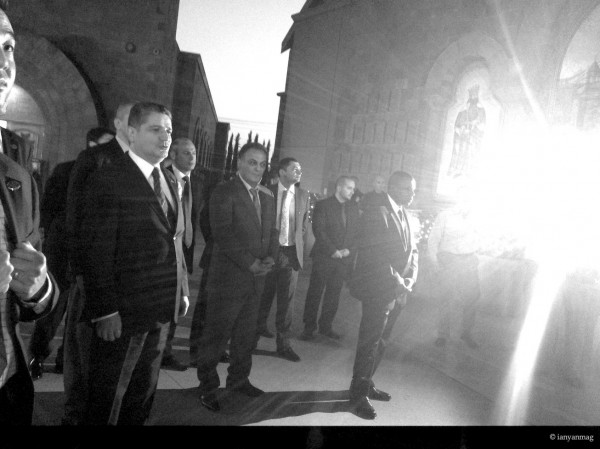 Arthur Pogosyan, a Los Angeles-area psychiatrist and co-founder of the non-profit family welfare organization Haikproject told the minister that they are not going to let Armenia be divided and exploited into parts and pieces used for mining.

“We think it’s time that we no longer let anyone harm our water and our lands, so that people have no way of living,” he said. “Is this why we fought to free our country? So that a few people can become millionaires and the rest be poisoned?”

Sargsyan expressed happiness that the environmental movement is gaining strength in both Armenia and its diaspora and said that they are more than willing to discuss and engage with activists over these issues in the near future.

Nersesian, who said he was there to create a bridge between Armenia and its diaspora said his time in Los Angeles has proven that despite the distance, the Armenian-American community has shown immense support for their cause.

“There’s a school of thought that has been strongly spread in Armenia that the diaspora is indifferent, that they can’t change anything,” he said. “But I can see a generation that puts no borders between us. They’re not with us physically, but they really are with us. They breathe and they live whatever we live.”

He also encouraged diasporans to come back to Armenia. 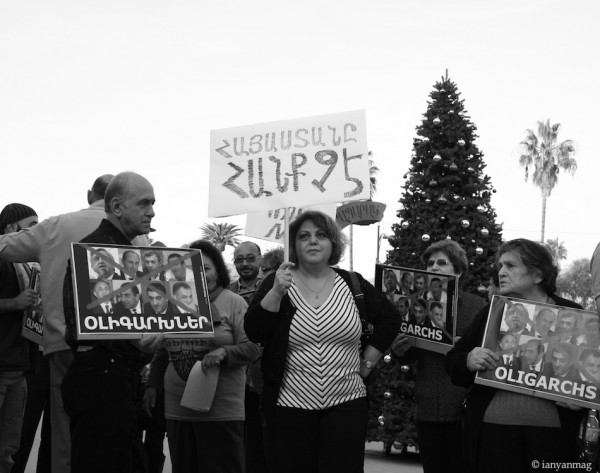 “Armenia is not a mine” reads a sign held up by a protestor./L. Aghajanian

The protest comes at a crucial time  for Armenia, who is facing a large ecological threat as its once abundant forests now only cover less than 10 percent of the entire country and its unregulated mining industry, controlled largely by foreign companies and members of parliament, threatens the country’s unique biodiversity and health of  poor, rural populations.

A main component of the activist’s agenda for years has been Teghut Forest in Armenia’s northern region, where a massive open-pit copper mine is set to be build by the Armenia Copper Program (ACP), a division of the Valex group, which is registered offshore in Lichenstein. In addition to the mine potentially destroying the region, activists say the decision to exploit the area was illegitimate and have called for lawfully prosecuting officials responsible for it.

Officials  and security staff lurked around the group, which numbered close around 20 to 30 people, and at various points said they were shaming the country and inventing narratives that didn’t exist. In response, activists called the mining situation the “Armenian reality.”

“They’re wolves,” one protestor shouted. “They are eating Armenia and drinking its blood.”

Protestors wait outside the St. Leon Cathedral in Burbank, Calif. as Prime Minister Sargsyan is inside/ L. Aghajanian

Holding up a sign with a quote from Sargsyan about the large scale emigration out of Armenia, Karen Karslyan was one of the protestors at the event. As a diasporan,  supporting activists in Armenia by staging the demonstration was important to show Armenian officials that those outside Armenia also know about the environmental issues impacting it today, he said.

“This protest is against the Armenian government that is doing nothing to save Teghut,” he said. “It’s a long term issue, because it may not have any impact right now, tomorrow or the day after, but in the long term it may be disastrous for a tiny republic like Armenia. We cannot afford to allot so many areas in our little territory  for mining.”

Toxic tailings from the mines have the potential to impact citizens who live in the country’s capital of Yerevan, but also neighboring Caucasus countries like Georgia and Azerbaijan as well, who share nearby water sources, like the Dbed river.

The local water resources will be polluted to the extent of rendering them useless, said Anne Shirin, the English language coordinator for the Green Unions of Armenia in a 2008 interview.

According to a 2010 report [PDF] released by think-tank Policy Forum Armenia, the same company spearheading the Teghut mining project, ACP has also managed a copper smelter in Alaverdi, a little less then 200 km from the country’s capital, Yerevan. The smelter, operating without sufficient safety filters had released more than 20 times more sulfuric anhydride than is legally permitted under state regulations in 2006 and 2007. Health issues like respiratory diseases were also recorded by the health ministry.

“ACP acknowledges that there will be extensive environmental damage caused by the mining process but states that the economic benefits from this mine exceed the cost of the environmental impacts,” the report says.

A protestor, who asked to remain anonymous, said he was at the protest to support two goals – the halting of mining in forested areas of Armenia and the controversial private ownership of the mines by the country’s tycoons who directly profit from them. 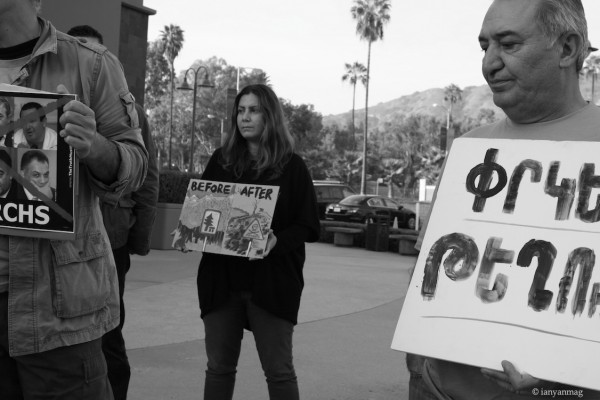 Protestors hold up illustrations depicting the depletion of Armenia’s forests due to mining/L. Aghajanian

Addressing Sargsyan and the government of Armenia, he urged the abandonment of short term profit and asked them to think about their nations future, instead.

As the sun began to set and a few more protestors trickled in, former Yerevan mayor Gagik Belgaryan who had accompanied Sargsyan on visit, appeared from the church’s meeting hall, staying several feet away from the crowd.

Belgaryan, who is infamously known for a brawl between himself and presidential staff during a Placido Domingo concert in Yerevan, slowly smoked a cigarette as Nersesian and a few others approached him for a private conversation.

Belgaryan’s brother reportedly owned boutique shops that were meant to be assembled in one of Yerevan’s last remaining green spaces, Mashtots Park before activists staged protests that halted the operation.

Activists who watched the scene unfold from afar yelled at him to put his cigarette out, citing the city of Burbank’s second hand smoke ordinance which prohibits smoking in public places, trying to send home the message that, in their city, the rule of law applies to everyone. Earlier, he had approached Nersesian to complain about his face being on the posters of oligarchs. “Your face is here because I know you as an oligarch,” Nersesian replied.

All photos © ianyanmag and should not be used without permission