By Contributor March 7, 2010 in Commentary 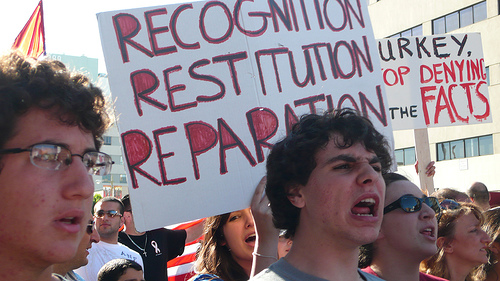 Armenian protestors at an April 24 demonstration in Los Angeles. Creative Commons/ by Poreek

By now, Armenians, Turks and those who care about foreign affairs in general have come to find out that on Thursday, the House Foreign Affairs Committee voted to recognize the mass killings of Armenians in the early 20th century as genocide.

The vote, a very narrow and nerve racking 23 to 22 was broadcast on Armenian cable channel Horizon, and also shown subsequently online.

Right after the vote, Turkey recalled its Ambassador, Namik Tan, back for consultations, Armenian publications swiftly posted the news, status updates and tweets exploded with joy and disappointment on both sides and the Obama administration, who had urged the committee to vote against the resolution, said it will seek to block the bill from coming into fruition.

Those who followed along with my live tweeting of the event were overjoyed and happy to say the least, especially after the slim margin of just one vote.

As for me, for a moment, I was shocked and surprised, although I probably shouldn’t have been. A similar resolution passed through the same committee in 2007 and was later successfully blocked from ever amounting to anything.

For a while after the vote was counted, I was in a sort of euphoric haze, not because of the actual vote, but because of what those who belonged to the committee had said along the way.

One phrase that stuck in my mind came from Representative Lynn Woosley, who represents the California’s sixth congressional district.

To deny this resolution, she said, would be to deny the lives of those who perished. “For those who say it’s not the right time,” she continued, “If not now, when? When will it be convenient. I urge my colleagues to stand up for human rights.”

Others, reaffirmed that they believe a genocide took place, but felt it wasn’t the right time, that the lives of troops would be in danger, that the possibility of  losing a key ally like Turkey wasn’t in the best interest of the U.S.

Like all other Armenians, I have grown up with stories about the genocide. Relatives from my father’s side, while crossing the Araks river to escape the killings, drowned. I’ve seen documentaries, rallies, television specials, photos, there is no doubt in my mind that a genocide occurred.

Do I think that this resolution is a good idea? I still don’t know. This post from Lena Osipova describes almost to a tee how I feel. The agenda, the goals of Diaspora Armenians, who still live in a 1915 meters deep well, as Hrant Dink said are different than Armenians in Armenia.

While we sit in free countries, in our warm houses and flashy cars in our garages, many in Armenia are still suffering from economic turmoil and poverty . There is corruption and discrimination and much more that we, thousands of miles away, have the good fortune to not see. Most diaspora Armenians have never even met a Turk, nor do they want to.  For so long, the glue that has held us all together has been the Armenian Genocide. Don’t marry odars, they tell us, we need to preserve the Armenian ethnicity. We crowd the streets in every major metropolitan city on April 24, chanting away phrases like “Dirty Turkey can’t deny/The 1915 genocide.” We don’t adapt and we don’t adopt, and in turn, Armenia suffers.

Do I need the U.S. government to recognize the genocide? Maybe, but I don’t feel any less Armenian, I don’t feel like something is missing if they don’t. My feelings could very well be the result of it not being recognized for so long, who knows.

Do I hate President Obama and think of him as a “liar” or “coward?” No, and I don’t understand the knee jerk reactions of those who do. Obama is the president of the United States and as such, he will always err on the best interests for his country, whether or not it’s “wrong” or “right.” We need to understand this. Contrary to popular belief, the interests of Armenian-Americans aren’t on his agenda at the moment, nor should they be. To think that they should, wouldn’t be realistic.

The answer still is, for me, “I don’t know.” My thoughts pull me in two directions – they tell me once that recognition might never happen, a reality that I seem to be making peace with every day, and then, they whisper to me again, telling me that this has the possibility to finally put to rest what the diaspora has been rallying around for so long.

I’m not a politician, or a historian or an analyst. I’m a journalist. And before I became a journalist, I was and still am Armenian. And I am still struggling with what the aftermath of this resolution might be, and cautiously hoping that things will turn out for the better. But what is “better?” I still don’t know.

Reflections as an Armenian Woman on International Women's Day