By Janet Kljyan September 2, 2012 in Commentary 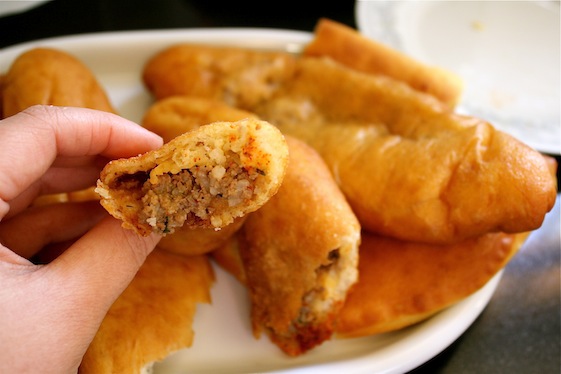 I am reminded of the time when we took our cousins from California to tour Brighton Beach—the mini-Soviet Union of Brooklyn, New York. We stopped to get piroshki (Russian fried savory doughnuts with either a potato or beef stuffing—unholy things) from a vendor on the street. I got potato of course, because a starch-stuffed oily carb is happiness in edible form. My mom got a meat perashki. We stood near the cold shore, just a big group of Armenians inhaling perashki on the boardwalk.

Then, all of a sudden, I heard voices of protest. One voice in particular: my mother’s. My mom said something along the lines of “mine has no meat.” She turned to the vendor, a middle-aged Russian woman, and asked, in Russian, где мясо? Or, where’s the meat?

I peered over her shoulder into her piroshki and, indeed, I saw no beef. She’d eaten half of the piroshki already and the unwritten rule of fried dough things is that the stuffing should show up at the latest by the half-way mark. It wasn’t there. Paying for a meat piroshki, standing in the wintery wind, and biting into the warm crispy dough with the titillating expectation that your tongue will touch caramelized onion and ground beef—and not finding any—is filthy injustice.

The vendor continued to be stubborn and my mother continued using her outdoor voice because, after all, we were outdoors. The vendor finally caved under the pressure and went to get her supervisor, a young Russian manboy with a cigarette and a face that gave way to the fact that he had never before been forced to go outdoors to smoke. My mom reiterated her complaint and the manboy, though openly annoyed, listened to her ordeal.

I stood in the background through this entire episode, eating my potato piroshki and silently concluding that it didn’t come close to the ones my mom made. I watched my mom and felt a very familiar mix of embarrassment, amusement, and admiration for her. I’ll never forget her standing there, her two hands holding open her piroshki for the world to see, and chanting the words “где мясо? где мясо?”

The manboy apologized to my mother for the meatless atrocity and asked her to please take another meat piroshki, which surely had escaped the rare negligence that had created its disastrous brother. My mother shook her head and pointed to the plate with the potato piroshkis.

She was no longer in the mood for meat.