By Contributor September 15, 2010 in Commentary

Last Friday afternoon, a quiet  storm seemed to be brewing on social networks across Armenian Diaspora. One by one, a video featuring subject matter still to this day perceived as taboo in Armenian cultural and social spectrums kept popping up on Facebook, a site which now boasts more than 500 million active users.

Armenian couple Suzy Aslanyan and Mesrop Agadzanyan (or Agajanyan) as identified by his Facebook profile went to Divorce Court, a court-themed reality show where couples present their case and duke it out in front of judge Lynn Toler. The description for the video provided by Divorce Court that sadly, doesn’t sound surprising:

Suzy says Mesrop was controlling before they wed, but he promised to change. Mesrop is upset that his wife is forgetting her Armenian roots and she knows knew his beliefs before they wed. Suzy wants to go to school and have a family later. Mesrop says it is the Armenian custom to live with the parents and have children right away. Mesrop threatens that anyone who interferes with their marriage will get knocked out and he is the man of and can do what he wants.

While the video is only accessible on Divorce Court’s Facebook page and unfortunately gives an under 2-minute glimpse into the courtroom antics of the couple, it’s truly hilarious, in that it’s actually funny all the while being cringe-worthy and embarrassing.

Choice quotes from Mesrop include “I run the show here, not you” and “Anybody gets involved, they’re gonna get knocked out.”

What is perhaps more insightful than the actual video are the comments left on it by non-Armenian and Armenian Facebook users alike.

“I can’t fault Mesrob because he is clearly confused and is marginalized,” wrote one commenter.  “His Armenian culture is in line with this marriage, but here in America he is conflicted. He is the type of man that needs to return to Armenia to find himself the proper wife.”

“First of all the guy most probably loves her to death that’s  why he just wants to protect her like there is no tomorrow,” he wrote.  “Second the wife is too stupid because she doesn’t care about …the guy and our traditions. and if you look at it, so called modern way of family fails! America has the world’s record of divorces, why is that? because its this kind of stupid girls who think they can do whatever they want. and im pretty sure Mesrop wouldn’t mind her having a good career, but why not have kids and raise a family and have career at the same time? She can’t handle it? then Mesrop is right she didn’t fulfill her promises to become a good wife.”

While I thoroughly laughed throughout the clip, shook my head and kept repeating Mesrop’s famous line, “Can’t a man get a chop!” the deeper connotations of this scene kept stirring inside me. Yes, it’s a funny Armenian cultural phenomena that had the Diaspora in giggles, yes I can take it at face value and yet the more I think about it, I just can’t. 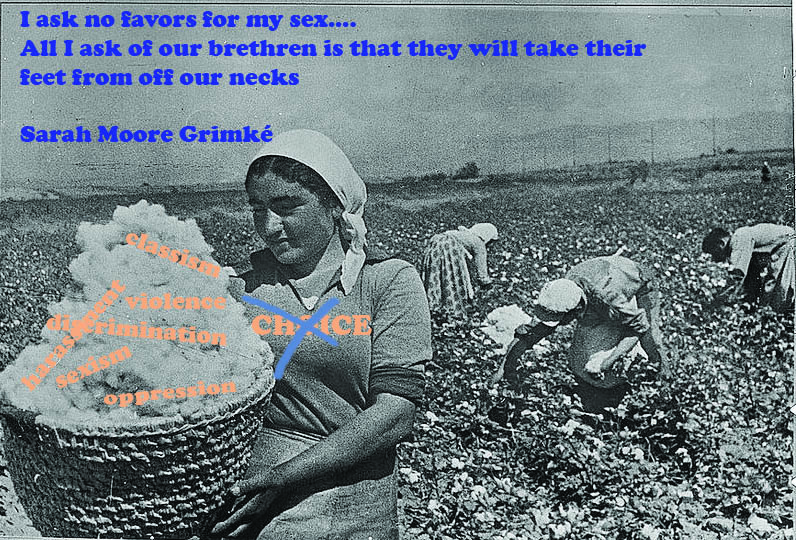 These patriarchal views of women as half-humans start with mindsets like Mesrop’s, who it is mentioned at one point, came to Suzy’s class at college, verbally assaulted the professor and physically dragged her out of the room.

And here you were, thinking that surely, these attitudes were slowly being flushed down the drain. Guess again. But what can we expect when on International Women’s Day I chose to recount experiences as an Armenian woman and almost immediately after publishing my essay, I received a comment calling me a “raving feminist” writing “mindless liberal posts.”

When Lara Aharonian, who runs the Women’s Resource Center in Yerevan  wrote a column on nationalism and sex, people began to talk about tradition and how the west has ruining the sanctity of marriage. “I prefer to live by the millenia-tested rules of Armenian family and society, than to go on some new fad (e.g. “sexual revolution) that has (pastoren) destroyed the family unit in the west,” wrote one commenter. Another even called her anti-nationalist.

Never did these commenters once stop to think of a woman as a human being with freedom of choice, since all they went on about is how the West has ruined the family. Quick! Make sure you don’t let this infectious disease known as divorce infect your family! Don’t progress – by all means please remain true to the “millenia-tested” rules of Armenian family and society, which includes such pleasant traditions as burying the red apple,  and continuing quirky little sayings like “a woman is like wool, the more you beat her, the softer she’ll be.”

They cite the staggering 50 percent divorce rates of the “West” and quote religious dogma – and guess what?

They dance around the word “amot” (shame) calling those who dare to close the gender gap and demand that women be treated as equal human beings and not objects meant to serve men like Mesrop meat and obey his laws of the land as “destroying Armenian culture and tradition.”

So eager are we to keep our roots growing, our ethnicity prospering, our ‘values’ cemented, that we fail to separate tradition from blatant human rights violations.

The country does not have specific laws against domestic violence. Most incidents are not reported to the police – and if they are, not much is done about them. The government offers little if no assistance for divorced women.

In fact, the stigma and “amot” associated with divorce is often times worse than the associations with domestic violence. 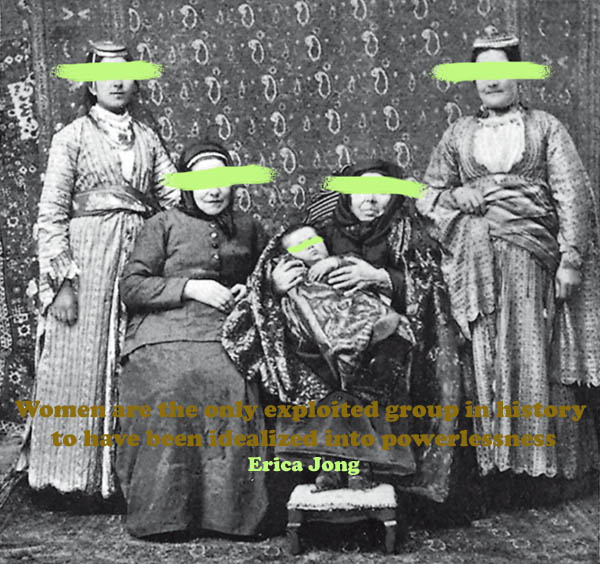 Women are the only group in history to have been idealized into powerlessness -Erica Jong. Five generations of Armenian women/Wikimedia Commons/Illustration by ianyanmag

A 2008 Amnesty International Report titled “No Pride in Silence: Domestic and Sexual Violence Against Women in Armenia”

Reporting domestic violence is regarded as “destroying the family” and is strongly stigmatized. There is little or no effective training among health workers, police, prosecutors and others who encounter domestic violence during the course of their professional work.

Take the case of Greta Baghdasaryan:

Beatings, rape and other forms of abuse became routine in Greta’s marriage. In an interview with
Amnesty International she recalled that during her pregnancy he forced her to walk a long distance without water beating her with a branch “like a cow.” She said that she suffered a miscarriage on account of these beatings. She eventually left her husband in January 2001 when he beat her severely with a shovel, breaking her nose and giving her a concussion. Her neighbour dissuaded her from calling the police and she returned to Yerevan where her parents lived. She went to a doctor, who took evidence but did not report the case to the police. Greta Baghdasaryan has been left disabled by her experiences and cannot work or provide for her children.

As a whole, the legal system focuses on persuading the victims of domestic assault to reconcile with their spouses rather than on effective prosecution of the abusers.

And while in the broader Diaspora, who live in countries that provide support to women who have experienced domestic violence and who can exercise their rights to divorce, without the shame – these mentalities, as evidenced by this video, persist in the year 2010, thousands of miles away from Armenia.

We Armenians are a funny group. We carry the world on our shoulders. We eat together, laugh together, cry together, but why can’t we stand up for basic human rights together, especially as descendants of those  who suffered discrimination and intolerance at the hands of others?

Why must we treat women as commodities and objects to be inspected, examined, given away and fulfill “traditional” duties? This is not about having or not having sex, about staying in a marriage or getting divorced, about pursuing a career or being a house wife, it’s about having the choice to do any and all of the above without fear of retaliation, abuse, poverty, discrimination and most of all shame – and until Armenian men (and women) understand this concept and more importantly – do something about it, there will be women like Suzy and Greta who experience  violence and inequality for the sake of “tradition.”

Armenians and Azeris Take a Seat to Discuss Each Other