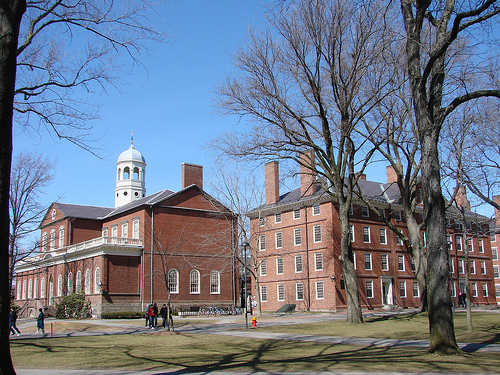 Adam Wheeler, a former Harvard student was indicted Monday for falsifying information on applications for several scholarships as well as Harvard, according to the college’s newspaper, the Harvard Crimson.  While Wheeler, 23, was indicted for 20 counts of larceny, identity fraud, falsifying an endorsement for approval to the prestigious Rhodes and Fulbright Scholarships and pretending to hold a degree, he also claimed he gave lectures for the National Association of Armenian Studies and Research at Harvard such as “From Parthia to Robin Hood: The Armenian Version of the Epic of the Blind Man’s Son (Koroghlu)” and “The Rime of the Book of the Dove: Zoroastrian Cosmology, Armenian Heresiology and the Russian Novel.” The claims appeared on a resume Wheeler sent to The New Republic magazine for an internship in their literary section.

Wheeler's resume he sent to The New Republic

All three lectures,  in fact belonged to James. R. Russell, Mashtots Professor of Armenian Studies at Harvard, with “From Parthia to Robin Hood” being the first lecture of the National Association for Armenian Studies and Research Center’s (NAASR) fall 2009 series.  “The Rime of the Book and the Dove” was also the first lecture of NAASR’s fall series, but in 2008.  His lecture, “Black Milk and the Stairway to Heaven: Bedros Tourian, Paul Celan and Anselm Kiefer” was presented in December 2008.

Russell, who has held the Mashtots Chair in Armenian Studies in the Near Eastern Languages and Civilizations Department since 1993 has taught and lectured in Armenia, India and Iran. His interest in Armenia began during a trip he took to the Soviet Union  in 1969 as a high school student, according to an interesting and insightful 2007 interview in the Jewish daily, Forward.  He was also the first undergraduate ever to major in Armenian Studies at Columbia University. Although faced with opposition from both Turks and Armenians alike, Russell’s goal is that Armenian can simply feel empowered, he said in the same interview. He’s also interested in dialogue:

“I’ve gotten some threatening letters from Turks by email,” he said. “I always answer. If they call me a name, I call them a name. Then they usually write back saying, ‘Professors shouldn’t use such language.’ And then I say, ‘I thought that’s the language you used, but if you want to speak human language here’s my home address, why don’t you come have dinner.’ Then they write back and say, ‘I’ll bring the baklava.’”

Wheeler also claimed that he spoke “Classical Armenian” or “grabar,” the oldest form of the Armenian language as well as the liturgical language of the Armenian Apostolic Church. He also said he spoke French, Old English and Old Persian.

Wheeler, who falsely received $45,000 in financial aid from Harvard, left the school after plagiarism accusations on his application for a Rhodes Scholarship. He plead “not guilty” to the charges according to his defense lawyer, Steven Sussman, as reported by the New York Times.