Following the death of painter and survivor of the S 21 prison camp Vann Nath in early September, a new generation embodied by designer and painter Em Riem is taking over.

Phnom Penh may be Cambodia’s cultural center, but decades of civil war and a regime that claimed the lives of millions left the capital seriously lacking in the art department. That is, until artist Em Riem, fresh from a newly acquired French education, returned home in 2008 and set up Gallery X Em Design.

His gallery can be found at #13 178 Street, on the other side of the Preah Norodom Boulevard, isolated from clustered galleries for tourists clustered on the other side of the street towards the Sisowath Quay. Finding this gallery is not an easy task. The somewhat fanciful numbering system, has lead some fans to search for it for more than half a day. But they’re not complaining, as the quest leads them to a gallery at the forefront of an emerging young Cambodian art scene, showcasing Em Riem’s own work as well as work from other artists who are helping him carve out a rich cultural landscape in their home country.

Em Riem is a key player in the emerging Phnom Penh movida, or scene. He’s a rising artist, however, he is much more than that. Like Armenian-born painter Arshile Gorky, also marked by genocide, Em Riem produces touching, truthful art that pulls the viewer in emotionally. His figurative series of couples who perished in the Khmer Rouge genocide is at the height of political art. While not breaking taboos, this series is very courageous in that it dares to address the genocide upfront and participates, through art, in the current efforts of the international community and Cambodia to establish truth and justice, an essential work for every community affected by injuries as serious as the crime of all crimes, genocide. 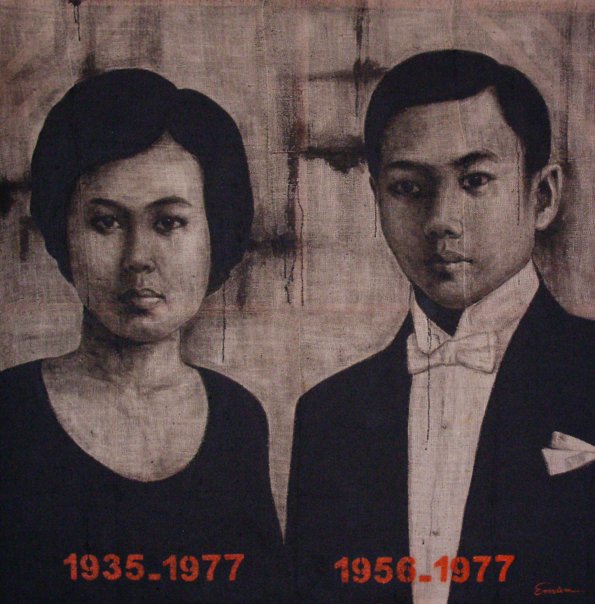 This series brings to life couples who existed in real life. Among them, a brother and a sister. All disappeared in the genocide in 1977. They are all dressed for what seems to be a special occasion, wearing Western-style outfits. Beyond clothes, all these couples have a very glaring, classic beauty. One of the women portrayed even looks like Jackie Kennedy. All these couples have been struck down in the prime of their lives.

At the bottom of each painting, the birth and death dates (1977) of each appear in a blood-red color. All of this paintings in these series are circled by blood-red beads.

With this incredible series, Em Riem reminds the world that genocide, while it is the extermination of (the envied) man by (the frustrated) man, is also the destruction of the beautiful, the sublime, and the divine in all of us. The fact that the portraits are painted on rice bags also reminds us of the terrible specificity of the Khmer Rouge genocide, making it, if possible, an even more absurd genocide than the others: a genocide that occurred within one given nation by one part of the people against another part. EM Riem throws in our faces beauty knocked down in the prime of life. He reminds us of their existence, and gives us the unique opportunity to interact and have a dialogue with these ghosts from another era, maintaining their memory forever.

This series is the most beautiful, sincere and personal monument and tribute to the Khmer Rouge genocide survivors and their descendants could expect. It is the magic answer of a brilliant artist to the somewhat necessarily heavy Tuol Sleng genocide museum and to the horrendous killing fields located in the suburbs of Phnom Penh. Em Riem reminds us that if there is such a thing as Phnom Penh movida, it can in no way rely on the mists of the oblivion of the 1970s. 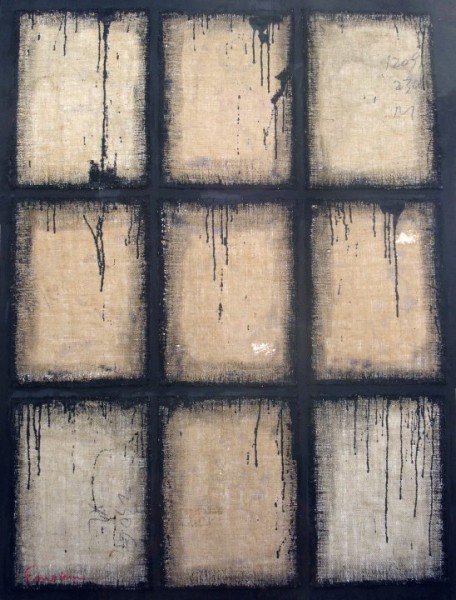 For the future to sing sustainably, Cambodia must have a memory. The country needs to remember his sons and daughters who have fallen in the Khmer Rouge killing spree. The country must have operate with truth and justice. Riem does it in his own, beautiful way. Male survivors of genocide do not usually speak about their experience of genocide. It is rare to find an artist combining both strength and sensitivity who is capable of producing a series of glaring truth, a high-water mark of free political art.

It is no coincidence that this rare artist was born in 1977, the year in which the unfortunate souls of his figurative series on genocide were killed for the simple reason of being who they were. Since then, he has painted other series. His latest to date is much more abstract. Yet, both in terms of sincerity and beauty, it is obvious that his figurative series on genocide is a source of inspiration, containing the same sensitivity and force. It includes a magic realist evocation of S 21 (Tuol Sleng), the high school turned prison, torture center, and departing point for the infamous killing fields under the supervision of the now equally infamous Kang Kek lew also known as Comrade Duch, the former leader in the Khmer Rouge Communist movement.

The butcher of Tuol Sleng was sentenced to 35 years in prison for crimes against humanity, and grave breaches of the Geneva Conventions of 1949 by the Extraordinary Chambers in the Courts of Cambodia in July 2010.

As many as 15,000 people who were incarcerated in S 21 from 1975 to 1979 were executed after having stayed there. Duch has appealed his conviction.

In this latest series by EM Riem, S 21 oozes blood and tears, like the characters in his series on couples seemed to ooze blood and tears. To the Phnom Penh visitors, the Tuol Sleng genocide museum is a must see, like Dzidzernagapert in Yerevan. While in Phnom Penh, visiting the Gallery X EM at #13 Street 178, is now also a must do.