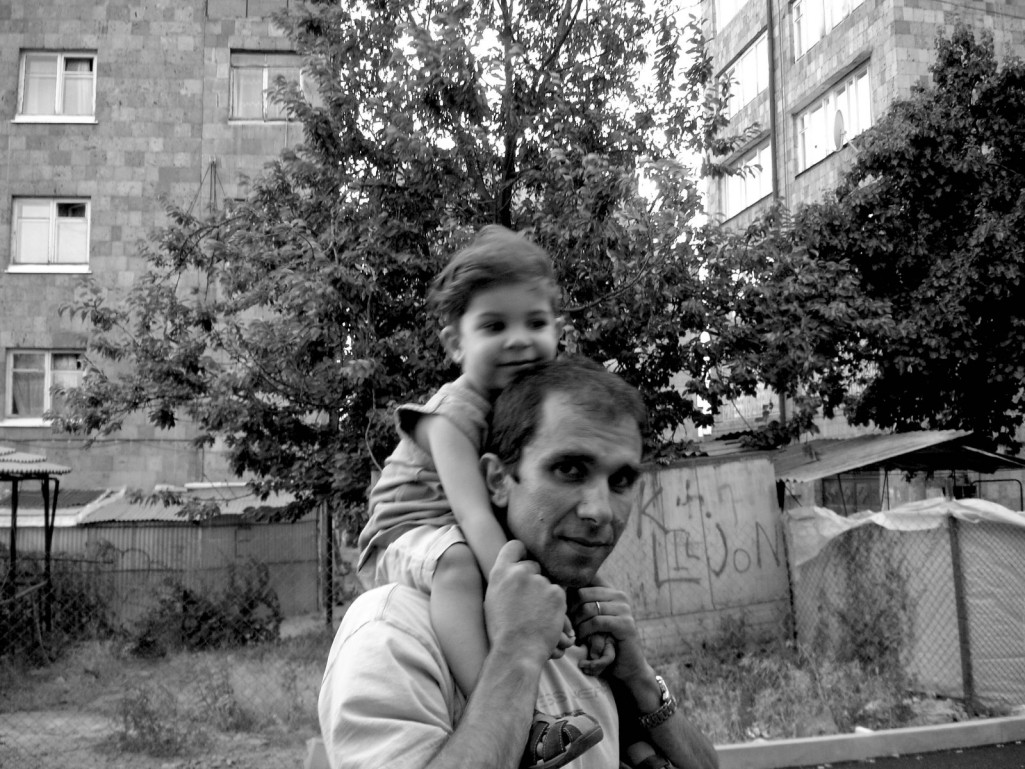 “This one is an akhbar!” the special forces unit policeman yelled out in Armenian before his buddies joined in on the beating. The term, derived from “yeghbayr,” the Armenian word for “brother,” was a particularly demeaning one, used by locals in Armenia in reference to diasporans who had repatriated in the 1940s to Soviet Armenia, a country many had never even been to before.

They beat Vicken with batons, hit him on his knees and legs, hit him on his head multiple times, kicked him on his back, punched him on his face and ribs, tore up his clothes, while shouting profanities and derogatory things about Vicken’s family and place of birth. “Էսի ձեր երկիրը չի… Սիկտիր էղեք ստուց…” (“This is not your country, get the fuck out of here”).

Mher, 20, was yanked out of the back of the same taxi by his hair by another policeman and also subjected to a beating.

After several long minutes of beating, Vicken was thrown into a police van, where he found Mher roughed up. But this was a happy moment for Vicken because he had found his son. And now father and son, and other prisoners, bleeding and humiliated, were on the floor of the police van and ordered to be quiet while officers drove them to the Zeitun police station. As bad as this was, it still was better than what 18-year-old Varant, Vicken’s other son, had experienced nine days earlier.

On the night of July 20, Vicken, Mher and Varant had joined the peaceful protesters on Khorenatsi Street in Yerevan, as a hostage crisis unfolded in the country when a group of armed men took over a police station in one of the capital’s districts. They were calmly standing far behind the police barricade, when a short time after they arrived, and without any prior warning, the police began throwing sound and flash grenades towards the people. As luck would have it, one of the first grenades exploded near Varant’s feet. Shrapnel cut through both his legs and he fell. His brother Mher and Vicken carried him to the car and drove him to the Nairi hospital emergency room. Later, Varant would undergo several hours of surgery to have some of his leg muscles reattached. Varant still can’t walk.

On July 29, as peaceful protesters reached a district of Yerevan called Sari Tagh (a community that a few days prior was a hotspot for clashes with the police over the lack basic municipal services), Vicken and Mher, who had marched with the crowd to Sari Tagh, would watch thugs throw stones towards the peaceful protestors from within the police ranks. The police would then take advantage of the commotion and again resort to sound and smoke grenades, lobbing them towards the protestors.  This is when Vicken and Mher decide to leave the area, taking refuge in the neighborhood for a short time, then get in a taxi cab to go home. 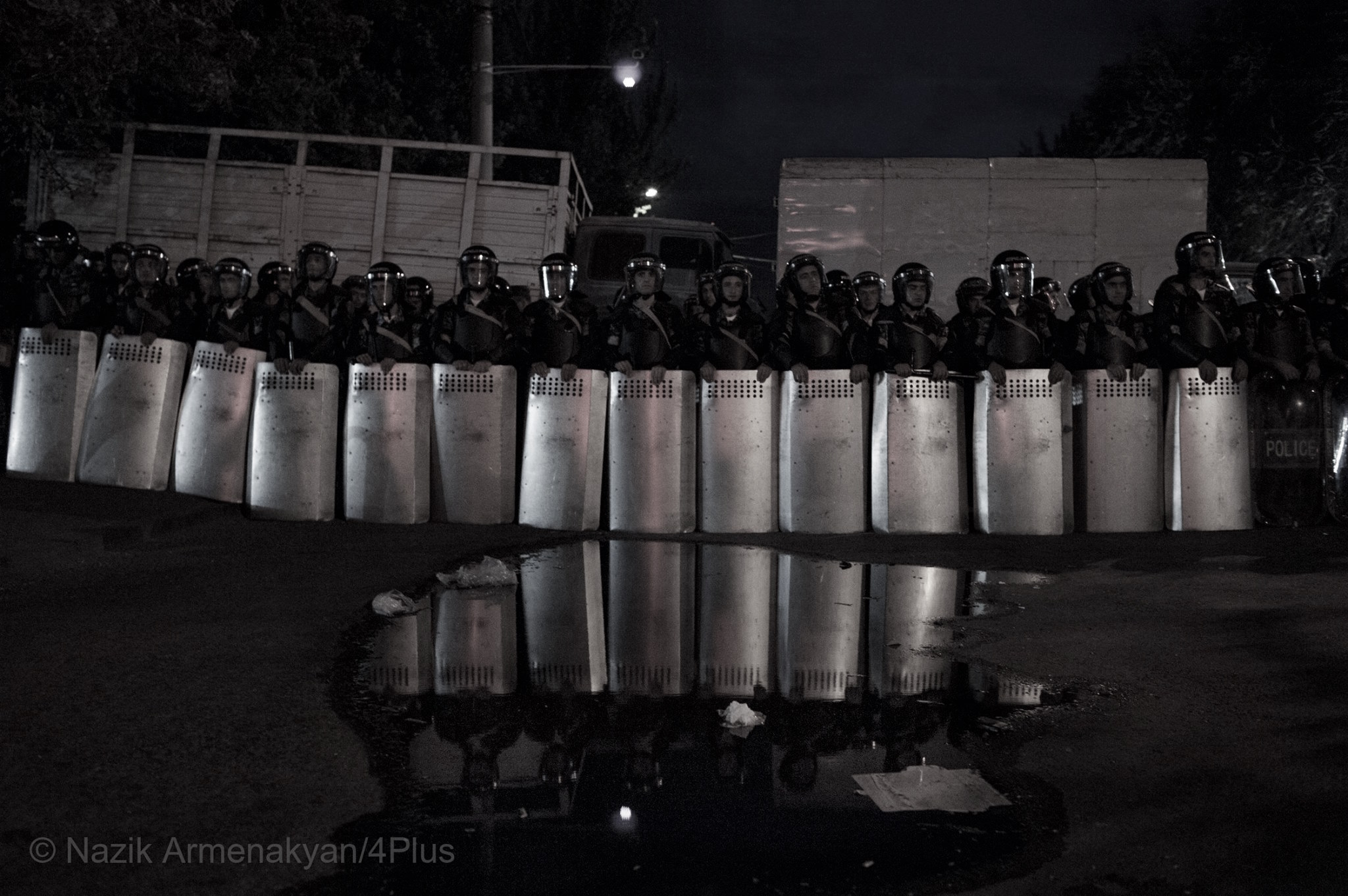 Riot police in Armenia’s capital Yerevan during a hostage crisis and subsequent protests that rocked the country this summer/ © Nazik Armenakyan, 4Plus

Along with another car in front of them, this was when they were randomly attacked and beaten by men wearing police special forces uniforms. Passengers of other cars driving in the Sari Tagh met the same fate that night.

After Vicken and Mher were transferred to the Zeitun police station, Vicken was told that he was going to be detained for up to 72 hours. In the early morning hours of Saturday, July 30, badly injured from head to toe and still wearing blood-soaked clothing, Vicken was handcuffed and taken to Abovian Prison, where he was put in a cell with another peaceful protester — a 35-year-old software engineer, also randomly pulled out of a car in Sari Tagh the night before — and allowed a half hour a day to walk around the small courtyard.

During those three days, the jailers prevented Mher from visiting his father. The prosecutors found no evidence to charge Vicken with any violation, so he was released 70 hours later from the arbitrary detention and went home to his wife, Shoghig. She now has to tend to the wounds of three men in her life: Vicken, Mher, and Varant, who needs to be propped and assisted for all his needs. The only physically unharmed man in the household is the 12-year-old Narek.

He was born in Lebanon and moved to Los Angeles when he was 18. He studied mechanical engineering and for nearly 20 years had a very successful small business in LA. During this time, he participated in all conceivable community engagements: he took part in Armenian Youth Federation activities; he was a youth counselor, he led scout camps; he supported local community organizations. Between 2001–2006, Vicken raised hundreds of thousands of dollars to support villages located on the line of contact in Armenia, including Nagorno-Karabakh or Artsakh as it is known by Armenians. All in all, he was an exemplary member of his community and a model diasporan.

But he wanted to do more: in 2005, Vicken and Shoghig, along with their three young boys repatriated to Armenia.

In Armenia, Vicken invested all his assets in businesses that created hundreds of jobs. In the process, he witnessed how unbelievably corrupt public servants are in Armenia: from the officials at the Yerevan zoning and construction offices, to the various ministries, to some of the highest offices of the land. But this didn’t deter Vicken from doing more. Once he built one of the iconic apartment buildings in Yerevan, he moved on to found a software company that employs close to a dozen people who develop a specialized software.

When the Four-Day war broke out in April 2016, Vicken called and emailed hundreds of us and begun soliciting donations to help those who were manning the front lines. He raised enough money to get more than 3,400 raincoats, more than 3,100 sleeping bags, and more than 400 tents and personally delivered them all to the those on the front lines. Vicken then spent 12 days in the trenches himself, serving those who are serving the nation. 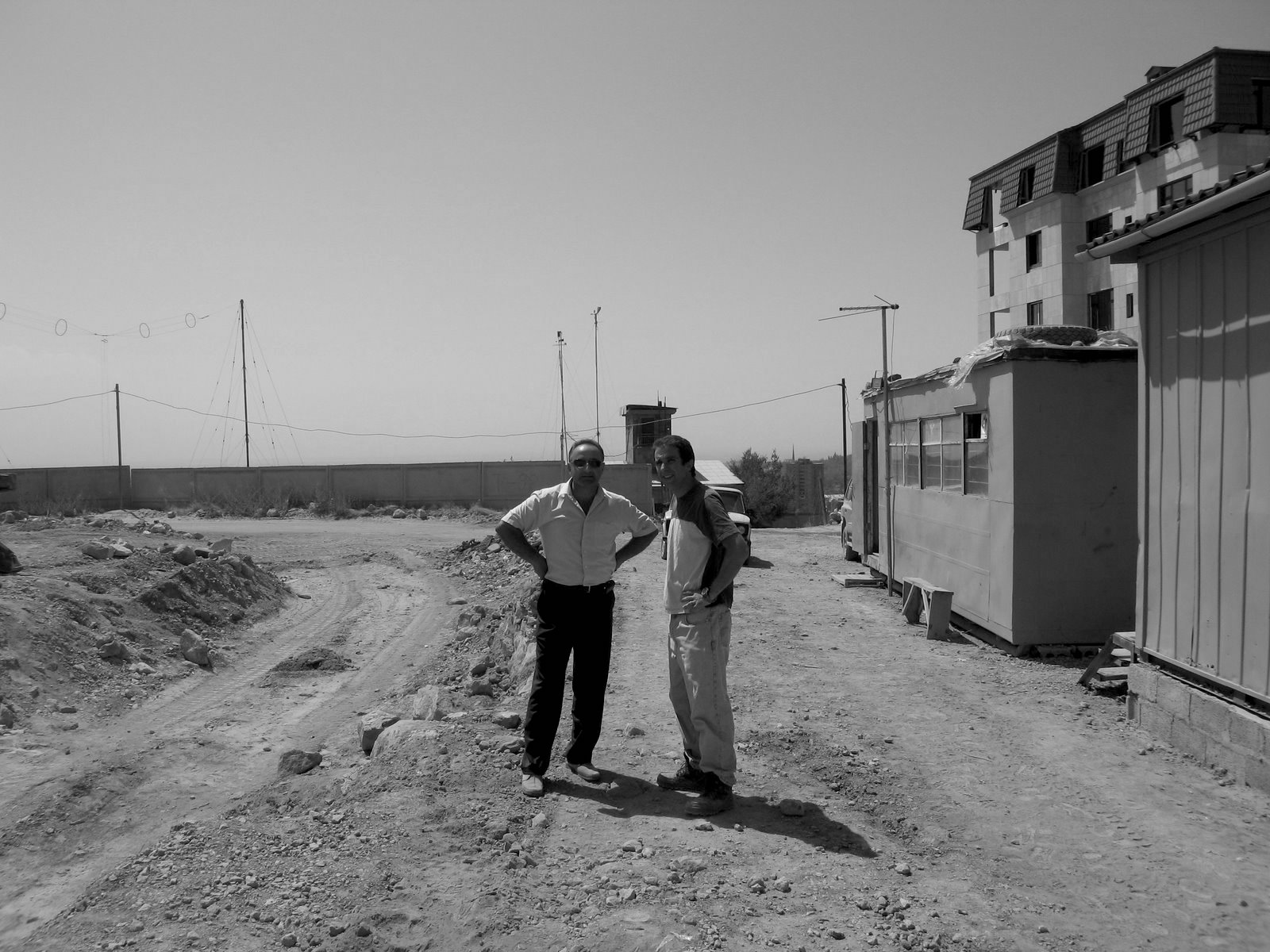 Vicken (right) at the site of the future Kayaran Residences in Yerevan, 2006/ Levon Bagramian

When the group known as Sasna Tsrer began their uprising last month, Vicken heard the news on his way back from Artsakh, on another mission involving the construction of a school and a khachkar monument park in two northern communities. Once he arrived in Yerevan, he and his sons joined the peaceful protesters on the streets.

As a kid growing up in Echmiadzin, Armenia, I hated being called an akhbar. The տեղացիք (local kids) mocked and bullied those kids whose parents had an accént when speaking Armenian. My father was born in Armenia (though his parents were from Julfa, Iran) and my mother was born in Tehran, Iran but had emigrated in 1972 to the land of “dripping honey and flowing milk.” They were հայրենադարձ — repatriates — who felt four hundred years of exile in the foreign lands of Persia were enough. Time to go home.

Surviving the yard of a large Soviet-built apartment building was tough enough, and add to it getting called an akhbar meant my childhood was constant fights and envy of the locals. They were cooler. There were many more of them.

I hated the “A” word, so I began using it. In my attempts at fitting in with the locals, I started calling a couple of kids of a particularly more marginalized repat family as akhbars. My mother had to sit down with me and explain that we too were repats. “Why are you calling those kids akhbar?” she asked me. “No, mama, they are even more akhbar,” was my response.

Back then, I didn’t want to be an akhbar.

I know the police, who beat Vicken and Mher and badly injured Varant called them akhbar to hurt them, to marginalize them. President Serzh Sargsyan – who many in and out of Armenia regard as one unworthy of the office he holds for both his elections were replete with systemic fraud –  said in his only address about the crisis, that he wouldn’t let Yerevan be turned into a Beirut, echoing, with some sophistry, the same words of the special forces police under his command that this was not their country and they should get the fuck out of here. “Էսի ձեր երկիրը չի… Սիկտիր էղեք ստուց…”

Well, I have news for him: Armenia IS the country of akhbars in the likes of Vicken, Mher and Varant, the likes of Davit Sanasaryan, Vilen Gabrielyan and Arayik Harutyunyan, the likes of Raffi Hovannisian, Zaruhi Postanjyan and Nikol Pashinyan, the likes of Jirair Sefilian and Shant Haroutunyan, the likes of every Armenian soul, whether born on Armenian soil or elsewhere, who believes in the future of our homeland and stands up firmly to protect it against those outside of her borders or within.

These and their likes are the people who will inherit Armenia. And they are the ones we are looking up to. And, no, they will not turn Yerevan into Beirut, rather they will remake Yerevan and all of Armenia, including Artsakh, into the country of our dreams, the source of our courage and the beacon of our hopes.

The era of akhbars is upon us.