Eaten in England, Germany, the U.S., Romania and more Nordic countries than you can remember – the humble gingerbread has been a winter holiday favorite, accompanying other delicacies on tables for centuries, but always standing out thanks to a delicious combination of ginger, molasses or honey.

So deeply rooted in Europe, it is perhaps odd, yet also delightful, that it was actually an Armenian monk who introduced the sweet, dark confection to the continent over one thousand years ago.

It was the year 991, when archbishop Gregory Markar traveled from Nicopolis, a city in the ancient kingdom of Pontus now located in modern day Anatolia, Turkey, after being chased out by the Persian Army. Tired and weary, he made his way across Europe, arriving in the Gâtinais, part of the Loire Valley region in France. With permission from local officials, Gregory became a hermit, choosing to live close to the Saint Martin-le-Seul church in Baudrevilliers, which was previously abandoned by Vertou monks.

According to the Logis hotel chain, which details the region’s gastronomic delights like gingerbread on their site, Gregory’s “tiny, natural cell, no larger than his body, enabled him to lead a hermit’s existence of penitence and reclusion.” Gregory lived like this for seven years, “spending his time in long contemplations, living off edible roots and wild honey,” which the region was known for.

According to the 1901 book, “A Dictionary of Miracles: Imitative, Realistic and Dogmatic” by Ebenezer Cobham Brewer, “Gregor of Armenia” fasted entirely every Monday, Wednesday, Friday and Saturday.  “On Tuesday and Thursday, he ate three ounces of food after sunset. On Sunday he did did not fast but ate very sparingly. He never ate meat or butter but his chief food was lentils, steeped in water and exposed to the heat of the sun. His rule was to eat as many as he could take up in his left hand.”

Gregory became a bit of a popular holy man in the French countryside, attracting “bourgeois and peasants alike” whom he would offer his Eastern hospitality to, “finishing the meal with a cake that he made himself, according to a recipe from his country, and comprising of honey and spices, in the fashion of his far away homeland in Armenia.”

This is recorded, according to several sources, in a 10th century manuscript from the Micy Abbey, a Benedictine monastery in the region in which it is recounted that Gregory made, by hand, cake with honey and spices, “just like in his homeland.” 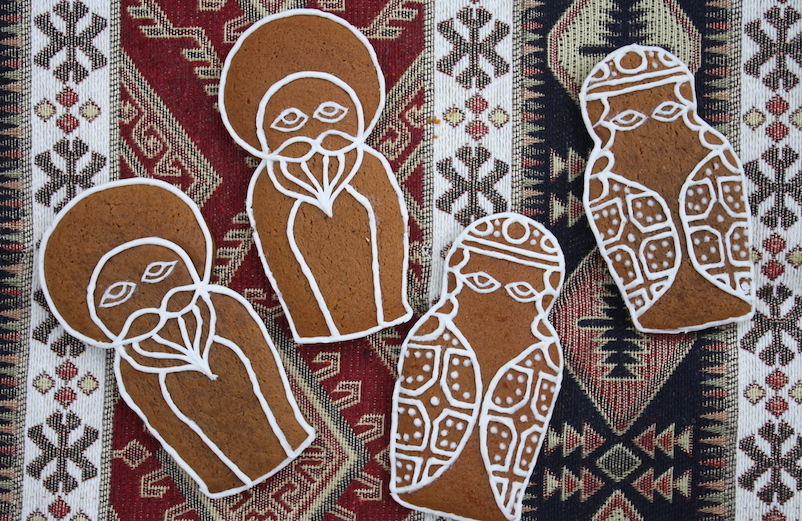 Thanks to Gregory, Pithiviers retained its rich gingerbread making tradition until this day – a “Saint Gregory of Nicopolis Gingerbread Brotherhood” or Brotherhood “du Pain d’Epices” if you’re French and fancy exists in the region, making gingerbread “according to the recipe passed down by Saint Gregory the Armenian.”

After teaching gingerbread making to the French, they in turn taught the Germans who brought it to Swedish monasteries, according to the 2010 book, “FoodFest 365!: The Officially Fun Food Holiday Cookbook” by Yvan Lemoine, who also adds that it was the “court of Queen Elizabeth responsible for creating the iconic man.” How very dainty, and also very British.

A tale about an Armenian monk traveling to France and inadvertently bringing gingerbread to the Western world was too good to just tell you about, so we decided to show you, using gingerbread baked and designed in the Ianyanmag test kitchen for a short stop-motion animation film:

Photos and video © Ianyan Mag. Please do not use photos without permission (share don’t steal)