By Alan Semerdjian January 13, 2015 in Featured

There is this idea of the way things are, and there is this other idea that things could be different. This is certainly true for free jazz, born amidst mid-20th century dissatisfaction with the conventions of bop and swing. “Free” playing in all of its embodiments is, at heart, a pure punk instinct.

The art is in the tension between what’s understood and what isn’t. For guitarist Aram Bajakian it is a way of life.

Bajakian’s newest release, “Dálava,” is not a free jazz record per se, but at times it plays like one and certainly upholds some of its most central virtues. “Dálava,” –  a collaboration with his wife vocalist Julia Úlehla –  is Bajakian’s third collection of original material and second album of 2014. The genesis for the project was unearthing a collection of Moravian folk songs Julia’s great grandfather, biologist and ethnomusicologist Dr. Vladimir Úlehla, transcribed almost a century ago. The transcriptions, which were published in a book that is virtually unknown to anyone other than Czech academics, reveal a devastatingly haunting trove of folk treasures. The words and melodies are wrought with pain and heartbreaking surreal love, indicative of the region’s torrid history. But what truly makes “Dálava” an exceptional work of art is the manner in which the material is recontextualized or “transplanted,” as Bajakian calls it. “One route would have been to recreate the folk music…but that’s kind of boring,” he tells me as we’re discussing the history of the project over coffee in the East Village. He speaks with a natural electricity that’s contagious. “There are a lot of Armenian Kef bands, but, like Zorn said, you really need to bring something new and interesting to the table.” 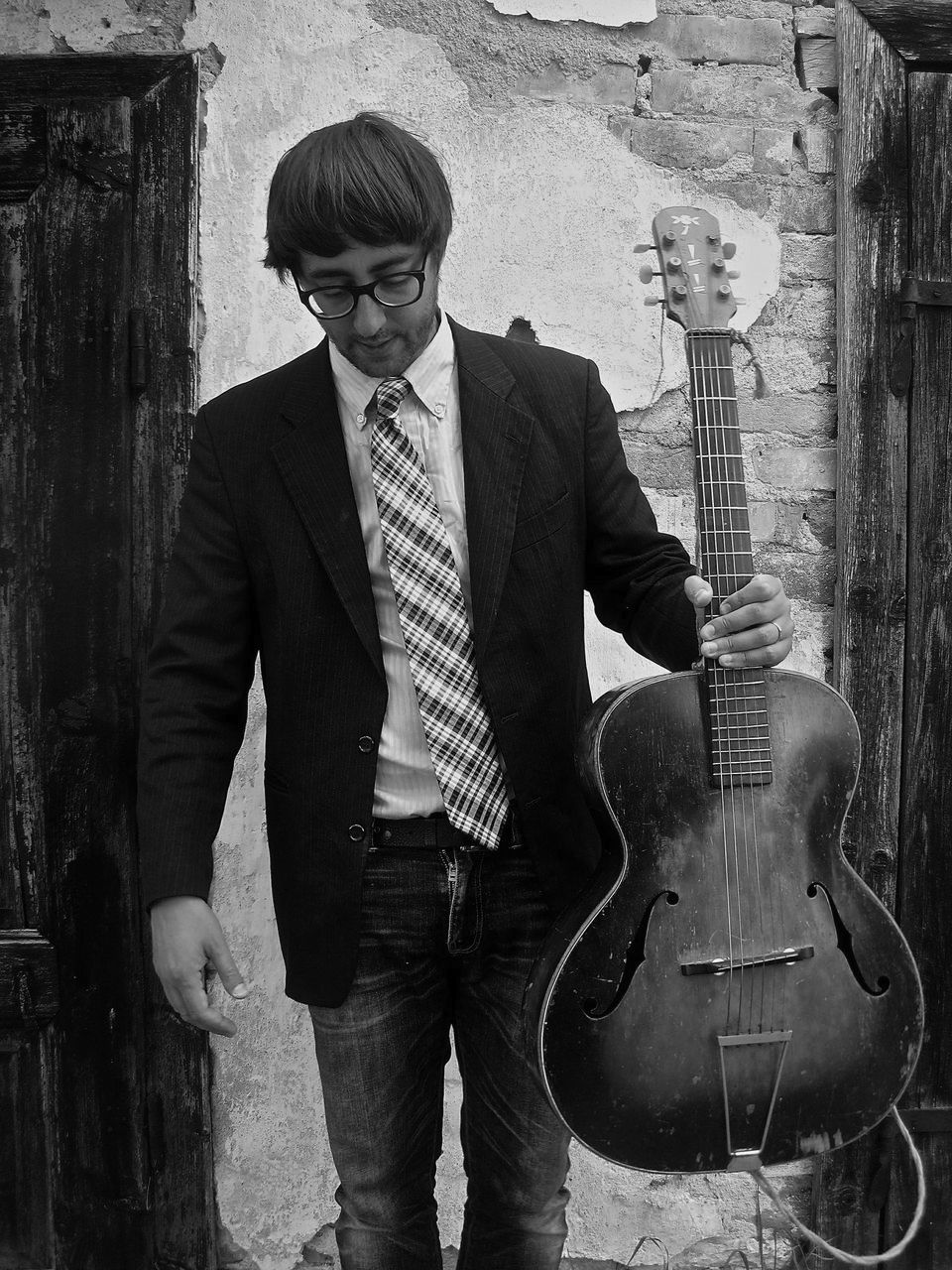 Experimentation on the album once led to Bajakian sticking bobby pins and an old business card in his guitar strings to achieve the right sound./Photo courtesy Aram Bajakian

Bajakian, who is from Massachusetts but splits time between Vancouver and New York, is referring to his first album as a solo artist, 2011’s “Kef,” which was released under avant-garde composer and producer John Zorn’s label “Tzadik.”  The thinking behind Kef was to take this tradition of Armenian party music – music he himself heard as a child at family gatherings and cast it in a new light. For Bajakian, that light was a frenetic and searing beam of noise and modern rock guitar charmed by world rhythms and rhymes. What he did to Armenian music in 2011, Bajakian did again to blues traditions with “There Were Flowers Also in Hell,” which was released earlier this year. Both collections feature pre-existing musical themes or ideas that Bajakian reconceptualizes in his own wildly experimental and highly original way. Bajakian calls his work “projects of documentation and preservation,” but I’d like to think of them as acts of transformation as well.

“Dálava” is no exception. While longing and loss are often tenets of the folk music and poetry of every culture, from the onset there’s an impassioned and distinct longing in the Úlehla’s voice that is uniquely and unapologetically transportive. At times she pleads, hushed and sullen. Other times, she erupts. Her voice is volcanic, strikingly fierce. Her singing when combined with the virtuosic musicianship of the players Bajakian assembled for the project takes us to a place that is neither here nor there, brilliantly out of time and foreign yet remarkably emotive in its immediacy and intimacy. “Dálava” is urgent music with experimentation as part of the design from the start. “We recorded the whole thing in eight hours,” Bajakian says. While the compositional elements of the songs are set, the beauty is in the coloring. Bajakian brought in some friends to provide the intuitive and free playing that, combined with Úlehla’s voice (which is remarkably assured even though it is her first time in the studio), make the transcriptions come alive.  Shanir Blumenkranz’s pulsing upright bass rhythms create the necessary insulation for the intricate architecture of Tom Swafford and Sky Steele’s respective violins.

At times, the ensemble seems to soar into collective improvisations around a theme, such as in the formidable and crushing metallic waltz of Hora Huca, and at others times it exercises the art of omission in the stark repose of Mila Ma. In between, Bajakian’s guitar acrobatically somersaults through modes and manners like a deft magician in full swing – except there is no illusion here. “Dálava” is a very real work of art that, at its best, makes us believe in the power of magic to rework meaning into legend and time. While visiting family in the Czech Republic, Bajakian and Úlehla played a show at a gallery before the album came out. “All this music sort of responds to each other…as the music gets further east – rhythmically, melodically…when we were there, people said they sang the songs differently,” Bajakian says of the trip. “Our work shines a new light on the tradition…people were genuinely appreciative, I think.”

Having sharpened his sound and toured extensively all over the world with some of the most adventurous artists of our time over the past several years including Marc Ribot, Lou Reed, and Jamaaladeen Tacuma, Bajakian has arrived himself as a visionary maker. His conviction and instincts have reaped three stellar collections of music that lift the soul and stir the imagination. “I guess I just like to take music and kind of fuck it up…in a good way…I want to do a hip hop record next,” Bajakian says before we leave, and I’m intrigued for sure. His re-appropriations have jolted traditions out of pre-established compartments and have allowed us to see history as something not fixed and dead but alive and kicking, vital, revered. I can’t think of a better purpose for art.

Alan Semerdjian is a writer, musician and educator whose poems and essays have appeared in several print and online publications and anthologies including Adbusters, Diagram, and Ararat.  He released a chapbook of poems called An Improvised Device (Lock n Load Press) in 2005 and his first full-length book In the Architecture of Bone (GenPop Books) in 2009.  His songs have appeared in television and film and charted on CMJ.  Alan has performed and read all over North America and served as a guest lecturer and workshop presenter at several universities.  He currently teaches English at Herricks High School in New Hyde Park, NY and resides in New York City’s East Village.