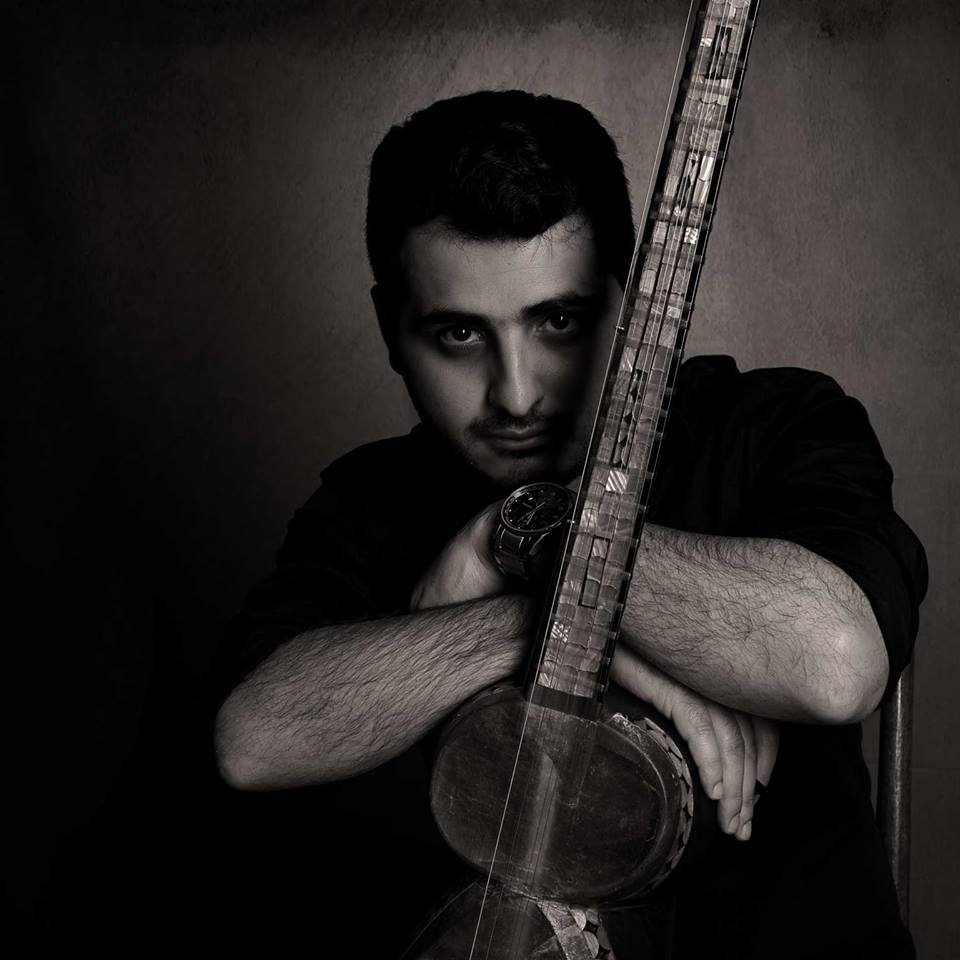 He’s having an off night.

One of the 11 metal strings on Miqayel Voskanyan’s tar has snapped just before the start of his second set at Yerevan’s Wild West club and he is struggling with pulling the replacement tight. The band has taken stage and is rolling along without him, but not for very long. He’s a master tar player after all, and nothing will get in the way of his music, especially a pesky string.

The music that his band Miqayel & Friends performs is indescribable in one or even a few words. It is not straight ahead jazz or rock, rather sort of an ambiguous melding of the two genres, and he admits that it is hard to classify. It’s his very intention to present the music in such a way that anyone can find their own preferred style in his own.

Voskanyan’s harmonies are intricate and interwoven, performed with a constant, rapid plucking, as if he is passionately making love to his instrument. There is an intense, undeniable passion coming forth during his performances.

The tar is played in Iran and in the Caucasus, namely Armenia and Azerbaijan. The Persian tar differs from the Caucasian type in its shape and number of strings. Both are made from mulberry wood, and between 400,000 and 500,000 strikes are needed to shape a tar the traditional way. New instruments can still be found.

Although the instrument’s exact origins are still unknown, there are references to the tar in Armenian historical records dating to the 9th century. The strings are made of metal, and the membrane that stretches across the figure eight-shaped body of the Armenian tar is actually the sac that surrounds the heart of a cow. Centuries ago melodies played from the tar were known to have been used for treating depression and other ailments.

Voskanyan’s instrument is 100 years old. He explained that the more often it is played the better it sounds. The membrane has to be replaced usually every year. He takes his instrument to a tar maker, who are becoming increasingly hard to find. He says it’s hard to both play and work on the tar since the jobs are so specialized–a person can do only one or the other. But he has hopes that the younger generation will learn to become expert tar makers.

Voskanyan’s musical career began at the age of six, when he learned to sing various folk songs. He’s been playing the tar for 18 years, always with the desire to play folk music.

“I picked the tar over the kamancha since it interested me more,” he said. “I felt closest to the tar.”
He says that of all the folk instruments used in Armenian music the tar is considered more professional, while others, like the kamancha–a stringed instrument played with a bow sporting a gourd-like body supported on the knee–are more romantic.

Tar playing runs in the family blood. His maternal great grandfather named Sarkis, from Armenia’s northern Tavush region, played in the 1920s and 1930s and had quite a reputation. For that reason they were known as the Tarchunts clan. He found out about his great grandfather only after he chose the instrument.

Voskanyan attended music school for seven years, graduating in 2003. In the following year, he began his studies at Yerevan State University, majoring in art history. He subsequently joined the State Ensemble of the Folk Musical Instruments of Armenia as first tarist. During his tenure with them he matured as a composer.

He also was featured in a band called Colors of Music, consisting of 12 members, all students from the music conservatory. But the group faced various financial and technical issues commonly related to large ensembles and it folded.

He has performed in such countries as Egypt, Sweden, Georgia, Russia and Finland, where his acoustic project called Voices For Peace played a concert.

Miqayel can also play the oud, but not like a professional. He has also experimented the saz and guitar.
When he plays the tar very fast, which is a commonly accepted practice, the performance sounds reminiscent of a taksim, the fast improvisational playing adopted by oud masters, but it is not intentional, he says.

He has another undertaking he calls a “mixed art project,” combining tar with acoustic guitar and cello, playing infrequently. They perform his own compositions as well as national folk songs along with music attributed to Komitas, with new arrangements.

He describes his music as “ethnic jazz” or “folk fusion,” two monikers being used today to classify the commingling of folk and jazz. Then he started to study classical music and jazz, from mainstream to free–John Coltrane, Herbie Hancock, Michel Petrucciani, Weather Report, Miles Davis and Mike Stern he sites as influences. He is also crazy about Beethoven, especially the symphonies, and appreciates Mozart, Tchaikovsky and Stravinsky.

He believes it is very important for a musician to listen to melodies from other nations and to discover how and why music evolved the way it did.

“All kinds of music styles can be found in classic jazz due to improvisation–while you’re playing you’re inventing things off the top of your head and thus composing, and that helps you create,” he said.

For him improvisation in music is a natural process, and he has been improvising for five to six years. He has participated in jazz jam sessions–at first he was timid but he worked hard to make it sound proper. He once had the pleasure of playing with Vahakn Hayrapetyan and Arto Tunçboyacıyan.

Voskanyan cites music of other cultures, such as Indian and Persian, as having an impact on his own, and he also acknowledges a Latin influence. Arabic taksims and music from African nations have made a lasting impression on him. 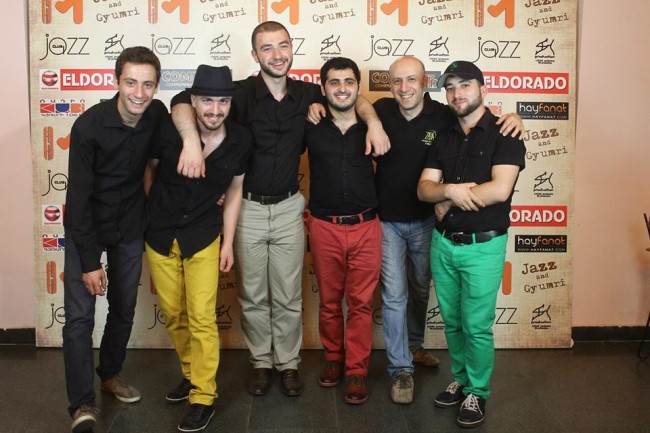 Miqayel & Friends took shape in 2010 when they gave occasional concerts. He was once asked to play one of his own compositions and he invited some friends to accompany him. That venture evolved into a band, and they played their first concert on March 16, 2012 under the current name that stuck. The band members include David Melkonyan, alto saxophone; Arman Peshtmaljian, keyboards; Gurgen Ebejyan, bass; Movses Ebejyan, drums; and Eduard Harutyunyan, percussion.

One of Voskayan’s main goals in performing the tar is to promote it, both internationally and especially in Armenia where many, especially the youth, can’t tell it apart from a kamancha. He wants to make Armenian folk instruments accessible to the youth by playing the tar in such a way that will gain rightful appreciation. Armenian folk music has not really evolved in the last 50 years or so, and as a result the genre has earned a predictable, retro flair. And not everyone wants to hear that.

“Armenian classical music has nowhere to transform,” Voskayan said. “You need to play in a style that always promotes room for development, that will never grow old. New national compositions are necessary to help make that happen.
“Everything has to have its time. The melodies have to remain, they’re important, but the way in which they are presented and performed has to change.”

Voskanyan wants to start recording an album but needs financial backing and a producer to make that happen. In the mean time he is trying to raise the funds on his own to begin. Many fans ask for a compact disc at the end of a show.
“The time has come for us to have a recording,” he said.

There perhaps isn’t a club in Yerevan in which the band hasn’t performed. They are limited to playing the same venues repeatedly due to limited scope and appeal. Voskanyan wants the band to participate in international festivals. Most recently they entered the Made in New York Jazz Competition, which allows people to vote for their favorite act online. The winner will be announced in September and perform in the New York City Jazz Festival.

In the meantime, the band will keep performing every chance it gets. The next gig will be at Yerevan’s Cascade on July 20.
“If you’re a musician, you must play for an audience,” he believes. “You can’t stay away from performing. You also have to play a kind of music that will cater to the aesthetic tastes of the listener.”

Watch Miqayel Voskanyan perform “Lusine” on the tar below: