By Liana Aghajanian January 19, 2010 in Commentary 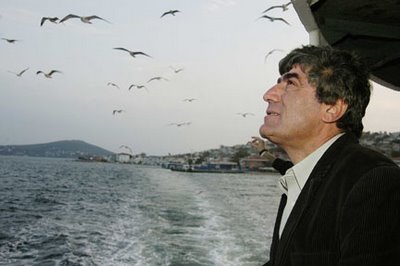 Three years ago today, Hrant Dink was brutally gunned down near the headquarters of his Turkish Armenian newspaper Agos by a 17-year-old Turkish nationalist. As any Diasporan can attest to, it’s very easy to be so unaware of what is going on outside the bubble of your adopted homeland, thousands of miles away from where you originated from.  When Hrant Dink died, I was a wide-eyed journalism student who had just recently become acquainted with him, a man with ideals I felt I had been searching for for so many years, a man who I felt somehow managed to extract the thoughts I had in my head and form the most eloquent, admirable and respectable sayings and speeches, a man who didn’t have an agenda, who wasn’t blinded by ulterior motives or fanaticism. When Hrant Dink died, a part of me died.

To put it in the most understandable of terms, Hrant Dink was the Armenian equivalent of Martin Luther King Jr. He strongly held on to his unconventional beliefs and made no apologies for them. He was someone who understood that  communication was the only way to understanding and peace. He was the one who poignantly declared that “Turkish-Armenian relations should be taken out of a 1915 meters-deep well.”

He, unlike a majority of Diasporans lived and breathed and worked among Turks. Here was a man who tried to bridge the gap between two groups with an unfortunate history, a man who suggested that diaspora Armenians free themselves of the deep seated hatred against Turks without never stopping to fight for  human and minority rights. To Dink, hatred and violence were not synonymous with recognizing discrimination. To him, they were counterproductive to it all.

Though he had critics, one only has to look as far as his funeral, in which two hundred thousand people marched in protest of his assassination chanting “We are all Hrant Drink” to see the amazing impact he made on both Armenians and Turks. This alone should be enough for both sides to understand that in order to succeed, you need to climb out of the aforementioned well.

At the time, Joel Simon, the Executive Director of the Committee to Protect Journalists said that one of Turkey’s most courageous voices had been silenced. Hrant Dink died three years ago and a part of me died. After much reflection, I brought that part back to life again and I would be lying if I said that the man who risked his life to bring about change did not have a hand in convincing me to finally start this site which you are reading now.

Last year on the anniversary of his death, a campaign was started to show support for Dink by declaring “I am Hrant Dink.” Shortly after, Patrick Azadian wrote a reflective piece questioning the validity of that statement on both sides.

“Are we really Hrant Dink?,” he wrote.”Dink is still not fully understood in Turkey nor the Diaspora. So forgive me for feeling that the slogan “We are all Hrant Dink” can ring hollow at times.I leave you with a few simple thoughts: To my Armenian brothers and sisters: “Are we willing to free ourselves of our genocide-centric identity? How long will we allow an outside entity to dictate our actions? ”To my Turkish cousins: “Is your collective conscience clear? Are you proud of what your ancestors did to mine?”

We are not Hrant Dink.”

I don’t think I can say it any better, so I will refrain from doing so, but what I will say is that I hope his dreams of understanding, communication and the ability to forge relationships free of hate, ignorance and bigotry from both sides can one day come to fruition. We owe it to him to see that it does. See you on the other side, Mr. Dink and lastly, thank you. Thank you for making such an enormous, progressive contribution to this collective culture. You, not the uncompromisable, flag yielding, blind masses are one the many reasons why I am proud to call myself Armenian as well as a journalist.

Documentary About Hrant Dink to be Shown in Istanbul