By Contributor February 10, 2010 in Armenia, The Melting Pot 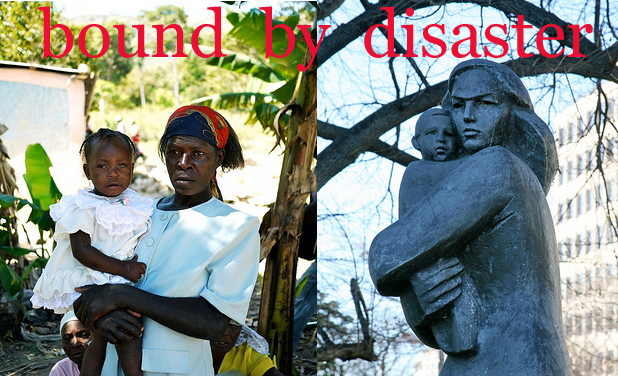 A Haitian woman and child wait for aid after the Jan.12 earthquake. A statue commemorating the 1988 Spitak earthquake in Washington D.C. Creative Commons/Photo Illustration by ianyanmag with photos from markyturner and nostri-imago

Chad Isenhart is a 20-something missionary from Tacoma, Wa. in a unique position. Like most people his age, Isenhart has done some traveling, however unlike his peers who jet off to exotic locales like Cabo San Lucas, Hawaii or Ibiza, he has been spending time in  El Salvador, Moldova, Nicaragua and Georgia and participating in humanitarian aid and relief projects and compassion ministry. Currently  in Armenia with the same goals in mind, Isenhart has also spent time in Haiti, where he maintained a feeding program and distributed food to 12,000 children a day. He was drawn to Armenia and Haiti, two countries who will now forever share a bond over the death and destruction caused by a massive earthquake,  for much of the same reasons: to help people.

In Haiti, Isenhart worked to provide health training and education as well as working to get clean water to Haitians through water filtration.

“We worked all over the country,” he said in an e-mail interview. “We have a school and orphanage across the bay from Port Au Prince, and can see the city from where we stayed, but worked in schools and villages all over the island, sometimes hiking into the mountains to deliver food by donkeys.”

Now in Armenia for a two year visit, in which he hopes to accomplish much of the same, Isenhart sees similarities in both countries beyond natural disasters.

“Both countries have both very poor and very rich,” he said.  “Though not as visible in Haiti because if they have money they usually leave. But many people in both countries that are just trying to make it by, surviving on what they can grow, make, or sell on the street or in a market.”

Though Isenhart calls his experience in Armenia so far as “amazing,” citing the culture, food, people and natural beauty of the country as positive factors, it was ultimately the poverty he saw while visiting a year and a half ago that led him to come back.

“I saw the needs that people do have in rural areas in villages, that they do not have access to a lot of things and many don’t have a way of getting themselves out of that state of poverty,” he said. “Also, because Armenia isn’t a place that many people think of. Forgotten by most of the world, but a country with many conflicts and hardships throughout its history, and I didn’t want to be another person who saw the needs and forgot about them. I believe that God has a great place and purpose for Armenia and its people.”

He feels the same way about Haiti, the poorest country in the Western hemisphere whose death toll from the disaster has risen to over 200,000. He said  it would be interesting to see if the aid pouring in from countries around the world will help Haiti become self sustaining and further its development.

In the wake of  the earthquake, AGBU, the world’s largest Armenian nonprofit organization donated $50,000 directly to Haiti earthquake victims. The Eastern Diocese and the Fund for Armenian Relief raised $30,000 through contributions, which will be distributed through Church World Service. Individuals like Aris Hovasapian of Sherman Oaks, Calif. also donated via text message and through a credit card company that promised to match the amount.

Seeing photos of the devastation and reading the news, while knowing how poor the conditions in Haiti were before the earthquake, were the major factors why Hovasapian decided to donate. He also added that it was easy and convenient to donate this time versus previous disasters.

Edmond Terakopian, a London-based photographer cited the connection between Armenia and Haiti as a reason to offer support.

“As survivors ourselves, it’s our duty and responsibility to help others in their darkest hour,” Terakopian said.
Although a 52-member team of earthquake recovery specialists from Armenia were ready to offer assistance to Haiti, the United Nations had not extended an invitation to the country, according to ministry spokeswoman Susanna Abrahamyan as reported by ArmeniaNow.

The 1988 Spitak earthquake claimed 25,000 lives and its aftershocks of poverty are still present in Armenia, with thousands of families still suffering from poor living conditions.