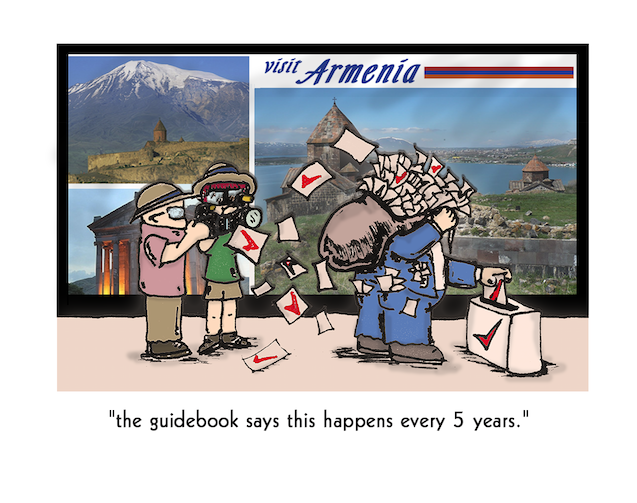 On May 5th residents of Yerevan will go to the polls to elect the 65-member Council of Elders, one of whom will become the Mayor of Yerevan. The mayoral election is Armenia’s last election until the parliamentary vote in 2016, and is thus the last opportunity for several years to redistribute power among the country’s leadership. Because the government’s power in Armenia is concentrated so significantly with the executive branch, the system of checks-and-balances functions at a rather low level.

Yerevan is home to between one half and one third of Armenia’s population but wields a hugely disproportionate influence. As the Capitol and focus of most of the nation’s economic and intellectual life, whoever is Mayor of Yerevan oversees the vast local government apparatus and thus wields significant power in the country. As a key elected official, the Mayor could serve as a powerful check on abuse by the President.

However, Yerevan’s current mayor, Taron Margaryan, is a member of the ruling Republican Party (HHK), the same party to which President Serzh Sarkisyan belongs. The fact that the President and Mayor belong to the same political party frustrates the hopes of many who seek a proper check on presidential power, which they see as crucial for Armenia’s modernization and development. If, on May 5, a candidate from an opposition party were elected Mayor, political power in the country would be divided in a new balance, and through political competition the power of Armenia’s citizens could be strengthened. Of course, as with any election, a crucial goal for May 5 is that the process is democratic, free from fraud, and legitimately representative of the people and their interests.

As most in the diaspora know, Armenia held a presidential election on February 18, the outcome of which was hotly contested. Reports of voter fraud and public demonstrations demanding a recount have gone unanswered, leading to lingering doubts about the legitimacy of Armenia’s democracy. A win for an opposition candidate in the mayoral election could help Armenia’s emergence as a nation genuinely struggling to democratize and employ the rule of law.

How the Election Will Work

Under Armenia’s electoral laws, municipal elections differ in important respects from those with which we are familiar in the West. Here are points to keep in mind:

1. Yerevan residents will mark their ballots for one political party, rather than for individual candidates.

2. Each party vies for seats on the Council of Elders, and is awarded the number of seats proportional to their percentage of the total vote.

3. The parties have already selected their leading candidate, who will automatically become Mayor if the party receives 40% or more of the votes.

4. If no party receives over 40 percent of votes, the elected members of the Council of Elders will hold its own vote to choose the Mayor.

5. Six political parties and one bloc will be on the ballot, including:

6. Voters will vote in 464 polling places in 13 electoral districts in Yerevan.

7. Although there are a number of political parties in Armenia that label themselves opposition, their past history of coalescing with the ruling party indicates that they may not be a true opposition but something closer to political nomads that shift loyalties when convenient.

8. Because it is entirely possible that no party will get 40% of the votes on May 5th, designating the Mayor may very well fall to the Council of Elders. In such a scenario, the opposition will have an opportunity to form a coalition to unseat the Republican Party incumbent Margaryan. The formation of a coalition among parties seeking to replace Margaryan – including Prosperous Armenia, Armenian National Congress, Dashnaktsutyun and Barev Yerevan – is currently under discussion.

According to Armenia’s Central Election Commission (CEC), more than 1,700 observers are set to monitor the election. An additional 100+ diasporan Armenians will serve as monitors, which makes this the first-ever diaspora election observation mission in Armenia. These diaspora monitors include nonresident Armenians who will travel to Yerevan specifically to participate in the observation mission, as well as diasporans currently living in Armenia, expatriates and others.

Stay tuned for additional updates as the May 5 election approaches.