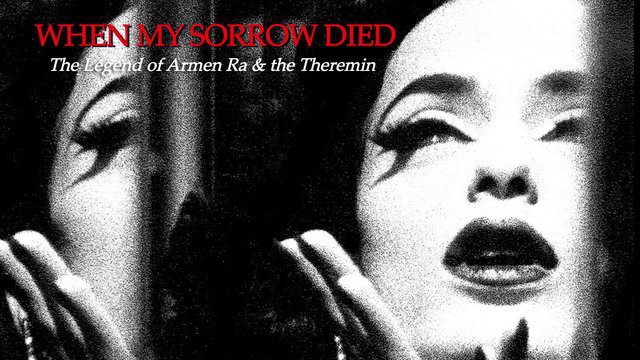 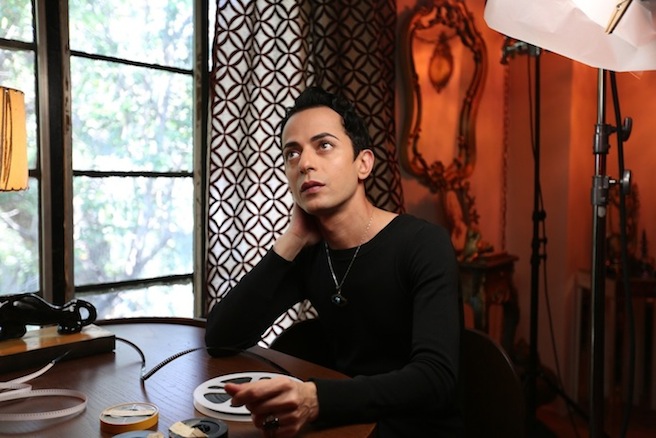 Armen Ra on the set of his new documentary, “When My Sorrow Died.”Courtesy, Production

There is no other way to describe Theremin virtuoso Armen Ra than beautifully intoxicating. Look deep within his eyes, those haunting, distinct Armenian eyes, and you’ll realize they are harboring stories beyond your wildest imagination.

The Iranian-Armenian Theremin virtuoso’s life has been peppered with ups and downs – from traveling the world, to escaping a revolution, enduring the often traumatizing experience immigrants face in a new country, making a name for himself in the New York club scene, falling face first into alcoholism and drug addiction and watching his friends die of everything from AIDS to suicide. But more than a decade ago, he taught himself and mastered the Theremin, the first electronic instrument invented in 1920 by Russian physicist Leon Theremin. Mesmerizing audiences across the nation, Armen Ra (whose stage name is appropriately derived after powerful Egyptian deity Ra) found his true, godly calling and the world it seems, is infinitely better off for it.

Now, with the help of two young, ambitious filmmakers, documenting the turns his life has taken is becoming a full fledged reality.

“When my Sorrow Died: The Legend of Armen Ra & the Theremin” is the work of producer Matt Huffman and director Robert Nazar Arjoyan – the former a neighbor of Armen Ra, the latter an admirer of his music – who met through their subject and have just wrapped up raising over $25,000 through crowd funding website Indiegogo  to film and produce a documentary on his life. 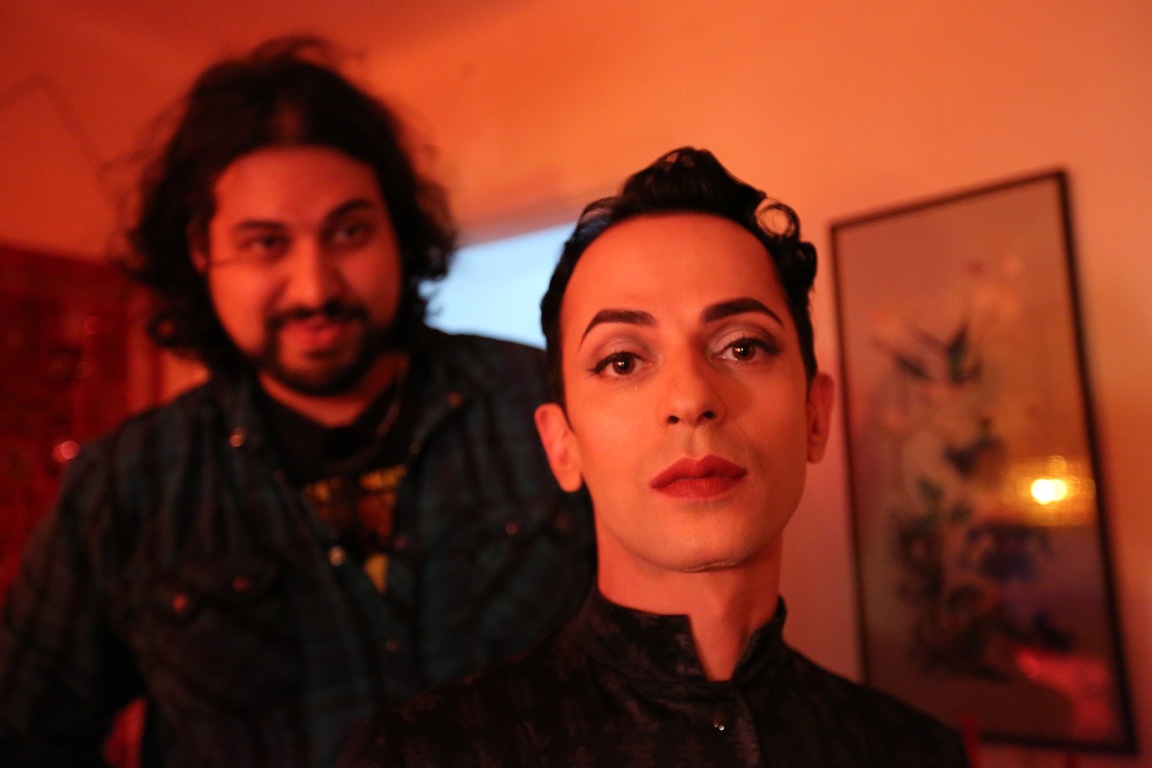 Armen Ra and a member of the film crew during the shooting of “When My Sorrow Died.” Courtesy, Production

It’s a story that began in the most unlikeliest of circumstances with Hollywood as an appropriate backdrop.

A few years ago Armen Ra moved upstairs in the old apartment building in Hollywood where Huffman was living and soon they became friends. At first Huffman couldn’t believe the tales Armen Ra kept telling him.
“I started calling bullshit on him, because they were really crazy stories,” Huffman told Ianyanmag. “He kept swearing he had film pictures, everything.”

As a celebrated drag queen in NYC, Armen Ra commanded the attention of everyone from Tim Burton to Andy Warhol and Salvador Dali, but his rise to fame also came with serious downfalls: homelessness, shame and self-destruction.

When Huffman took a step back to listen and write down some of the stories, things began to take shape. When Arjoyan, who had first contacted Armen asking to use his music for a film after he came across a performance of his on Youtube, joined in, the stage was set for a beautifully strung narrative about the rise, fall and then rise again of Armen Ra. The young director, who had previously worked on short film “Midnight Fistfight,” brought a much-needed perspective – mainly when it came to Armenian culture.

“Naz was a great director who has a lot of sensitivities around some of the things I did not,” Huffman said.

The trio are currently shooting the documentary, combining old footage from Armen Ra’s past with new interviews. Arjoyan describes the future film as having more than enough surprises, which he hopes the audience will appreciate.

“I think they’re going to get something they’re not expecting, in terms of what one movie can offer,” he said. We’re going to span a lot of emotions, because Armen’s life has a lot of ups and downs.”

Director Robert Nazar Arjoyan during filming of “When My Sorrow Died.” Courtesy, Production.

For Armen Ra, the retelling of his life story is a necessity in more ways than one. He wants to heal and move on, but also seeks to preserve the best he’s ever felt – and looked – on film before, well, age sets in.

“This story needs to be told, this story has to be told,” he said. “I need to tell this story so I can leave this story behind and get on with making the next story. I’ve had a lot of trauma, starting with the Revolution and a thousand other things.It’s been harrowing and therapeutic simultaneously.”

Plus, he says, he’s not as young as he looks.

“Time is ticking, I wanted to document the music and the beauty, because it’s holding on by a thread.

It’s about more than just vanity, though. It’s also about sending a message of solidarity he wishes he had while growing up. 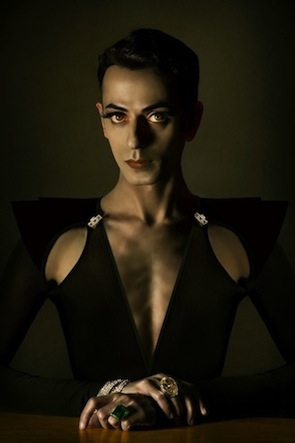 “When I think about the whole picture I think about young kids, I think about me a t the age 10 to 15, and how I had no one to look up to in the media, anywhere,” he said. “There was no one really like me. And I didn’t have anyone to relate to, I imagine this could be very very empowering.”

His unique, gender-bending look has often been misunderstood – “people are very uncomfortable with androgyny because it attracts every body,” he said.

But Armen Ra’s delicate feminine and masculine balance and foray into the music industry couldn’t have held up if it wasn’t for his supportive and open minded family.

“I couldn’t as an Armenian thrive and blossom in any other family,” he says. “I was placed here for a reason. I’m from the Armenian Adams Family. We’re perfectly normal and I’m just like them. No one ever told me I couldn’t do anything. Even if they knew I couldn’t. There’s stories in the film of me attempting things that I shouldn’t have, but my mother never said no you can’t.”

But just how did a club kid with a knack for entertaining stumble upon and master a virtually impossible to master instrument that is played without any physical contact? 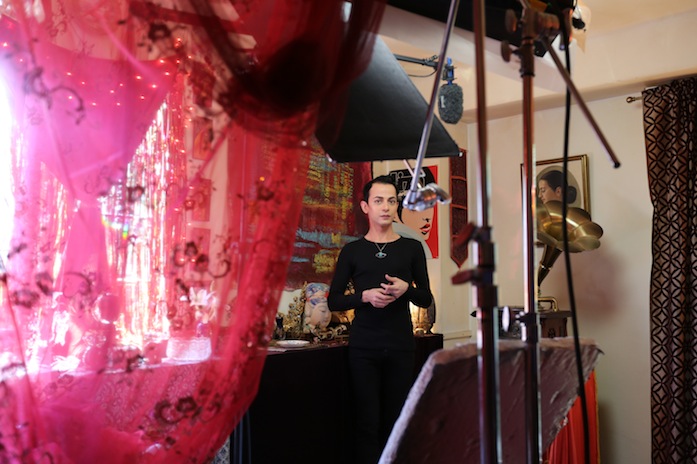 Armen Ra at his home during the shooting of “When My Sorrow Died.” Courtesy, Production

It was divine intervention, he says, a gift from the gods. The moment he knew he had found something he could be really good? “Indescribable.”

“It was really like opening the door to a cave of treasures and just looking in for the first time, but not stepping inside yet,”he says. “I saw the future but then I realized there was a lot of work between now and the future that I saw, I could tell this instrument and I were compatible.”
So he poured his time and energy into mastering the Theremin, practicing for hours on end every day until they both came to an understanding that from now on, they were meant to be a team. That was 12 years ago. Since then, his work has earned him bookings at venues like the United Nations, Knitting Factory and the Museum of Modern Art and unanimous praise.

In 2010, he released his debut album, “Plays The Theremin,” a collection of Armenian folk music and laments, including “Dle Yaman,” all played on the Theremin. The album has been called “haunting” and “beautiful.”

As the documentary gets well underway, Armen hopes the film sends a message of resilience to audiences.

“If you’re going to think about judging other people, you never know what that person has inside of them, what they can offer or what they’ve been through,” he said. “I really want to empower young, gay transgender teens to be strong and stand up for themselves.”

To keep up with the making of “When My Sorrow Died,” follow along on Facebook.  To learn more about Armen Ra, visit him here.

Watch Armen Ra perform on the Theremin below:

When My Sorrow Died: The Legend of Armen Ra & the Theremin