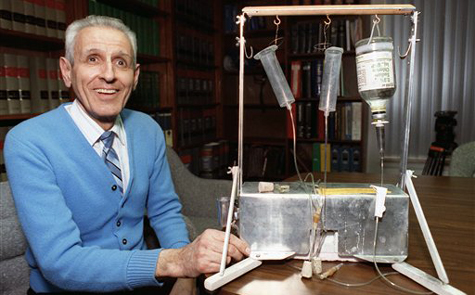 Kevorkian with his 'suicide machine' in 1991

Perhaps the most infamous Armenian for decades, Jack “Dr. Death” Kevorkian has assisted hundreds of patients in ending their lives and served eight years of a 10-to-25-year prison sentence because of it. Now, Kevorkian, who said that “dying is not a crime,” is the subject of the upcoming HBO film “You Don’t Know Jack,” where Al Pacino is set to star as the doctor.

The film, based on the book “Between the Dying and the Dead,” written by Harry Wylie and Neal Nicol about Kevorkian will be directed by Barry Levinson (Rain Man, Wag The Dog)

Though no release date is currently set, the film is currently in post-production and has a working title of “Kevorkian.”

Kevorkian, who was born to Armenian parents in Pontiac, Michigan and publicly championed a terminal patient’s right to die for 20 years, first began advertising himself as a physician consultant for “death counseling” in 1987. He allegedly only assisted the 100 terminally ill people  to die between 1990 and 1998 by attaching them to a euthanasia device he had made, in which the patient pushed a button that released drugs or chemicals to end his or her life. His physician assisted-suicides which highlighted the issue of a person’s right to die aided in the passing of the Death with Dignity Act in Oregon, which became the first state to legalize assisted suicide in 1994. Washington, Montana and Oregon are currently the only states where assisted suicide is legal.

In addition to his career as “Dr. Death,” Kevorkian was an accomplished painter and jazz musician, having released “The Kevorkian Suite: A Very Still Life” in 1997 with a limited release of 5,000 copies. The Ariana Gallery in Royal Oak, Michigan is the exclusive distributor of Kevorkian’s oil paintings.

You can find vast information on Kevorkian’s life and the debate over euthanasia on Frontline.