In this edition of “Overheard on the Net,” it looks like I’ll be giving everyone a geography lesson because apparently, there seemed to be an ongoing trend about many people inquiring about the whereabouts of Armenia. Look, I get it. It’s the smallest possible country on a map. In fact, you might need some glasses. The question here isn’t “why don’t you know where Armenia is,” because let’s face it, up until last year, I didn’t know where, say, Eritrea was – the bigger question is, why must you post your ignorance, however innocent it may be, for all the world to see on the web? Let’s get to the goods, shall we?

Oh dear. Well, let’s starts off by saying that no, Armenia is not Russia, nor was it ever Russia.It was however, part of The Union of Soviet Socialist Republics since 1922 (that’s USSR to you), as the third comment, albeit laced with profanity has found out, sort of.  Armenia was under Soviet communist rule during the reign of Joseph Stalin, Nikita Khrushchev and Gorbachev. When the Soviet Union broke up in 1991, Armenia re-established its independence or tried to anyway. There was the Nagorno-Karabakh war, which cost an estimated 30,000 lives as well as the devastating Spitak earthquake in 1988 and other events. Despite its hardships, it is the 28th most economically free nation in the world and its trade with Europe and the Middle East is on the rise. Still, Armenia has a long way to go. Why you ask? For reasons which I can’t go into here because I’ve got some dolma waiting for me, but will probably go in to later at some point or another. 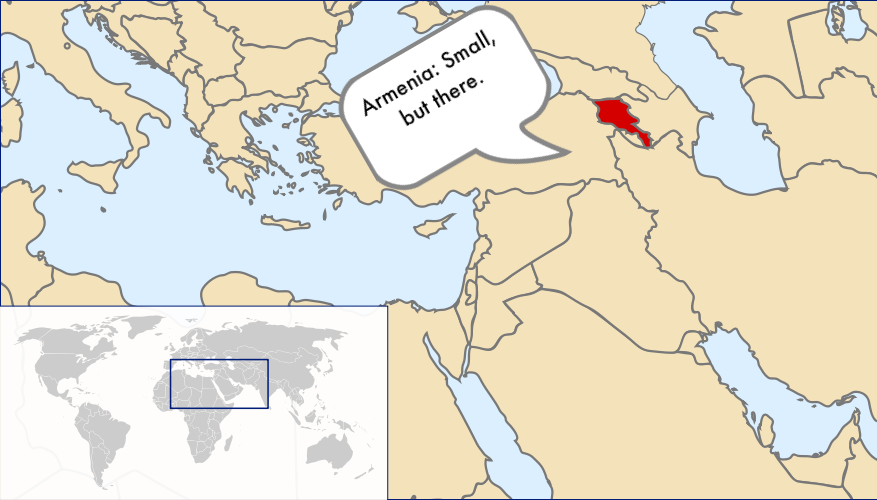 @KimKardashian where is Armenia?

@KimKardashian I was wondering just where in the Carribean is Armenia

Really? You’re asking Kim Kardashian, whose claim to fame lies in a leaked sex-tape and a reality show, where Armenia is? Also, newsflash: Armenia is NOT in the Caribbean, mainly because its located in the Middle East and it’s the Caribbean not Carribean. I feel silly just typing that out. You know, what really surprises me about all these pertinent questions is not that you don’t know where Armenia is, but that you are a) letting the world know that you don’t know and b) you’re too lazy to just Google it. Really guys, it’s easy. You don’t even need directions.

To learn more about Armenia, go here, here and here.