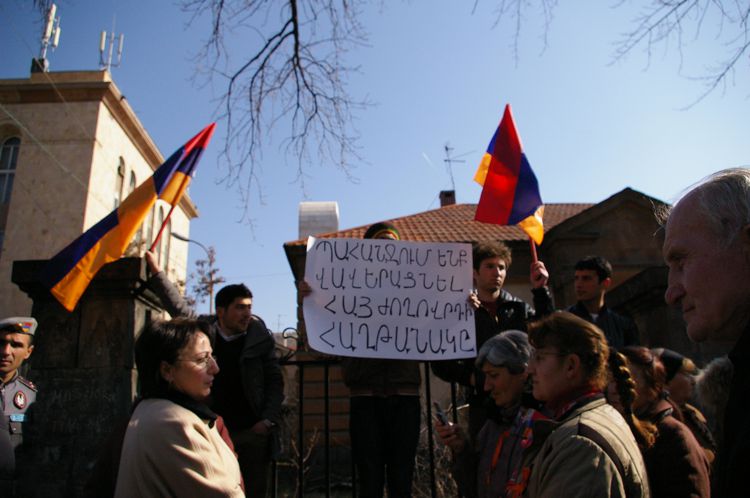 A man at a Barevolution rally holds up a sign that reads "We demand the validation of the Armenian people's victory" in Armenian. by Anush Khachatryan 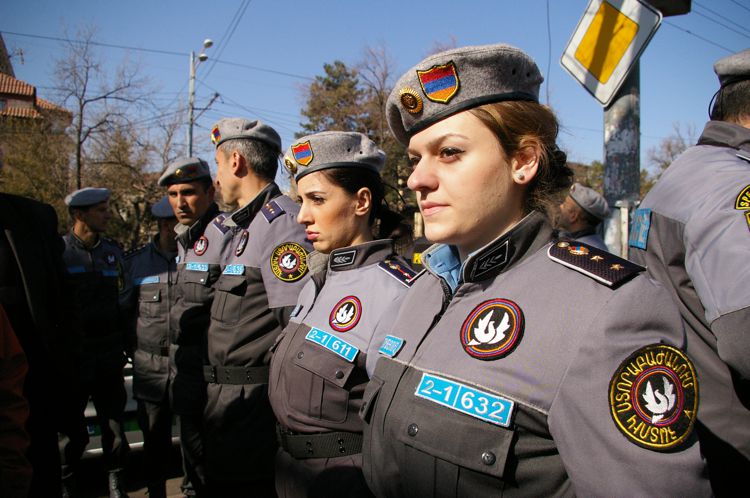 Security detail at a Barevolution rally. by Anush Khachatryan

A man carries his daughter, who waves an Armenian flag at a Barevolution rally. by Anush Khachatryan

Barevolution rallies have been held since the Armenian Presidential Elections on Feb.18, 2013. by Anush Khachatryan

It is just after 9 am on day six of Raffi Hovannisian’s hunger strike on symbolic Liberty Square, in protest of the elections the opposition believes were stolen from the Armenian people, who he insists are indeed the victors. Only a few of the thousands of visitors he will receive throughout the day linger nearby, in support of his protest and the movement known as the Barevolution, sponsored by his Heritage Party, the ARF-Dashnaktsutyun and various dynamic political figures including the presidential candidate Andreas Ghukasian and Nikol Pashinian, who is affiliated with the Armenian National Congress. The metal park bench on which he sits is draped with a crocheted red, blue and orange quilt sporting the same colors of the Armenian flag. At arms length a crackly radio plays Armenian popular and folk music while he thumbs through a newspaper and is briefed by one of his sons sitting beside him.

Hovannisian is clothed in his now trademark revolutionary uniform–a navy blue wool turtleneck sweater and matching scarf with narrow orange and red stripes running its length. His bronzy face is tanned from prolonged exposure to the sun as there is virtually no shade in the spot where he sits most of the day, not that he is complaining. For him, it’s all about being there for the people, and his nourishment is the unwavering support they give him around the clock. The authorities led by incumbent Serzh Sargsyan continue their refusal to compromise with Hovannisian–and thus the people–to hold a second round of presidential elections and snap parliamentary elections after switching to a fully proportional system of representation, and to bring election violators, namely public servants at various levels, before the law.

I sat down with him to probe the mind of a man that is emphatically dedicated in the pursuit of Armenian citizens’ rights to a lawful, free democratic society.

Q. The constitutional court has rejected the opposition’s appeals, and now you plan to hold public forums at Liberty Square for five days straight starting on March 17 where views can be exchanged about Armenia’s future. But that still leaves us with your “over my dead body” quote in reference to Sargsyan taking the oath for a second term on April 9. You have also said that you were ready to die for this movement. This suggests a forewarning that there could potentially be an outbreak of violence. Do you think it will come to that?

A. No, it won’t. We will continue very steadily and constitutionally toward the end of a de jure presidency, regardless of the constitutional court’s decision.
This movement, the Barevolution, belongs to the Armenian people, which is so intangible and unpredictable for so many people who two months ago did not at all believe in themselves or each other, that they could emerge from their fatalism and hopelessness and take their destiny and constitution into their own hands. I am very proud of this movement and proud to be a part of it. I’m ready not only to die, but to live for it. I plan to serve the people for a long time but as I’ve said, this is not a fast or a hunger strike, this is the last stage in returning Armenia to the people and taking the victory of February 18 to a final summit on April 9, when together we will realize the inauguration of a new Armenia.

Q. Nevertheless, there is a segment of society that believes the only way to get through to certain members of parliament and government with reputations for being heavy handed is through violent means.

A. I rule that out. Whereas five years ago the call “until the end” meant blood or revolution, today based on the people’s candidacy that same slogan means a peaceful, constitutional quest for a de jure presidency. There shall not be blood, and I will not allow it. My initiative is not an ultimatum to anyone. It is a self-cleansing process for myself, and the entry to the final decisive stage in the struggle toward registering the victory of the Armenian people delivered on February 18.

Q. Wilfried Martens, the President of the European People’s Party–of which both the Heritage Party and Republican Party of Armenia are member organizations–warmly congratulated Sargsyan and praised the conduct of the elections while shrugging off claims of gross violations, insisting that he won fair and square. Similar glowing statements were made by leaders of the Council of Europe and the Council of Europe Parliamentary Assembly (PACE), the Armenian delegation to which includes Heritage Party MPs. In your opinion, why are relations between those entities and the authorities so cordial to the extent that they would not take a more objective, diplomatic stance on the election outcome?

A. What concerns me more is that we–the Armenian people who have brought democracy, the rule of law and faith in the homeland–are the masters of our own destiny. Although they [world leaders who have congratulated Sargsyan] stand against the people of Armenia and the democratic movement for their own geopolitical concerns and interests and support the candidacy of a gentleman whose official results as registered by the Central Election Commission were actually delivered by fraud, falsification, intimidation, multiple voting, taking soldiers to the polls, threatening teachers, using hospitals, schools, town halls and village cultural centers to post campaign materials of the incumbent president, there clearly is no basis to recognize the illegitimate official winner of the election. But as someone born in the U.S. who has been educated on the values of democracy, civil rights and constitutional law, I can say that these statements from world leaders fly in the face of their own principles. Armenia is one of the earliest sources of Western civilization. Let no one sermonize the Armenian people on democracy because they have delivered on their own constitution.

Q. Some believe that for this movement to have a broader support the Armenian National Congress has to come on board. What is impeding that from happening?

A. The Heritage Party and I have always been in favor of consolidation in all the elections in which we have participated. Right now I am open to discussing matters with anyone. Levon Ter-Petrosyan has acknowledged that I indeed won the election, but the Congress hasn’t sought to deepen that relationship.

But what’s important is that on February 18 the political model of Armenia changed. Citizens faced with a boycott of the elections by many political and civic groups said “no.” I believed in them, they believed in me, and together we brought victory. At this point it would be a sign of strength for political parties or civic movements, whether they participated in the elections or not, to announce that they are part of this movement. As I’ve said from the podium, the Heritage flag has been lowered because the people recognize that after a long period of labor we are about to deliver the new Armenia, in which political parties have to play a secondary role. They must know that no political party can be the pivot for Armenia’s future. Citizens and political parties have to reassess their roles to serve society. So I don’t think it is key that any two organizations come together. People should understand the gravity of the moment and come together. The people have spoken and we have to respect that choice.

A. I wouldn’t say they’re so important, but I am in favor of participatory democracy. You can’t curse the darkness, you have to light a candle, and the experience of the last two months demonstrated very well that by sitting on the sidelines you cannot bring about change. You have to participate and mobilize. I think the Yerevan elections are an opportunity not to replace this movement but be an offshoot of it. We will put together a broad-based list, which I anticipate will include members from civil organizations and other political parties, and the mayor and the majority of the city council will be appointed from that list. We’re going to every city and village that has an election, and we’re going to return public service to the people.

Q. What message can you give now to both your staunch critics–those who believe you have no plan, that your current action is a sign of desperation and the movement will not get anywhere–and your loyal supporters based abroad who are genuinely concerned about the direction in which the movement is headed?

A. I believe in free speech and I respect their opinions. I sometimes learn a lot from criticism when it’s founded and honest, but when it’s based on partisanship and hatred, that is not acceptable to me. Everything is going according to plan, and the plan belongs to the Armenian people. What differentiates today from five years ago and beyond is that this movement is no longer an individual-based quest for liberty and the presidency. This movement takes on the legacy of the past, the struggle of the Armenian people over the last 21 years to have a state that is democratic, rightful and sovereign in pursuit of its national interests. While I am the elected guide for the movement, it is not a one-man show and it’s greater than Liberty Square. If you were to travel with me to the villages and cities of Armenia, to the concerts, theaters, weddings and university squares on bus rides all around the country, you would see that there is a great sense of empowerment.

Before he died the poet Yeghishe Charents wrote in his acrostic, “Oh Armenian people, your salvation is in your collective strength,” and on election day the people put his message into action by saying “yes” to Armenia’s future. That future is based on a brand new plan that is not 100 pages long, but in terms of its implementation let it be clear that I know exactly where I am going. I also know that the Armenian people will guide me to that final summit.